The REBT Consequences Analysis Form is a form of ‘functional/pragmatic disputing’ and can be used to challenge and restructure irrational attitudes. The form guides the client to identify the consequences of a behavior and then encourages them to formulate the best long-term solution to their difficulty. 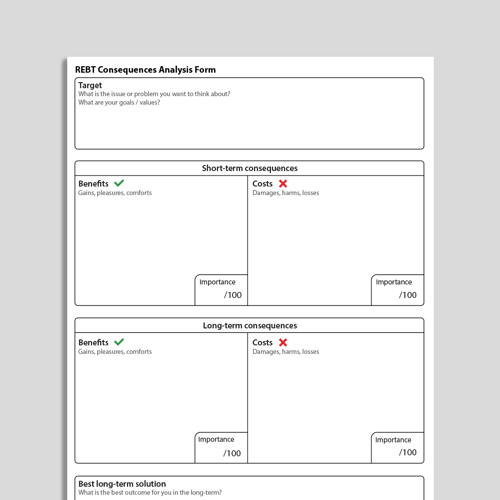 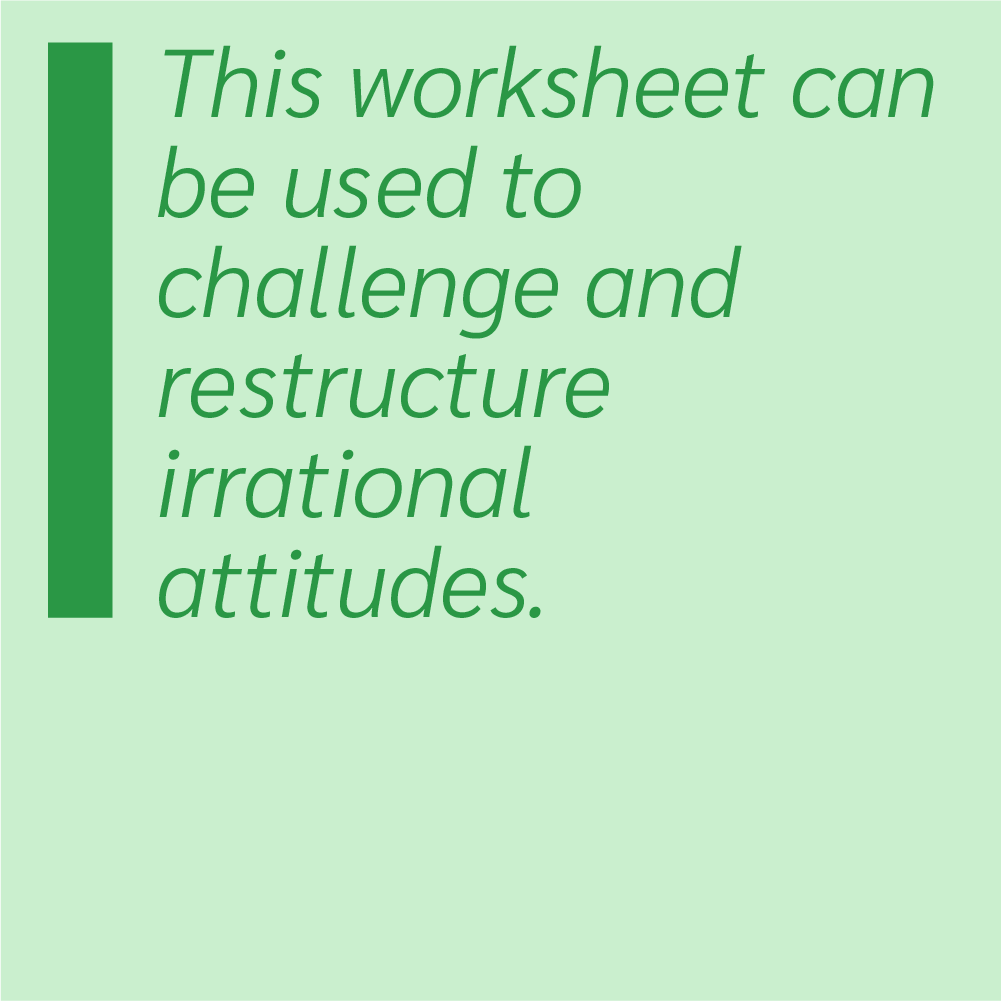 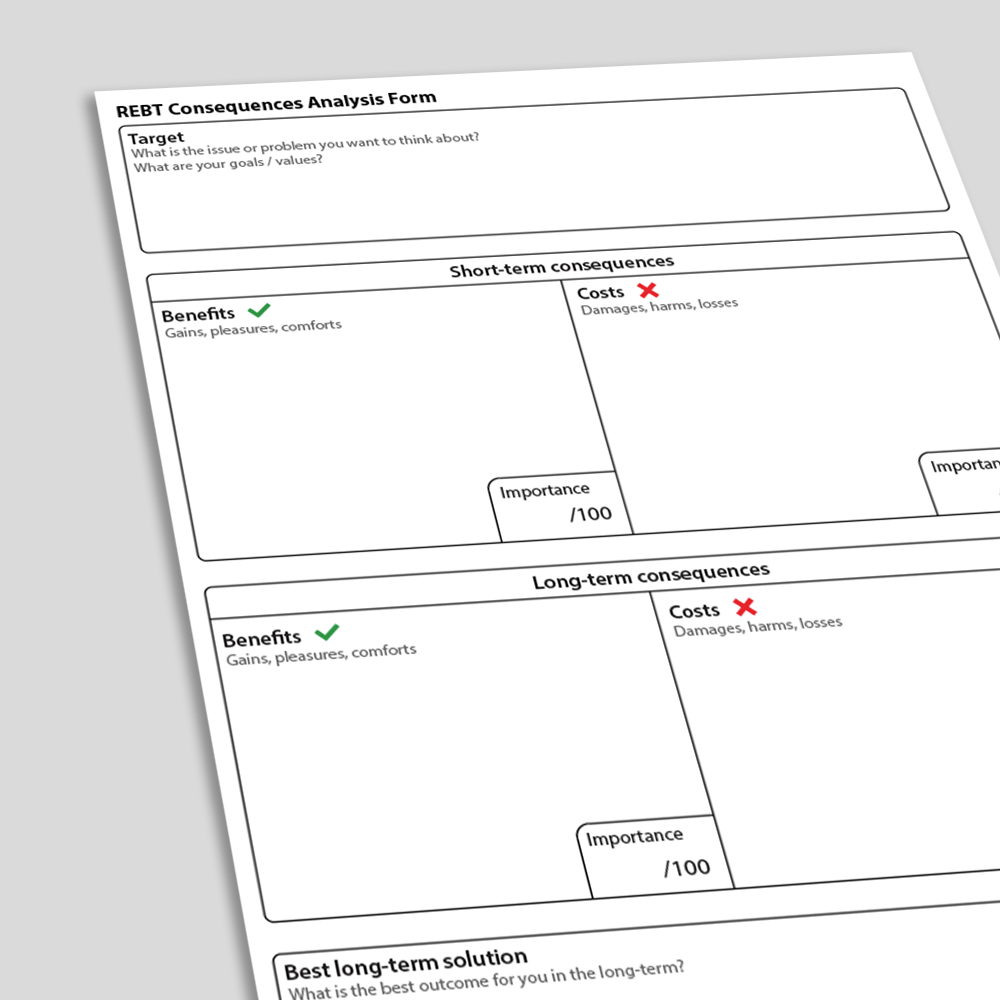 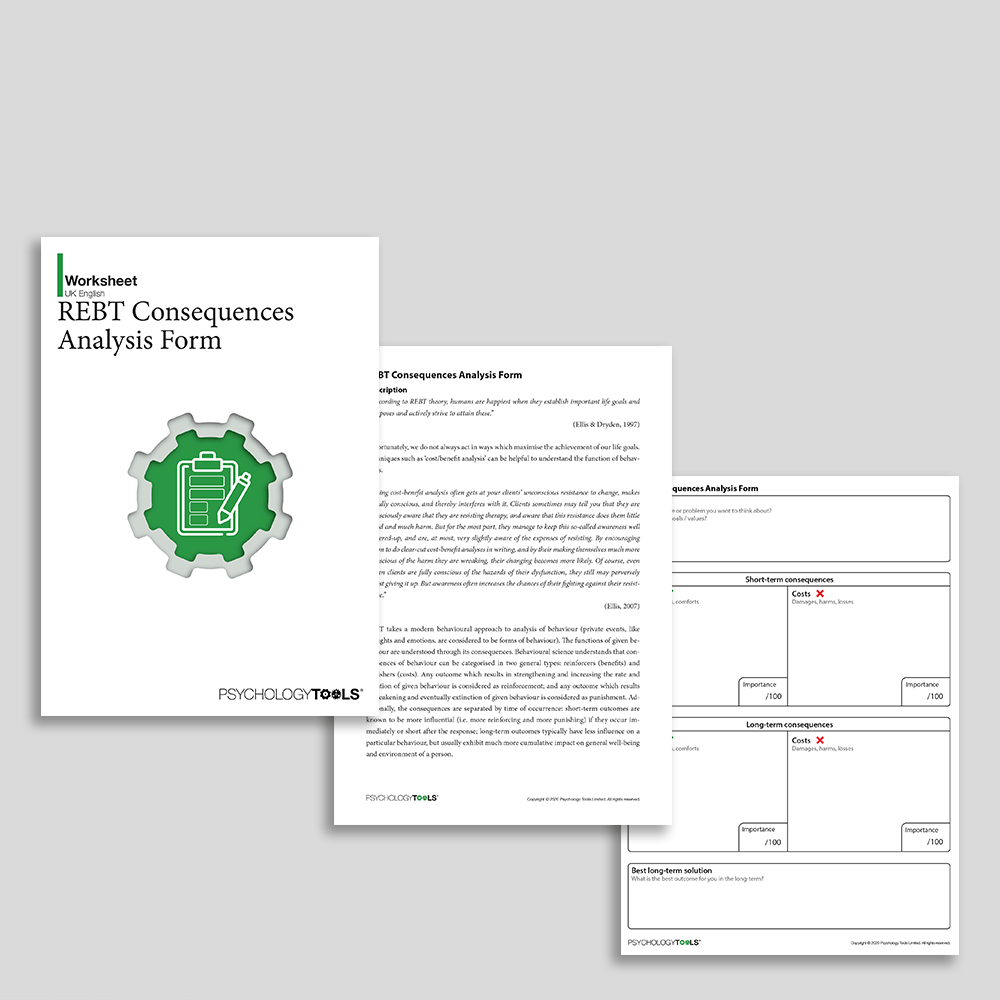 “According to REBT theory, humans are happiest when they establish important life goals and purposes and actively strive to attain these.” (Ellis & Dryden, 1997)

Unfortunately we do not always act in ways which maximise the achivement of our life goals. Techniques such as ‘cost/benefit analysis’ can be helpful to understand the function of behaviours.

“Using cost-benefit analysis often gets at your clients’ unconscious resistance to change, makes it fully conscious, and thereby interferes with it. Clients sometimes may tell you that they are consciously aware that they are resisting therapy, and aware that this resistance does them little good and much harm. But for the most part, they manage to keep this so-called awareness well covered-up, and are, at most, very slightly aware of the expenses of resisting. By encouraging them to do clear-cut cost-benefit analyses in writing, and by their making themselves much more conscious of the harm they are wreaking, their changing becomes more likely. Of course, even when clients are fully conscious of the hazards of their dysfunction, they still may perversely resist giving it up. But awareness often increases the chances of their fighting against their resistance.” (Ellis, 2007)

REBT takes a modern behavioral approach to analysis of behavior (private events, like thoughts and emotions, are considered to be forms of behavior). The functions of given behavior are understood through its consequences. Behavioral science understands that consequences of behavior can be categorized in two general types: reinforcers (benefits) and punishers (costs). Any outcome which results in strengthening and increasing the rate and duration of given behavior is considered as reinforcement; and any outcome which results in weaking and eventually extinction of given behavior is considered as punishment. Additionally, the consequences are separated by time of occurance: short-term outcomes are known to be more influential (i.e. more reinforcing and more punishing) if they occur immediately or short after the response; long-term outcomes typically have less influence on a particular behavior, but usually exhibit much more cumulative impact on general well-being and environment of a person. This worksheet was submitted by Max Ilin

The REBT Consequences Analysis Form (a form of ‘functional/pragmatic disputing’) can be used to challenge and restructure irrational attitudes. It can also be used for motvation enhanement and strengthening commitment to change. The client is encourage to identify a target issue or problem, and to identify associated life goals / values. The form then guides the client to identify the consequences of a behavior and then encourages them to formulate the best long-term solution to their dificulty.