Communicating and acting assertively is an interpersonal skill that helps people to maintain healthy relationships, resolve interpersonal conflict, and prevent one’s needs from being stifled or repressed. Assertiveness can be understood as relational style that treads a middle path between being passive and being aggressive. This Assertive Communication information handout is designed to help your client understand what assertiveness and what assertive communication looks like. It describes the qualities of assertive communication, and explores its differences from passive and aggressive communication. 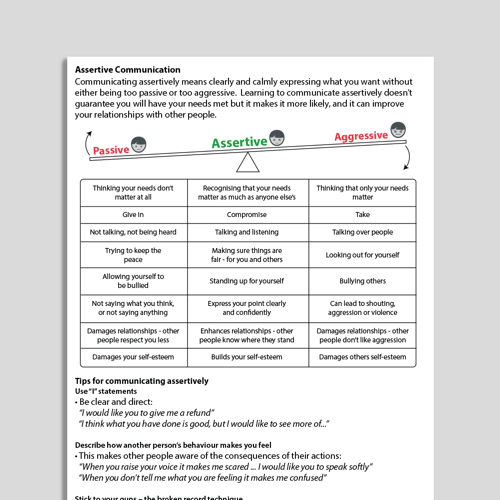 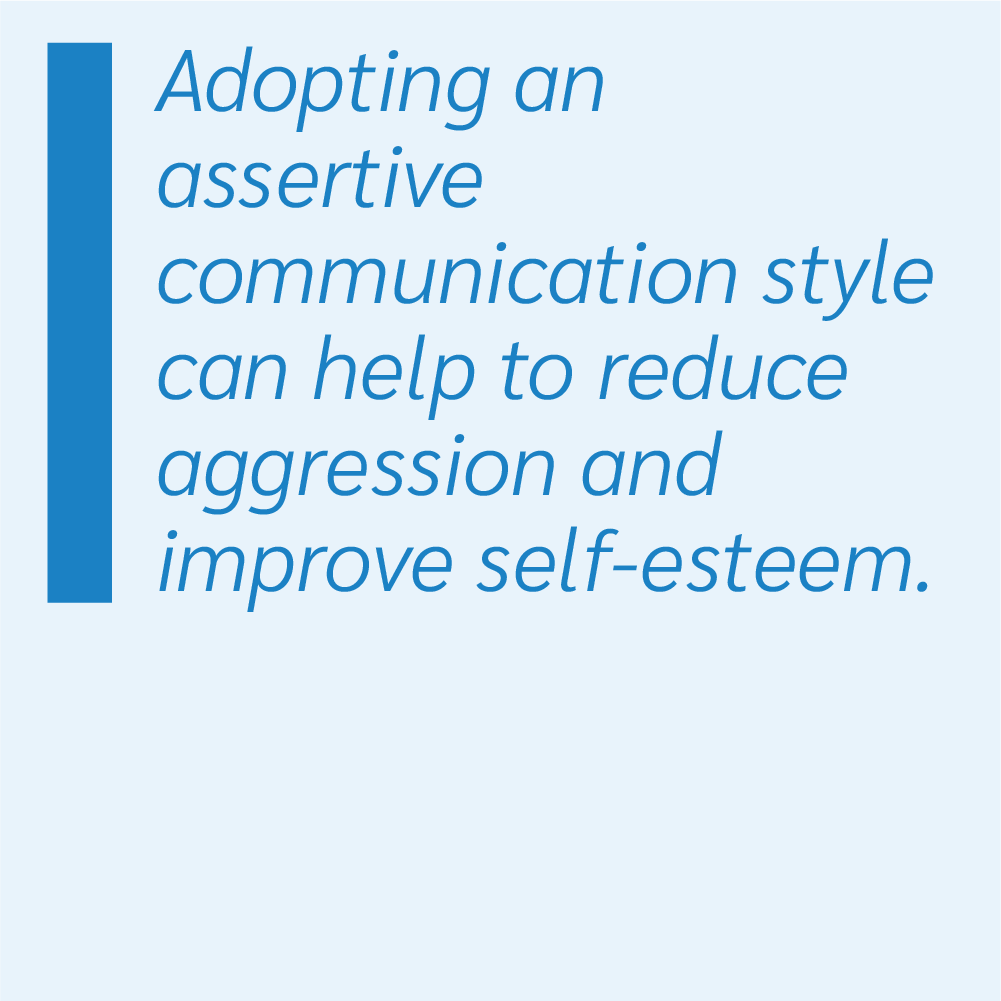 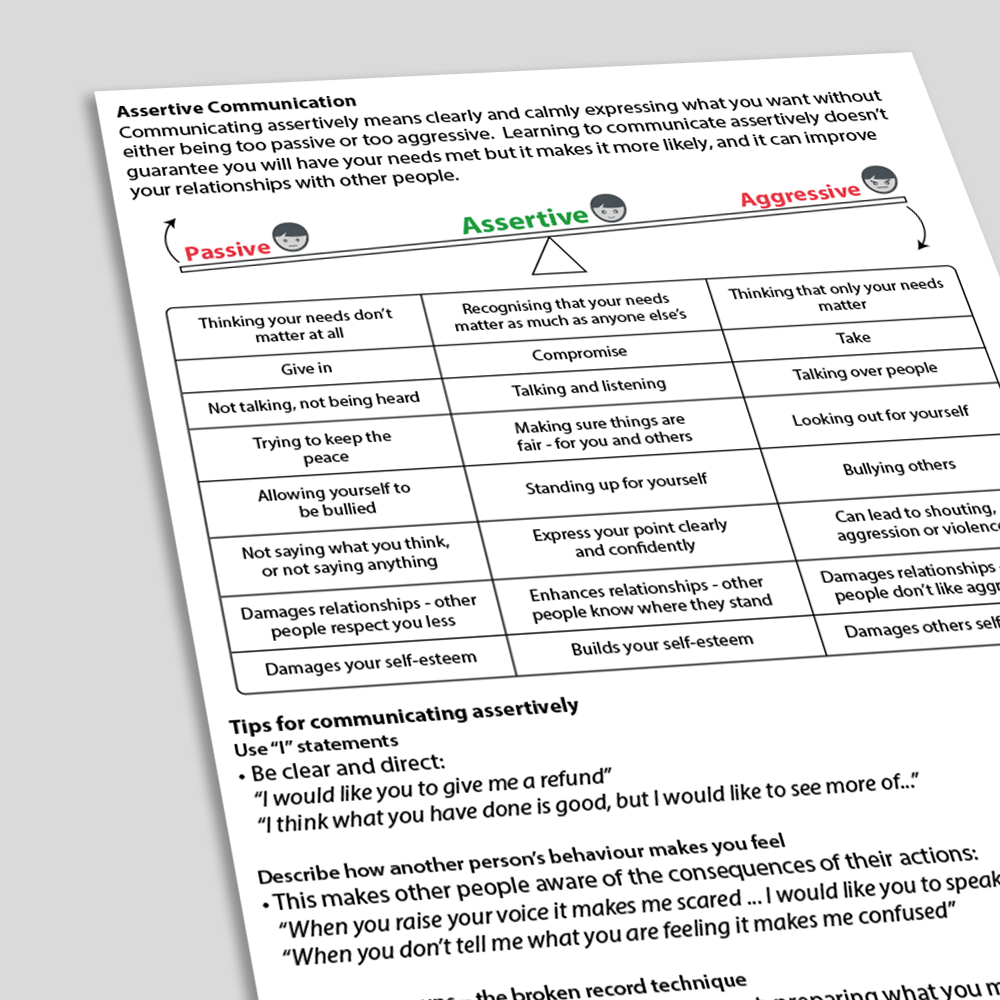 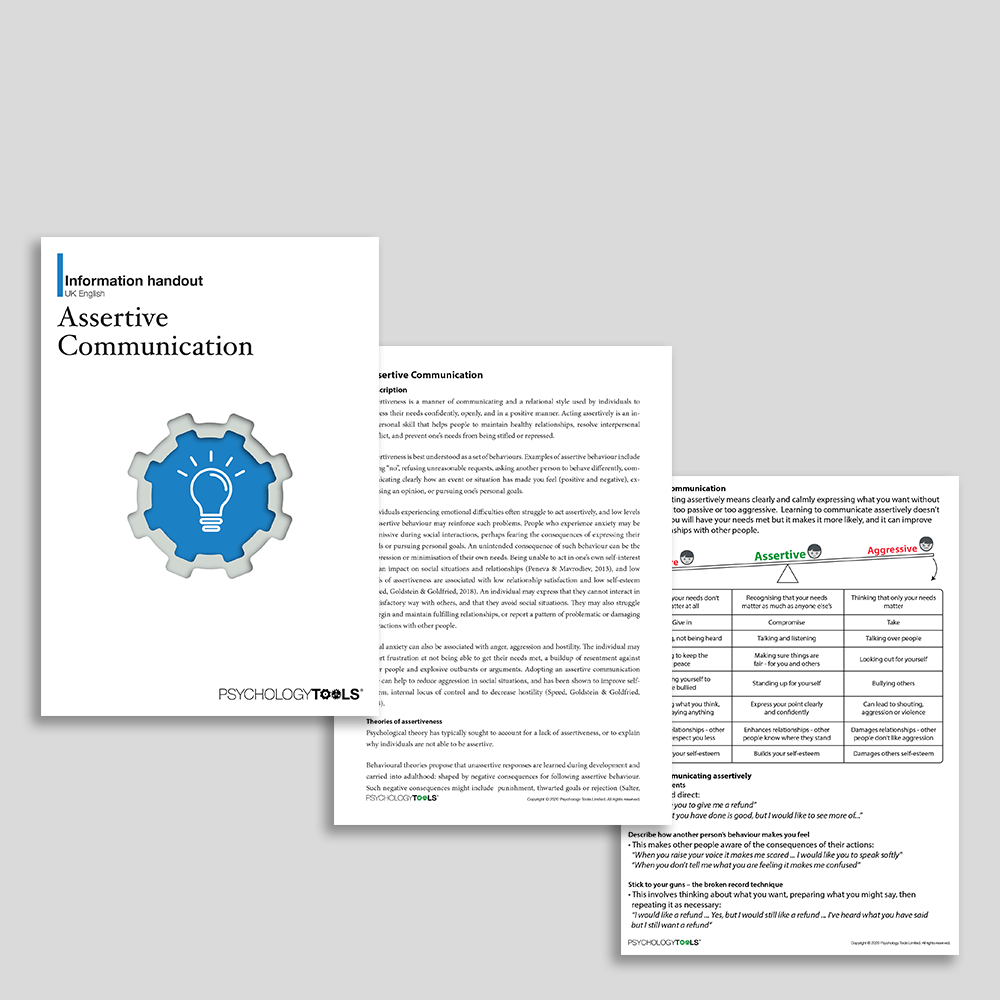 Assertiveness is a manner of communicating and a relational style used by individuals to express their needs confidently, openly, and in a positive manner. Acting assertively is an interpersonal skill that helps people to maintain healthy relationships, resolve interpersonal conflict, and prevent one’s needs from being stifled or repressed.

Assertiveness is best understood as a set of behaviors. Examples of assertive behavior include saying “no”, refusing unreasonable requests, asking another person to behave differently, communicating clearly how an event or situation has made you feel (positive and negative), expressing an opinion, or pursuing one’s personal goals.

Individuals experiencing emotional difficulties often struggle to act assertively, and low levels of assertive behavior may reinforce such problems. People who experience anxiety may be submissive during social interactions, perhaps fearing the consequences of expressing their needs or pursuing personal goals. An unintended consequence of such behavior can be the suppression or minimization of their own needs. Being unable to act in one’s own self-interest has an impact on social situations and relationships (Peneva & Mavrodiev, 2013), and low levels of assertiveness are associated with low relationship satisfaction and low self-esteem (Speed, Goldstein & Goldfried, 2018). An individual may express that they cannot interact in a satisfactory way with others, and that they avoid social situations. They may also struggle to begin and maintain fulfilling relation- ships, or report a pattern of problematic or damaging interactions with other people.

Social anxiety can also be associated with anger, aggression and hostility. The individual may report frustration at not being able to get their needs met, a buildup of resentment against other people and explosive outbursts or arguments. Adopting an assertive communication style can help to reduce aggression in social situations, and has been shown to improve self- esteem, internal locus of control and to decrease hostility (Speed, Goldstein & Goldfried, 2018).

Psychological theory has typically sought to account for a lack of assertiveness, or to explain why individuals are not able to be assertive.

Behavioral theories propose that unassertive responses are learned during development and carried into adulthood: shaped by negative consequences for following assertive behavior. Such negative consequences might include punishment, thwarted goals or rejection (Salter, 2002; Wolpe, 1990). Behavioral approaches propose that the deficit can be addressed with specific behavioral training (Heimberg & Becker, 1981) and that behaviors including eye-contact, posture, tone of voice, or specific verbal responses can be trained. These behaviors require targeted training because they are independent from one another. For example, research broadly supports the observation that training eye-contact will not automatically generalize to posture or vocal tone (Heimberg & Becker, 1981). Once these behaviors have been trained it is expected that they will be positively reinforced in the natural environment and therefore maintained (Heimberg & Becker, 1981).

Cognitive theories propose that unassertive behaviour arises from unhelpful beliefs that prevent an individual from being assertive during specific situations (Heimberg & Becker, 1981), and that social situations may trigger unhelpful beliefs and appraisals. Non-assertive individuals might hold negative self-beliefs (e.g. “I am unlovable”, “I am not good enough”) and dysfunctional as- sumptions (e.g. “If I say no I won’t be liked”, “If I say what I want then I’ll be punished”). Such beliefs affect how the individual appraises situations, leading to negative automatic thoughts such as “They’re going to leave” or “He’s angry with me”, which would result in feelings of anxiety, uncertainty in how to act, and the inhibition of assertive responses.

Assertiveness as a balanced response

Assertiveness can be understood as relational style that treads a middle path between being passive and being aggressive (Linehan, 2014; Butler & Hope, 1995). A person with a passive relational style gives in to requests and goes along with decisions or actions they may not agree with: they prioritize pleasing other people and being agreeable. However, this can result in feeling helpless and unable to enact change. The suppression of their own desires can lead to feelings of irritation, annoyance and frustration. As a result, passive behavior can also include crying, sulking and trying to coax or indirectly persuade people to do things (e.g. “I’m terrible at this, you are so much better”). This creates negative feelings in other people as they find the passive behavior tiring and contradictory. An aggressive relational style means that the individual does not listen to other people’s viewpoints. They may dismiss others’ needs, goals and feelings and requests are expressed as commands (e.g. “Get this down now, it doesn’t matter what you think about it”). This style of relating creates negative feelings in other people, and it will often result in the request being rejected or not being fulfilled. As a result, an individual who uses an aggressive approach may end up feeling frustrated or isolated.

Assertiveness includes both verbal and non-verbal behaviors. When using assertive verbal communication, an individual is able to describe the current situation, express what they need and want, explicitly consider the other person’s perspective, re-assert their own goals and consider mutually agreeable compromises that may lead to a resolution. Assertive non-verbal communication includes adopting an upright and confident posture, a clear and calm tone of voice, and use of direct eye contact especially when requesting or refusing.

Adopting these behaviors makes a clear demonstration that a person is not submissive. To com- plement this, active listening behaviors prevent the relational style from becoming aggressive. At a minimum active listening combines feedback to show that the other person is being heard (head nodding, minimal verbalizations such as “mm hmm” and “yep”) as well as summarizing and re- flecting back what the other person has said without passing judgement (“so you feel that…”, “you explained that….”, “you told me…”).

The handout can be used to explore client beliefs about assertiveness. You may find that a client shows an inconsistent understanding of the consequences of assertive behavior. When applied to their own lives, they might believe that an assertive response will lead to negative consequences such as rejection, disapproval, or confrontation; and trigger negative emotions in themselves such as guilt, shame and self-doubt. However, if asked about unassertive behavior in other people they can often recognize that it is damaging to the person rather than a means of avoiding negative outcomes.

“We’ve talked about how you find it difficult to get your needs met and ask for what you want when you are with other people. This sheet summarizes assertive communication, which is a way of being more confident when talking to other people. Let’s go through it together…”

“When we talk to other people, we can communicate in different ways. We can be passive, assertive or aggressive. This handout summarizes what those different ways of communicating look like…”

“How do you usually talk to other people? Do you think you are passive, assertive or aggressive?”

It is important to note that individuals may be unassertive in specific situations (e.g. within a specific relationship or in a specific setting) or following specific triggers, rather than it being a universal way of relating to others. This can add a sense of confusion and dissonance, as the individual knows that they are capable of being assertive.