Being able to communicate assertively is an essential skill for developing and maintaining healthy relationships and positive self-esteem. Individuals with anxiety may find it particularly difficult to be assertive when interacting with people who are dominant or aggressive. A key skill is to be able to respond to the style of an aggressor’s message, not its content. This Assertive Responses exercise worksheet guides clients through the practice of responding assertively to aggressive statements. 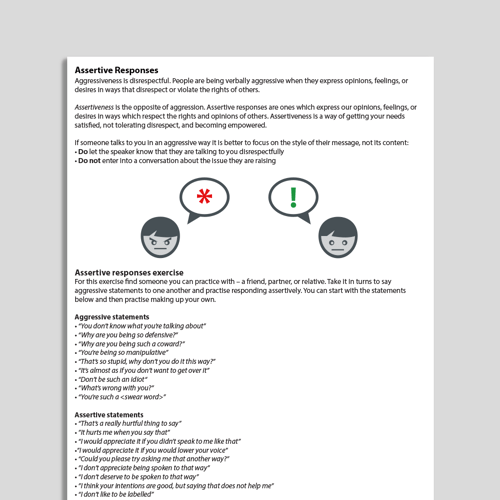 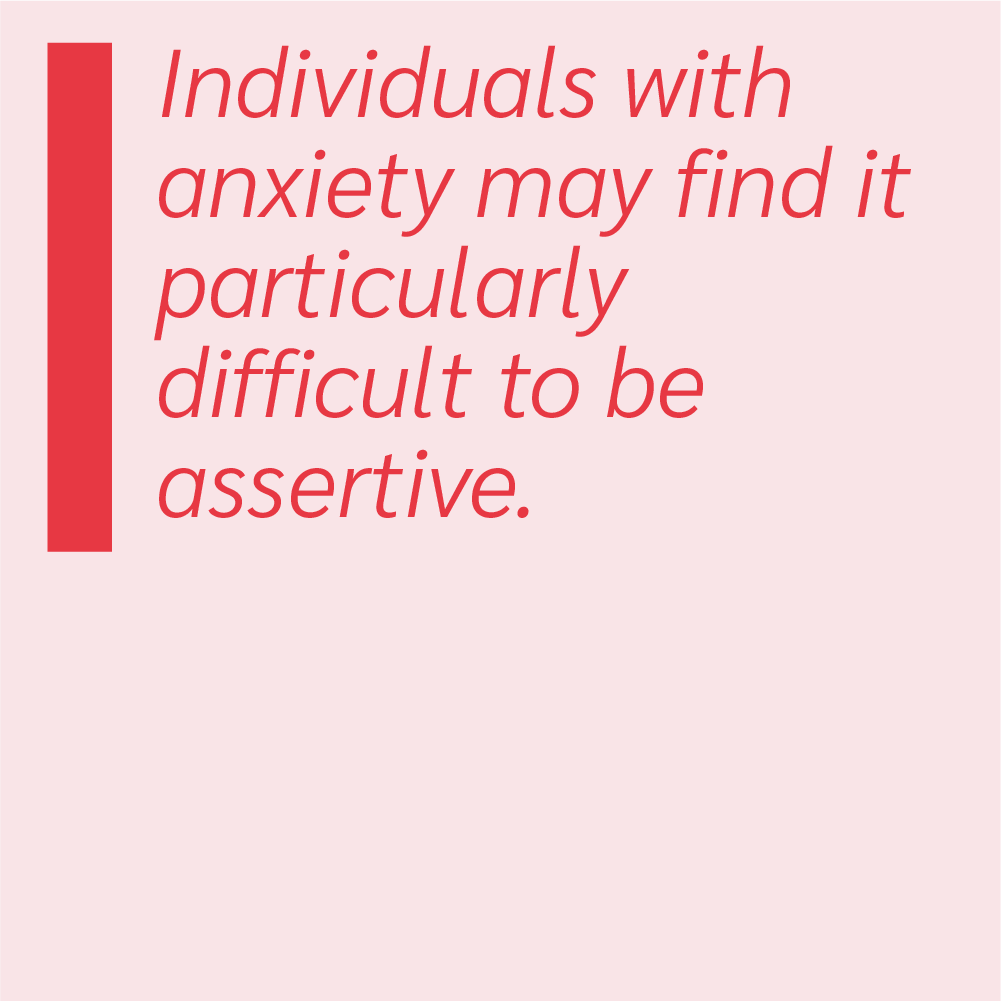 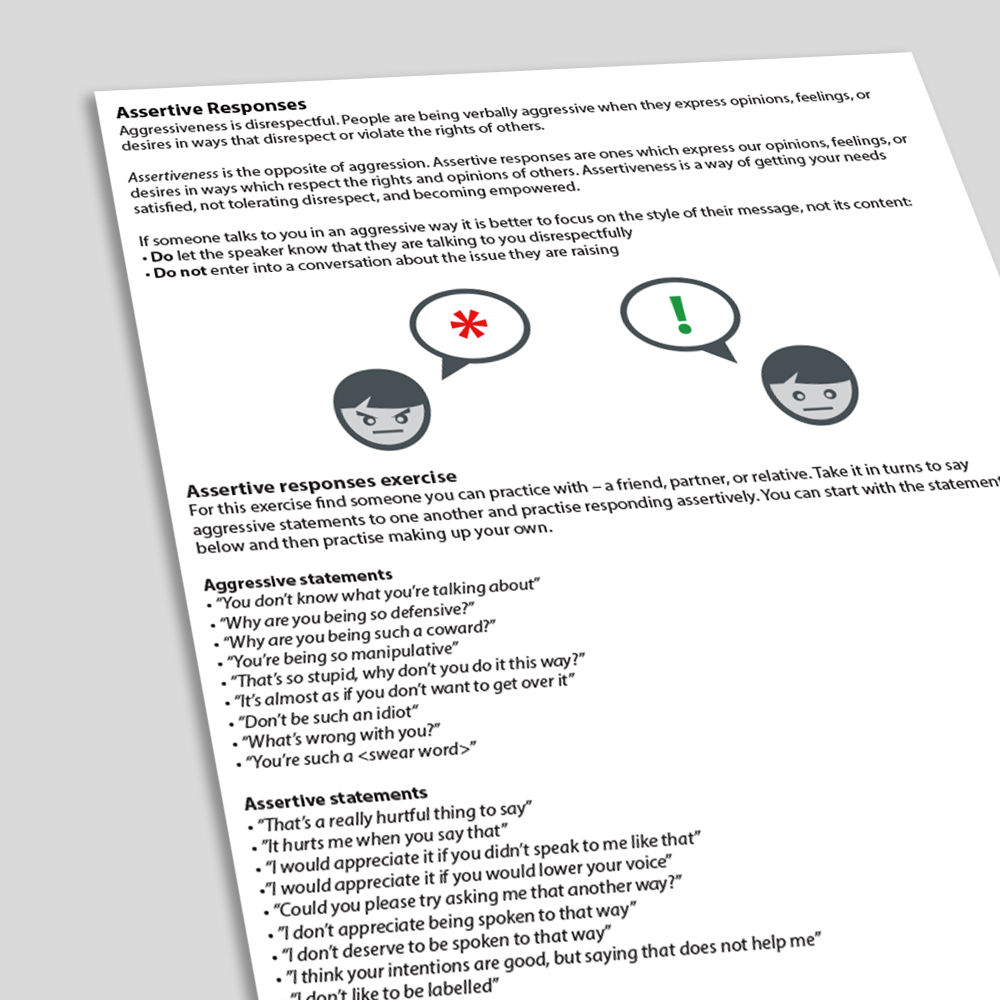 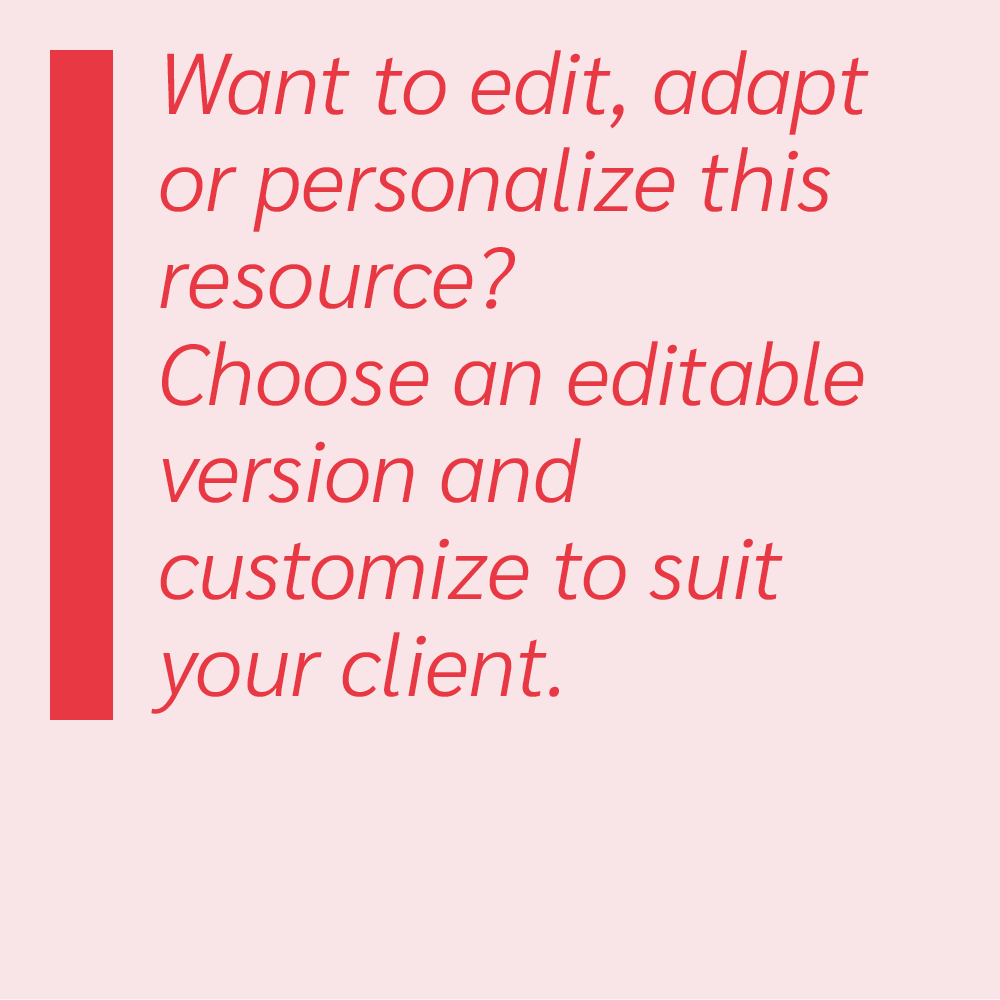 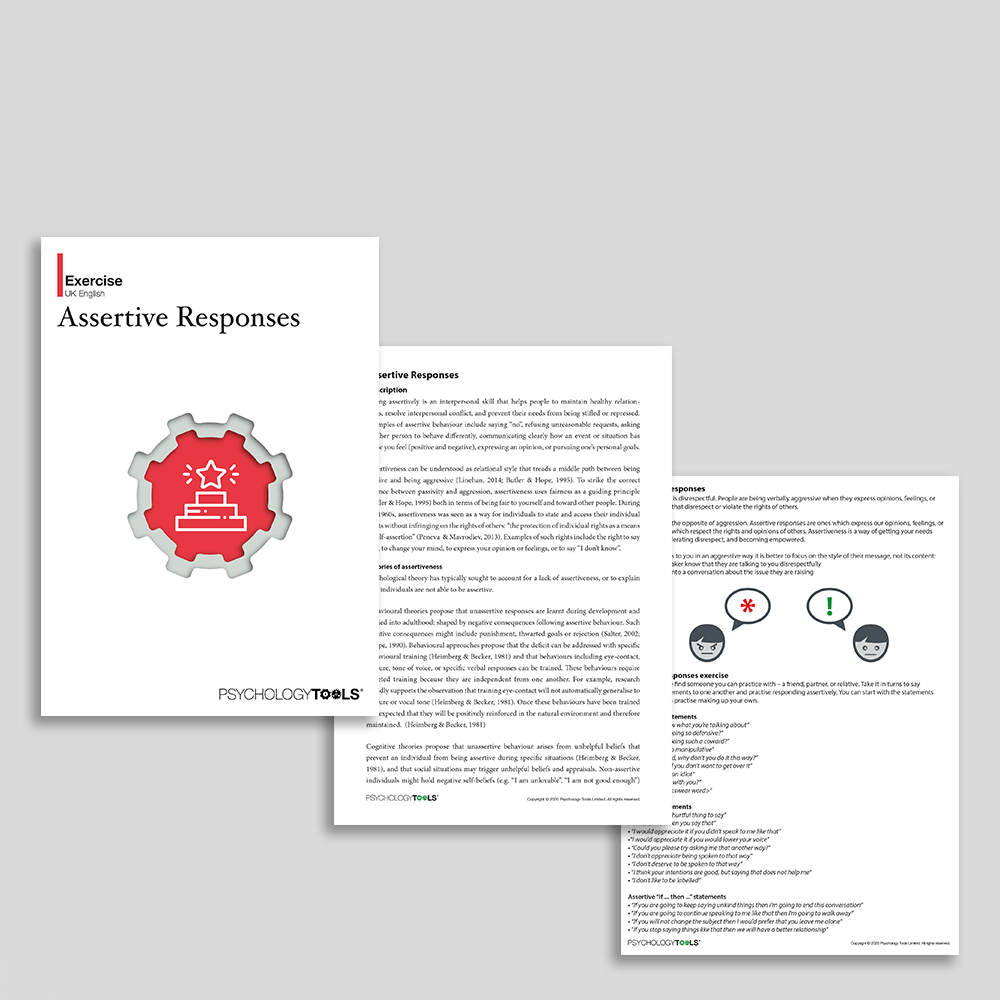 Acting assertively is an interpersonal skill that helps people to maintain healthy relationships, resolve interpersonal conflict, and prevent their needs from being stifled or repressed. Examples of assertive behavior include saying “no”, refusing unreasonable requests, asking another person to behave differently, communicating clearly how an event or situation has made you feel (positive and negative), expressing an opinion, or pursuing one’s personal goals.

Assertiveness can be understood as relational style that treads a middle path between being passive and being aggressive (Linehan, 2014; Butler & Hope, 1995). To strike the correct balance between passivity and aggression, assertiveness uses fairness as a guiding principle (Butler & Hope, 1995) both in terms of being fair to yourself and toward other people. During the 1960s, assertiveness was seen as a way for individuals to state and access their individual rights without infringing on the rights of others: “the protection of individual rights as a means of self-assertion” (Peneva & Mavrodiev, 2013). Examples of such rights include the right to say “no”, to change your mind, to express your opinion or feelings, or to say “I don’t know”.

Psychological theory has typically sought to account for a lack of assertiveness, or to explain why individuals are not able to be assertive.

Behavioral theories propose that unassertive responses are learnt during development and carried into adulthood: shaped by negative consequences following assertive behavior. Such negative consequences might include punishment, thwarted goals or rejection (Salter, 2002; Wolpe, 1990). Behavioral approaches propose that the deficit can be addressed with specific behavioral training (Heimberg & Becker, 1981) and that behaviors including eye-contact, posture, tone of voice, or specific verbal responses can be trained. These behaviors require targeted training because they are independent from one another. For example, research broadly supports the observation that training eye-contact will not automatically generalize to posture or vocal tone (Heimberg & Becker, 1981). Once these behaviors have been trained it is expected that they will be positively reinforced in the natural environment and therefore maintained (Heimberg & Becker, 1981).

Cognitive theories propose that unassertive behavior arises from unhelpful beliefs that prevent an individual from being assertive during specific situations (Heimberg & Becker, 1981), and that social situations may trigger unhelpful beliefs and appraisals. Non-assertive individuals might hold negative self-beliefs (e.g. “I am unlovable”, “I am not good enough”) and dysfunctional assumptions (e.g. “If I say no I won’t be liked”, “If I say what I want then I’ll be punished”). Such beliefs affect how the individual appraises situations, leading to negative automatic thoughts such as “They’re going to leave” or “He’s angry with me”, which would result in feelings of anxiety, uncertainty in how to act, and the inhibition of assertive responses.

Assertiveness training has a long history as a transdiagnostic psychological intervention. It can be highly useful during clinical work, due to the relationship between assertiveness (or unassertiveness) and self-esteem, social relationships and achieving personal goals across a wide spectrum of clinical presentations.

“The skills taught are intended to maximize the chances that a person’s goals in a specific situation will be met, while at the same time not damaging either the relationship or the person’s self-respect” Speed, Goldstein & Goldfried (2017)

Interventions can take the form of social skills training that directly modifies assertive behaviors. Therapist modelling and rehearsal of passive and aggressive behaviors can help to consolidate what a balanced, assertive response should look like. Behavioral rehearsal during roleplays can be audio and video recorded, in order to provide direct feedback.

Specific physical behaviors can be targeted (Linehan, Goldfried & Goldfried, 1979). Assertive non-verbal communication includes adopting an upright and confident posture, a clear and calm tone of voice, and use of direct eye contact especially when requesting or refusing. Adopting these behaviors makes a clear demonstration that a person is not submissive. The use of specific verbal responses can also be trained, such as “I” statements (Salter, 2002), saying “no” (Linehan, 2014) and not apologizing unnecessarily. When using assertive verbal communication, an individual is able to describe the current situation, express what they need and want, explicitly consider the other person’s perspective, re-assert their own goals and consider mutually agreeable compromises that may lead to a resolution. To complement this, active listening behaviors prevent the relational style from becoming aggressive. At a minimum, active listening combines feedback to show that the other person is being heard (head nodding, minimal verbalizations such as “mm hmm” and “yep”) as well as summarizing and reflecting back what the other person has said without passing judgement (“so you feel that…”, “you explained that….”, “you told me…”).

Cognitive restructuring approaches address underlying distorted cognitions (e.g. social anxiety, low self-esteem, high self-criticism) and the negative beliefs an individual may hold about asserting themselves (Speed, Goldstein & Goldfried, 2018). Thought monitoring and recording can be used to uncover the underlying cognitions and ‘hot thoughts’ that are triggered by problematic social interactions. Behavioral and cognitive approaches can be combined, using behavioral skill training that employs rehearsal and role-play as exposure therapy to test underlying cognitions (e.g. avoidance of social situations and worry about the social consequences of being assertive).

When to use assertiveness training

Individuals experiencing emotional difficulties often struggle to act assertively, and low levels of assertive behavior may reinforce such problems. People who experience anxiety may be submissive during social interactions, perhaps fearing the consequences of trying to express their needs or pursue personal goals. An unintended consequence of such behavior can be the suppression or minimization of their own needs. Being unable to act in one’s own self-interest has an impact on social situations and relationships (Peneva & Mavrodiev, 2013). Low levels of assertiveness are associated with low relationship satisfaction and low self-esteem (Speed, Goldstein & Goldfried, 2018). An individual may express that they cannot interact in a satisfactory way with other people, and that they avoid social situations. They may struggle to begin and maintain fulfilling relationships, and report a pattern of problematic or damaging interactions with other people.

Social anxiety can also be associated with anger, aggression and hostility. The individual may report frustration at not being able to get their needs met, a buildup of resentment against the other person, and explosive outbursts or arguments. Adopting an assertive communication style can help to reduce aggression in social situations. It has been shown to improve self-esteem, internal locus of control and to decrease hostility (Speed, Goldstein & Goldfried, 2018).

Being able to communicate assertively is an essential skill for developing and maintaining healthy relationships and positive self-esteem. Individuals with anxiety may find it particularly difficult to be assertive when interacting with people who are dominant or aggressive. A key skill is to be able to respond to the style of an aggressor’s message, not its content. This Assertive Responses exercise worksheet guides clients through the practice of responding assertively to aggressive statements.

A critical skill in responding assertively is to avoid being drawn into responding to an aggressor’s argument. An assertive response draws a boundary which says “I will not tolerate being spoken to in that way”.

Assertiveness training requires the rehearsal and role-play of social interactions. In this exercise the therapist and client (or client and friend) practice in a pair. The therapist or friend says one of the aggressive statements, the client then responds with an assertive statement.

“You are going to practice responding assertively to someone who is being aggressive towards you. The exercise sheet here has a list of unpleasant and aggressive things that people might say to you, or have said to you in the past. I am going to pretend to be aggressive and say one of these. You should then choose one of the assertive responses as a reply.”