The CBT Thought Record is an essential tool in cognitive behavioral therapy. Thought challenging records help people to evaluate their negative automatic thoughts for accuracy and bias. This CBT Thought Record is in portrait orientation which some clients find makes it easier to conceptualize the ‘evidence for’ and ‘evidence against’ components. 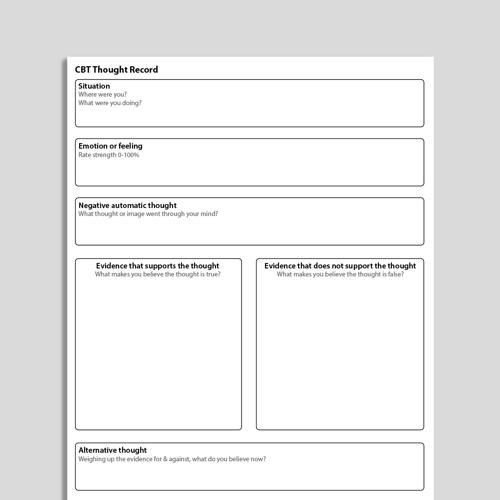 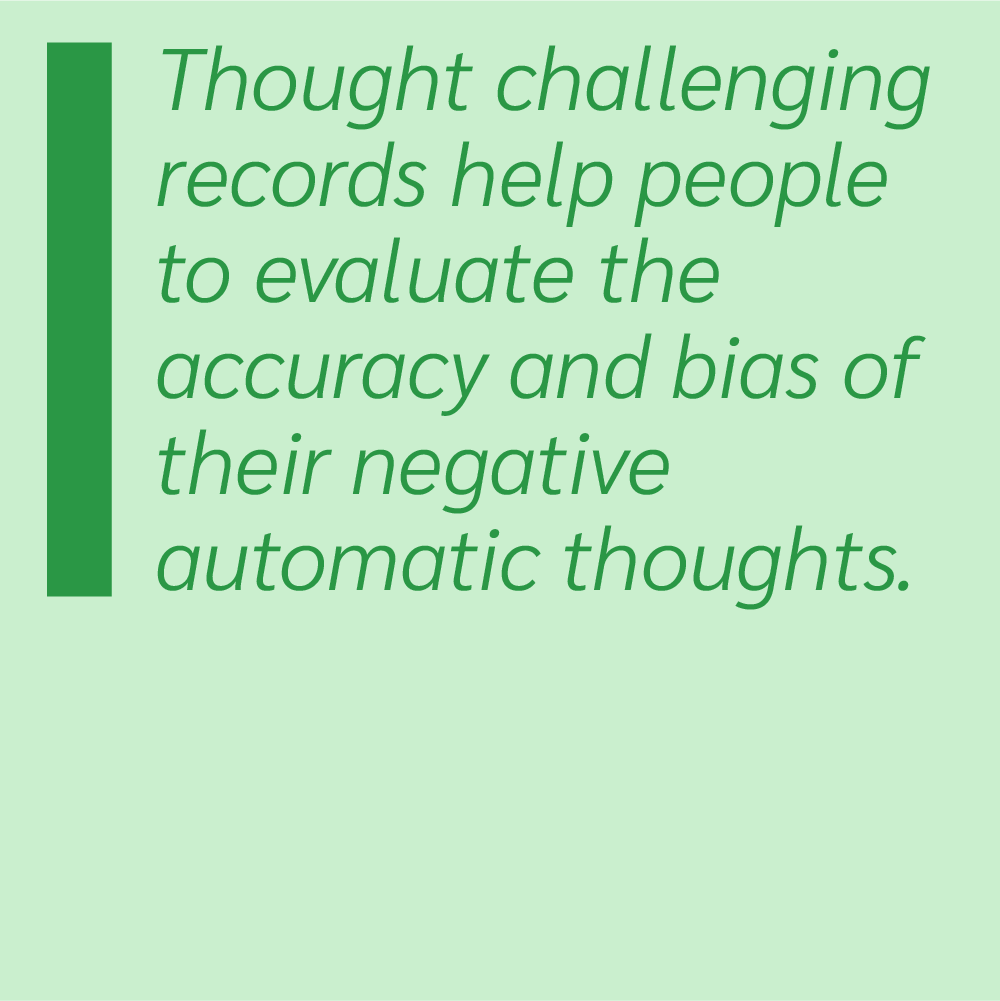 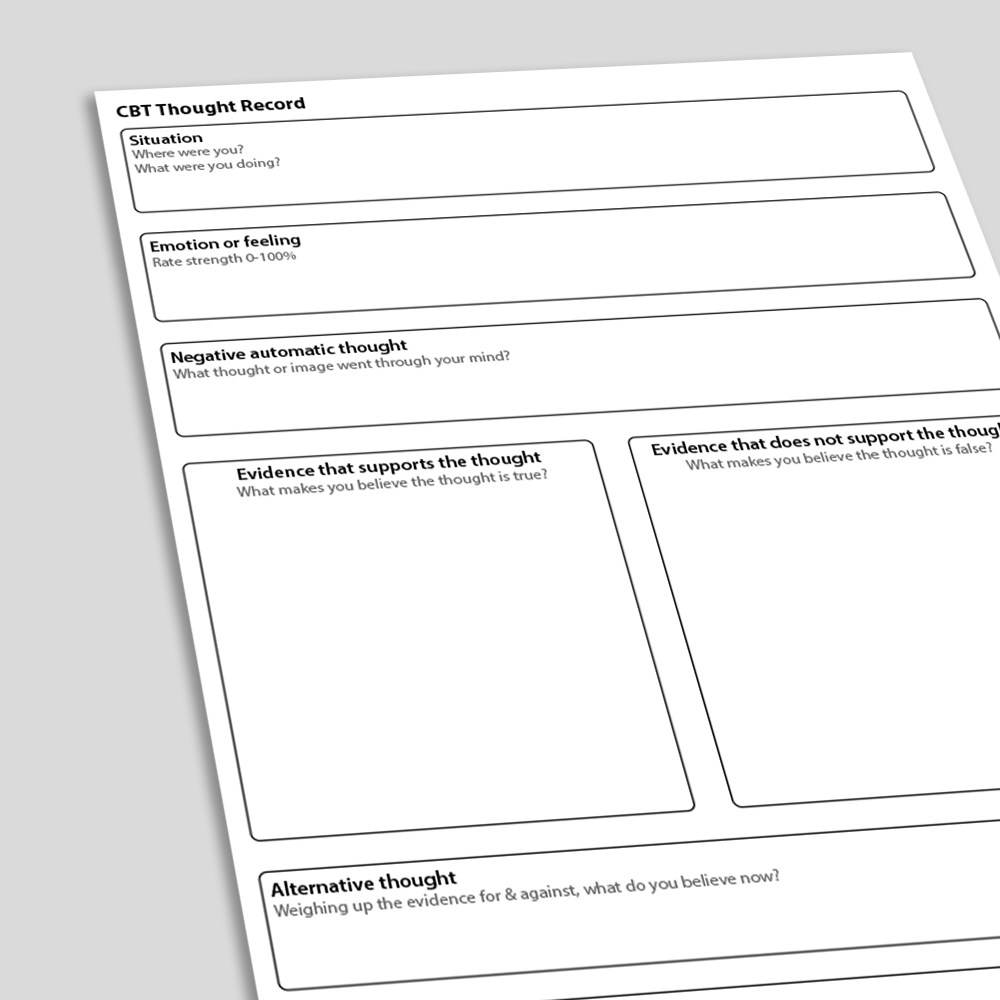 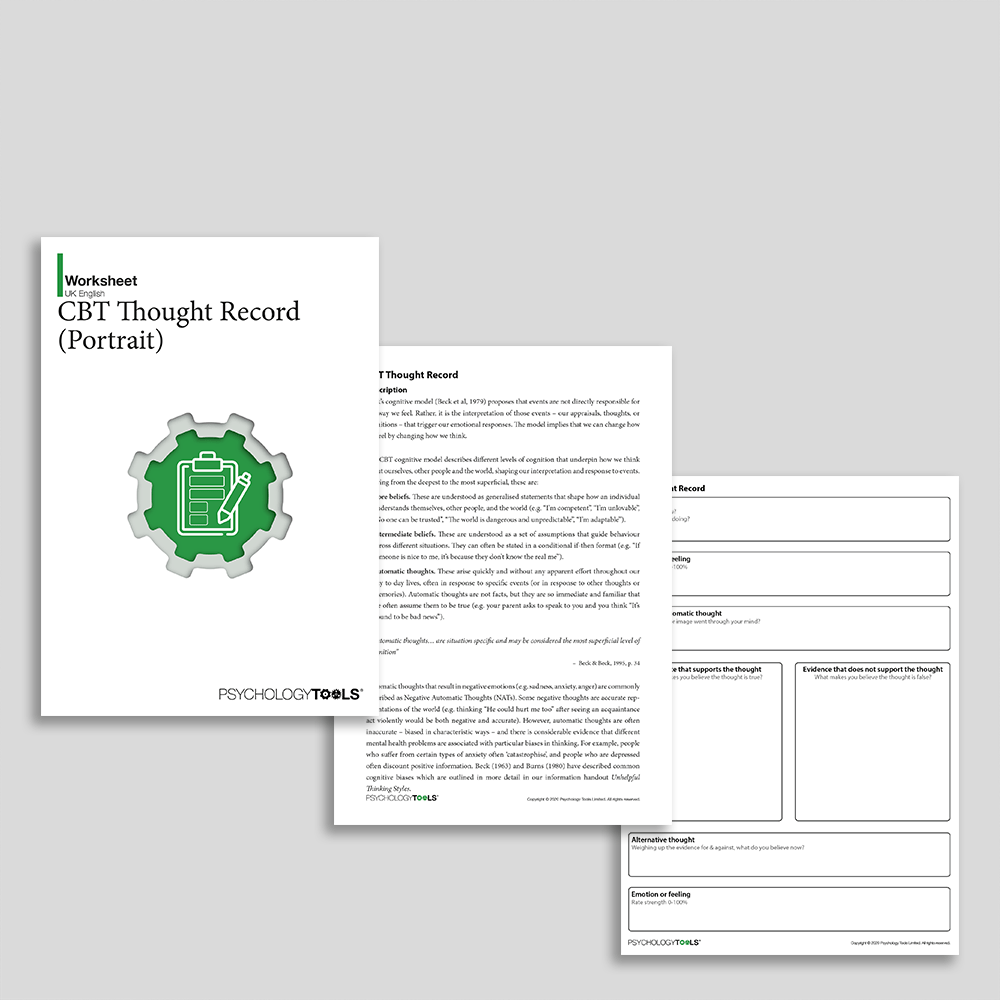 Beck’s cognitive model (Beck et al, 1979) proposes that events are not directly responsible for the way we feel. Rather, it is the interpretation of those events – our appraisals, thoughts, or cogni- tions – that trigger our emotional responses. The model implies that we can change how we feel by changing how we think.

Automatic thoughts that result in negative emotions (e.g. sadness, anxiety, anger) are commonly described as Negative Automatic Thoughts (NATs). Some negative thoughts are accurate rep- resentations of the world (e.g. thinking “He could hurt me too” after seeing an acquaintance act violently would be both negative and accurate). However, automatic thoughts are often inaccurate – biased in characteristic ways – and there is considerable evidence that different mental health problems are associated with particular biases in thinking. For example, people who suffer from certain types of anxiety often ‘catastrophize’, and people who are depressed often discount positive information. Beck (1963) and Burns (1980) have described common cognitive biases which are outlined in more detail in our information handout Unhelpful Thinking Styles.

The CBT Thought Record (Portrait Orientation) is a cognitive restructuring worksheet. ‘Cognitive restructuring’ describes the category of techniques that cognitive therapists use to help their clients to overcome their cognitive biases and think differently. The aim of these techniques is not to ‘think happy thoughts’ or to replace negative thoughts with positive ones, rather, it is to overcome biases and think accurately. CBT therapists use a variety of techniques to help their clients to develop cognitive restructuring skills, but a mainstay is the ‘thought record’. Thought records exist in multiple variants, depending on the needs and abilities of the client.

This seven-column CBT thought record can be used to:

“The way CBT works is that what we think affects the way we feel. Everyone has hundreds of ‘automatic thoughts’ every day. These are thoughts that just ‘pop’ into your mind. Sometimes the thoughts that we have are facts, but other times they are opinions: sometimes they are accurate and helpful, and sometimes they are inaccurate and unhelpful. People often mistake CBT as being about ‘thinking happy thoughts’ but actually it’s about thinking accurate thoughts. A good way of catching and examining your negative automatic thoughts is to use a thought record. Would you be willing to practice one with me now?”