Fair fighting is a collection of rules that individuals can use to manage conflict effectively, so that it is ‘fair’ and works towards a resolution. Fair fighting rules allow people to proactively express their needs, manage strong emotions, and work collaboratively with the other person to problem solve and find solutions. The rules prevent interactions from being unhelpful, destructive or violent, and allow people within relationships to break cycles of damaging and unresolved arguments. Fair fighting rules are often taught together with a combination of communication, negotiation and problem solving skills. Fair fighting has its origins in couples’ psychotherapy, and a variety of versions of this technique are commonly used in couples therapy today. It can also be used with individuals to detect patterns in their own and other people’s behavior, and to manage relationships more constructively. 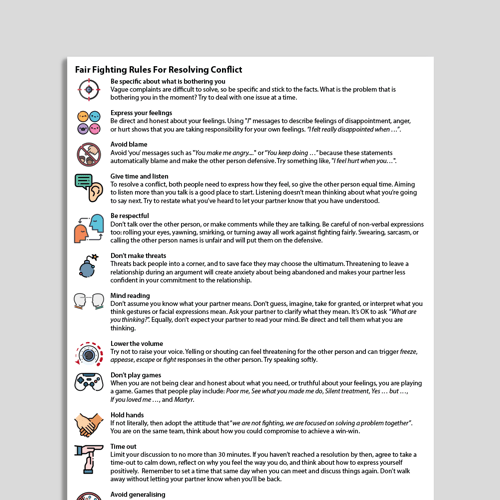 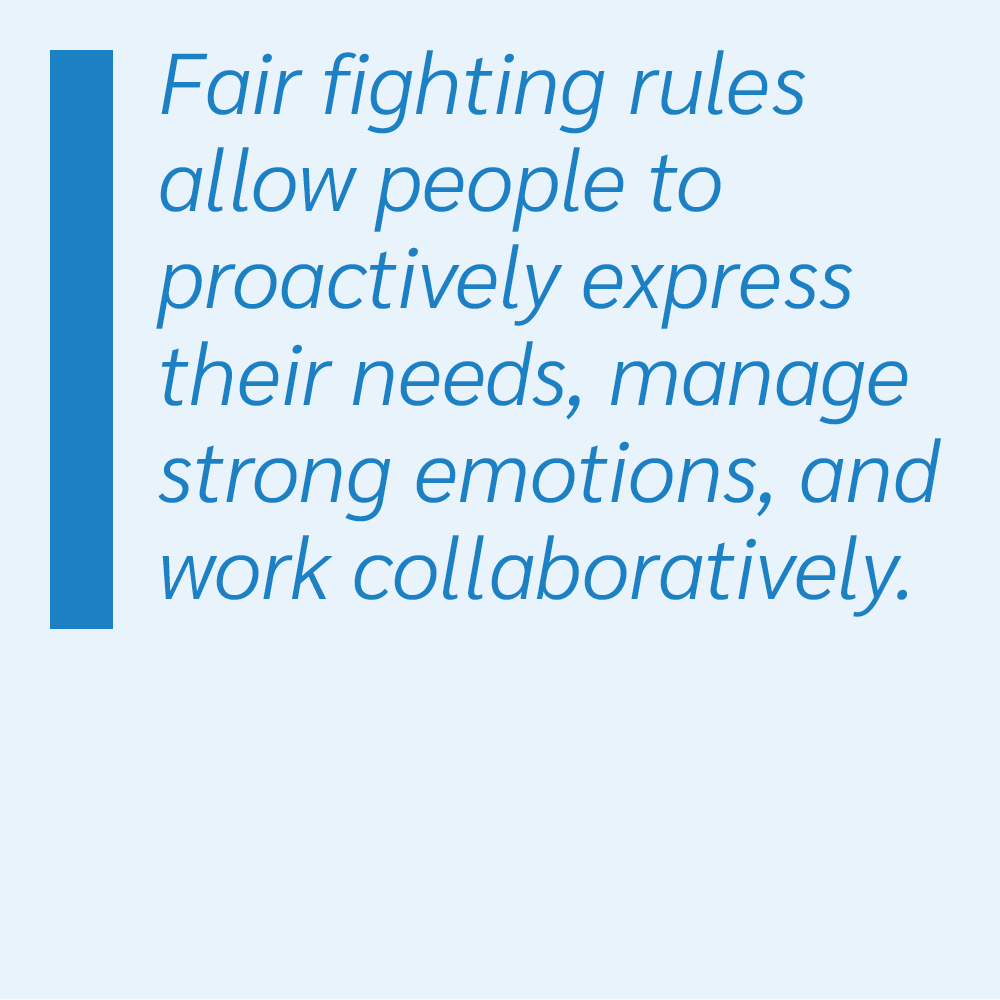 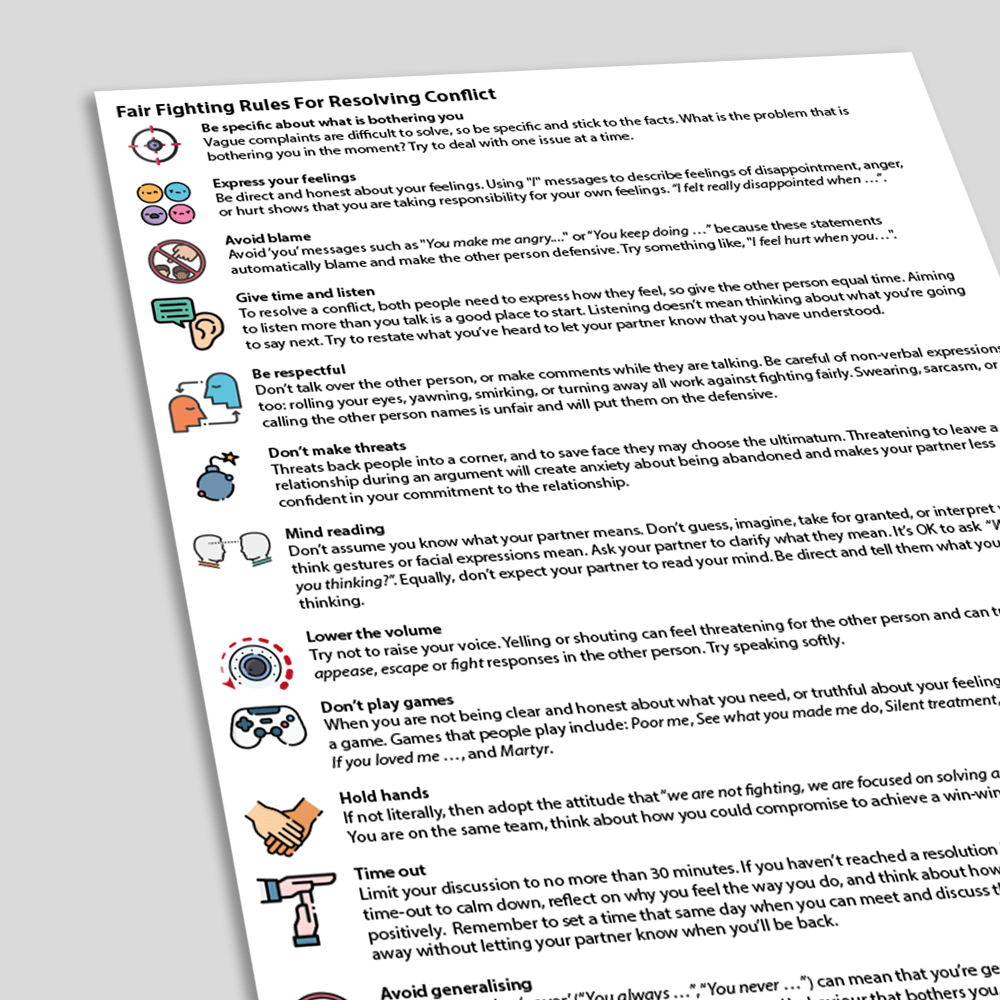 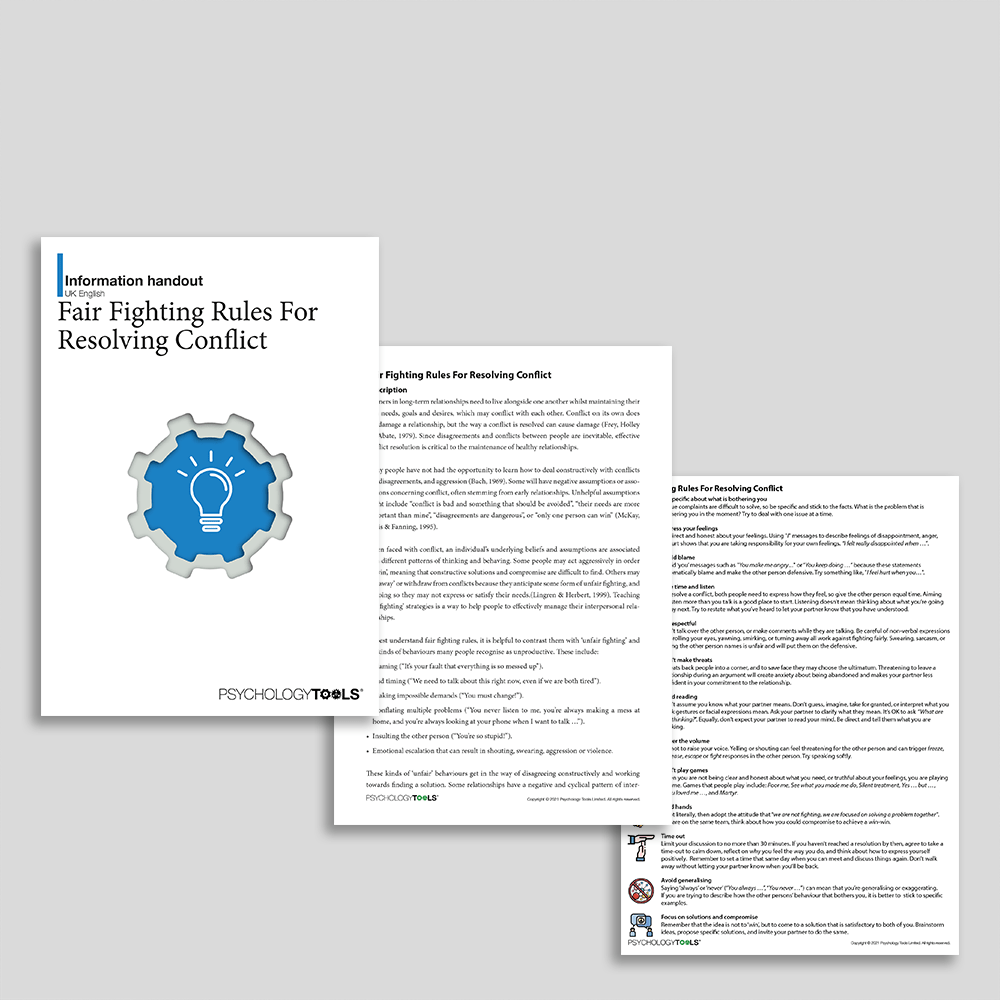 Partners in long-term relationships need to live alongside one another whilst maintaining their own needs, goals and desires, which may conflict with each other. Conflict on its own does not damage a relationship, but the way a conflict is resolved can cause damage (Frey, Holley & L’Abate, 1979). Since disagreements and conflicts between people are inevitable, effective conflict resolution is critical to the maintenance of healthy relationships.

Many people have not had the opportunity to learn how to deal constructively with conflicts, disagreements and aggression (Bach, 1969). Some will have negative assumptions or associations concerning conflict, often stemming from early relationships. Unhelpful assumptions might include “conflict is bad and something that should be avoided”, “their needs are more important than mine”, “disagreements are dangerous”, or “only one person can win” (McKay, Davis & Fanning, 1995).

When faced with conflict, an individual’s underlying beliefs and assumptions are associated with different patterns of thinking and behaving. Some people may act aggressively in order to ‘win’, meaning that constructive solutions and compromises are difficult to find. Others may ‘shy away’ or withdraw from conflicts because they anticipate some form of unfair fighting, and in doing so they may not express or satisfy their needs.(Lingren & Herbert, 1999). Teaching ‘fair fighting’ strategies is a way to help people to effectively manage their interpersonal relationships.

To best understand fair fighting rules, it is helpful to contrast them with ‘unfair fighting’ and the kinds of behaviors many people recognize as unproductive. These include:

These kinds of ‘unfair’ behaviors get in the way of disagreeing constructively and working towards finding a solution. Some relationships have a negative and cyclical pattern of interaction each time a conflict arises, as disagreements are left unresolved and more emotional distance is created. Over time, this can lead to the partial or total breakdown of a relationship (Bach, 1969; Lingren, 1999; Nielsen, 2017).

“Teaching… couples how to talk more safely will often enable them to access deeper concerns later in therapy.” (Nielsen, 2017)

Fair fighting is based upon three principles (McKay, Davis & Fanning, 1995):

Fair fighting helps to improve and facilitate communication between people. It views conflict as healthy, necessary and an opportunity to increase intimacy between the people who disagree (Bach, 1969; Frey, Holley & L’Abate, 1979; Lingren, 1999). It encompasses different skills, laid down as ground rules that all parties should agree and adhere to when dealing with conflict:

This Fair Fighting Rules For Resolving Conflict information handout is designed to help your client assess their relationships and their patterns of dealing with conflict. It can also be used as part of a skills development exercise to help couples fight more effectively.

If you are using fair fighting rules in the context of psychoeducation:

We talked earlier about how you find it distressing when you have an argument with <person>. Disagreements occur in all relationships; the important thing is to disagree well, and to find solutions together without getting side-tracked by unhelpful ways of acting. One way to do this is to have both partners agree to use Fair Fighting Rules. Would you be willing to look at some of these rules with me?

If you are using fair fighting rules to assess the qualities of past disagreements:

Disagreements between people are unavoidable, but they don’t have to be a bad thing. Conflicts can help people work together and solve problems together, and when people can resolve arguments positively and find solutions, their relationships are stronger. I want to introduce you to some Fair Fighting Rules so that we start thinking about HOW arguments can be fair or unfair…

Read through the rules together: