The Fear Ladder is a tool for exploring and ranking the contexts or situations in which a client experiences fear. It is designed to help the client and the therapist identify targets for exposure and monitor the progress made in confronting these fears. 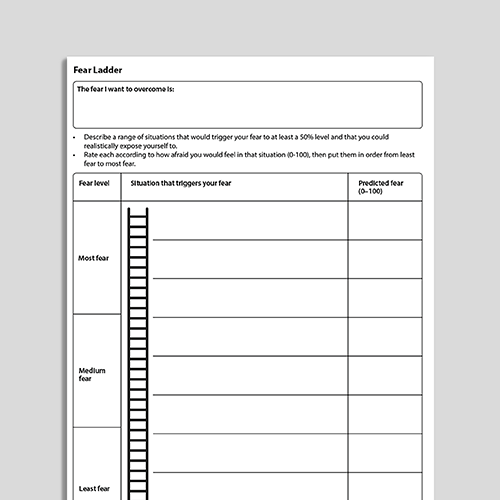 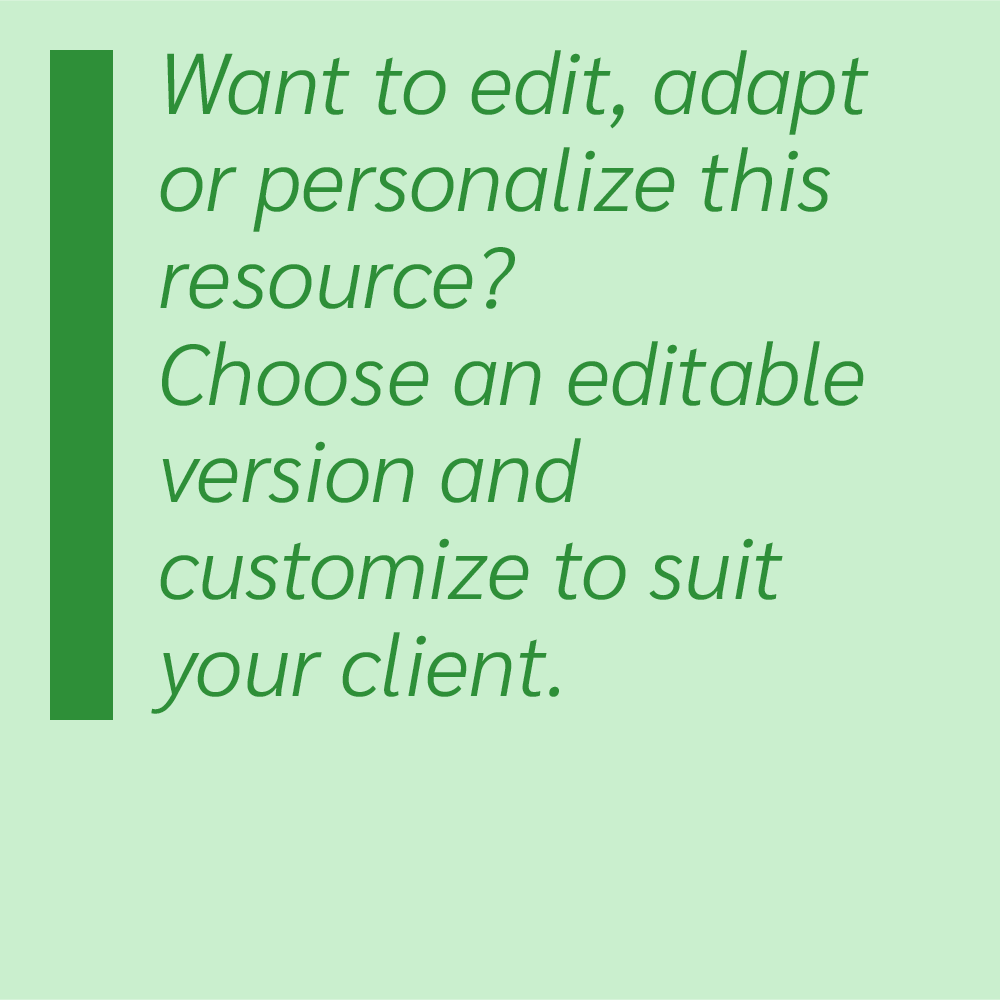 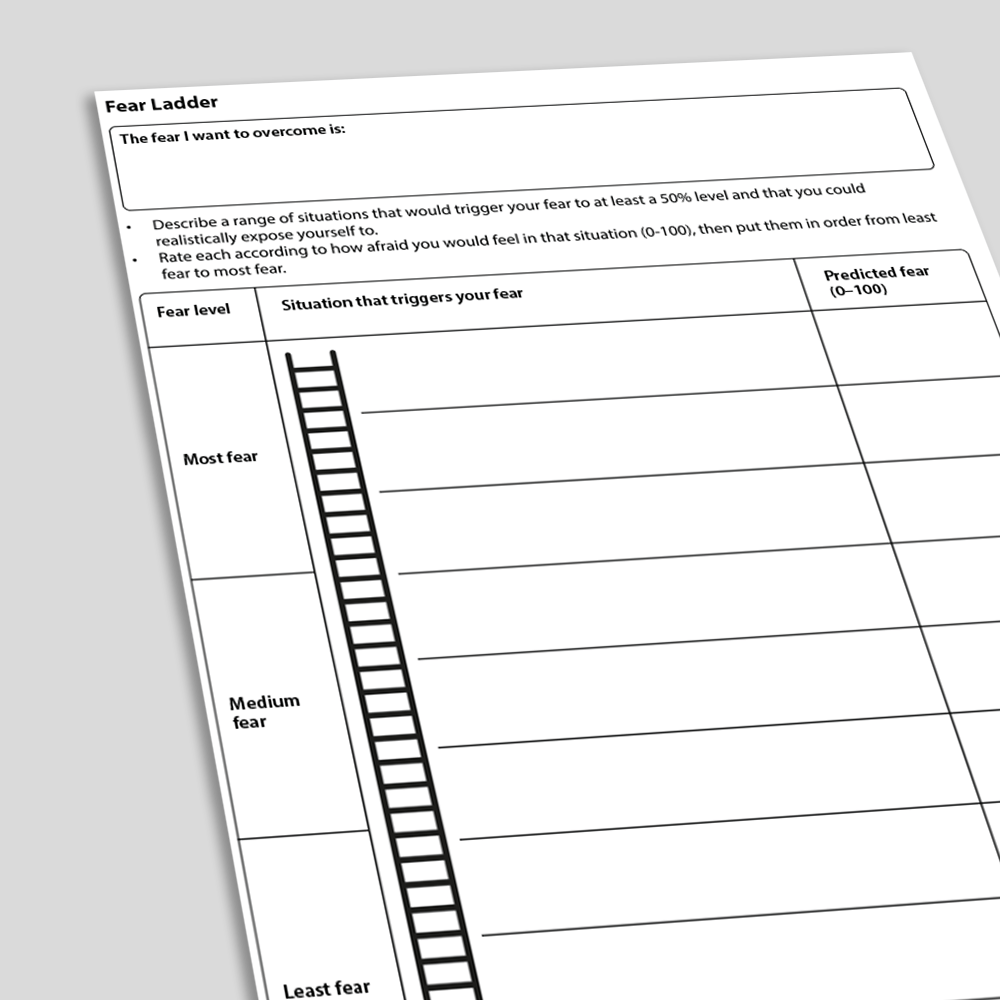 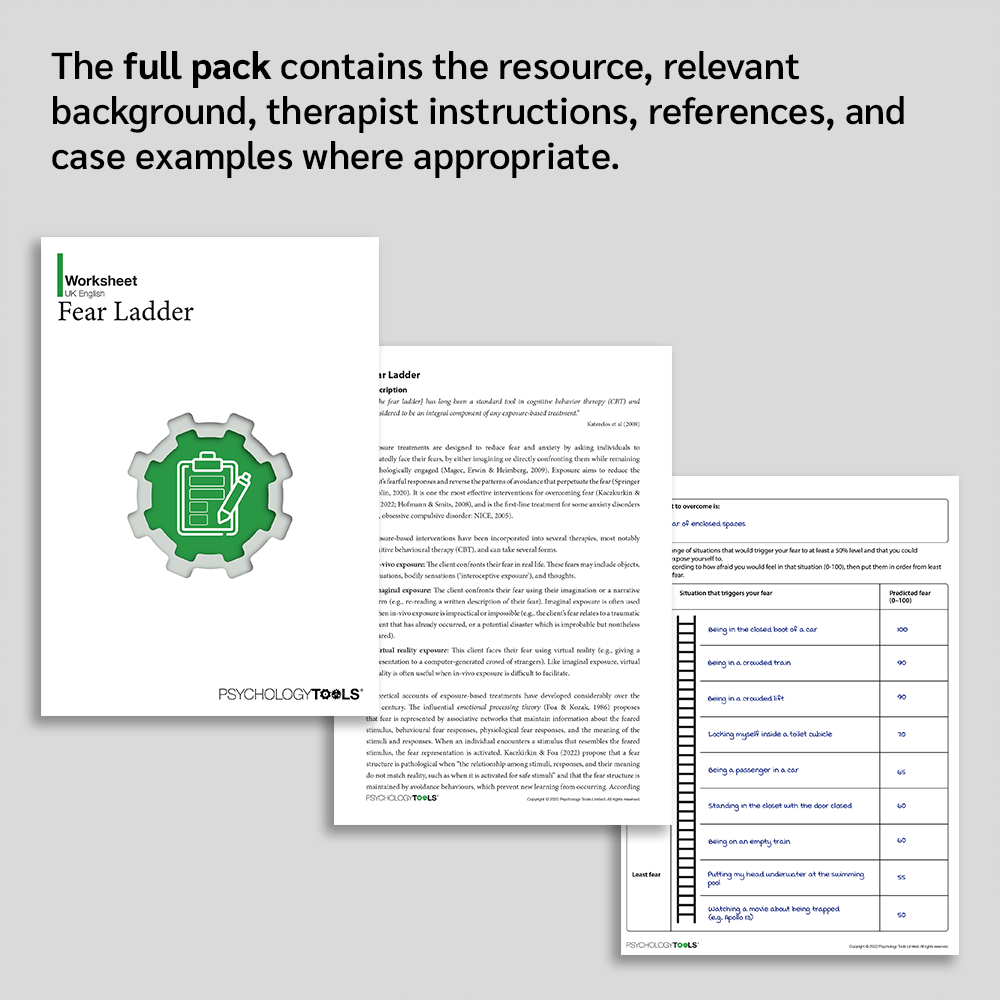 “[The fear ladder] has long been a standard tool in cognitive behavior therapy (CBT) and considered to be an integral component of any exposure-based treatment.”

Exposure treatments are designed to reduce fear and anxiety by asking individuals to repeatedly face their fears, by either imagining or directly confronting them while remaining psychologically engaged (Magee, Erwin & Heimberg, 2009). Exposure aims to reduce the client’s fearful responses and reverse the patterns of avoidance that perpetuate the fear (Springer & Tolin, 2020). It is one the most effective interventions for overcoming fear (Kaczkurkin & Foa, 2022; Hofmann & Smits, 2008), and is the first-line treatment for some anxiety disorders (e.g., obsessive compulsive disorder: NICE, 2005).

Exposure-based interventions have been incorporated into several therapies, most notably cognitive behavioral therapy (CBT), and can take several forms.

Theoretical accounts of exposure-based treatments have developed over the past century. The influential emotional processing theory (Foa & Kozak, 1986) proposes that fear is represented by associative networks that maintain information about the feared stimulus, behavioral fear responses, physiological fear responses, and the meaning of the stimuli and responses. When an individual encounters a stimulus that resembles the feared stimulus, the fear representation is activated. Kaczkirkin & Foa (2022) propose that a fear structure is pathological when “the relationship among stimuli, responses, and their meaning do not match reality, such as when it is activated for safe stimuli” and that the fear structure is maintained by avoidance behaviors, which prevent new learning from occurring. According to the emotional processing theory account, exposure modifies the pathological fear structure by first activating it, and then providing new information that disconfirms inaccurate or pathological associations in the fear structure. Emotional processing theory suggests that within-session habituation leads to between-session habituation, and subsequently longer-term change, although more recent research suggests that habituation is not a strong predictor of treatment effectiveness.

An alternative account of exposure therapy is provided by inhibitory learning theory (ILT: Craske et al, 2008; Tolin, 2019). ILT proposes that the threat association learned during fear acquisition is not erased, replaced, or modified by new learning during exposure. Instead, the fear-inducing stimulus becomes ambiguous, with two meanings that both live in memory and compete for retrieval. Craske describes how a client might “enter therapy with a threat expectancy, such as ‘If I panic, I might die’ or ‘If I am socially rejected, it would be unbearable’. As a result of exposure therapy, a competing non-threat expectancy develops, such as ‘If I panic, I am unlikely to die’ or ‘If I am socially rejected, I will survive’. After completion of exposure therapy, the level of fear that is experienced when the stimulus is re-encountered is dependent upon which expectancy is activated. Activation of the original threat expectancy will enhance the expression of fear, whereas activation of the exposure-based non-threat expectancy will lessen fear expression.” Inhibitory learning theory helps to explain why fear can return easily, even in people who have successfully completed treatment, and why habituation does not seem to be important for exposure therapy to be effective.

While the mechanisms of action underlying exposure are debatable (e.g., emotional processing versus inhibitory accounts of exposure), the stages of exposure as it is currently practiced are relatively consistent:
Stage 1: The client identifies a fear stimulus they are willing to confront.
Stage 2: The client describes what they expect will happen when they face the stimulus.
Stage 3: The client exposes themselves to the stimulus for a prolonged period, without distraction.
Stage 4: Changes in the client’s fear levels are monitored throughout.
Stage 5: After exposure, the client and therapist reflect on what has been learnt (e.g., whether the stimulus is as dangerous as the client initially thought).
Stage 6: Exposure is repeated.

Exposure is usually preceded by the development of a fear ladder (sometimes referred to as an “exposure hierarchy”: Beck et al., 1985). Fear ladders are an idiographic list of stimuli (e.g.,activities, situations, or sensations) that generate fear for the client and are avoided. Once the list is generated, items are ranked and ordered according to the level of fear they generate. Fear ladders have many applications in therapy, including:

How clients ‘climb’ their fear ladder during exposure varies according to the theoretical framework informing its use. Traditionally, clients have been encouraged to face their fears in a graded manner, starting with lower items on their ladder (i.e., graded exposure therapy). Once anxiety has diminished (i.e., the client habituates to the stimulus), they move ‘up’ their ladder and face a more threatening item. Each step is repeated until habituation occurs (Knowles & Olatunji, 2019). Beck and colleagues (1985) suggest that these “successive approximations to a goal” (p.265) are helpful because they break difficulties down into manageable steps and prevent clients from moving ahead too quickly (which may backfire). Other rationales for graded exposure include increasing client buy-in, the motivating effects of successfully confronting less threatening stimuli, and maximizing habituation and emotional processing during exposure (Foa & Kozak, 1986; Watts, 1971).

More recently, inhibitory learning models have emphasized the importance of variability during exposure (Craske, 2015). For example, clients might be encouraged to face different types of feared stimuli in various contexts (e.g., in the therapist’s office, at home, etc.). Regarding the fear ladder, variability would entail exposing the client to items in a random order rather than working up the list in a graded, predictable manner. Inhibitory learning suggests that variability helps maximize learning during exposure, increases clients’ fear tolerance, and strengthens new associations between the feared object and the non-occurrence of negative outcomes (i.e., safety learning) (Knowles & Olatunji, 2019). Research indicates that variable exposure may have an advantage over non-variable (i.e., graded) approaches to exposure (e.g., Kircanski et al., 2012). However, Craske (2015) recommends that exposure should still begin with clients’ least feared items, to minimize the risk of treatment refusal.

“We’ve talked about how exposure can help people overcome their fears and what it involves. I’m glad you’re willing to try it for yourself. Before we use it, I’d like to show you a Fear Ladder. A Fear Ladder is a list of things that scare you, and which you’d normally prefer to avoid. We can use this list to guide what you’ll need to expose yourself to at which time, so that you can overcome your fear. Can we look at it together?”