Developing self-monitoring skills teaches clients to systematically observe and record specific targets such as their own thoughts, body feelings, emotions, and behaviors. Though it’s usually introduced early in the therapy process, it can continue to provide an inexpensive and constant measure of problem symptoms and behaviors throughout treatment. The Rumination – Self-Monitoring Record worksheet is designed to help clients capture information about situations where they engaged in rumination. 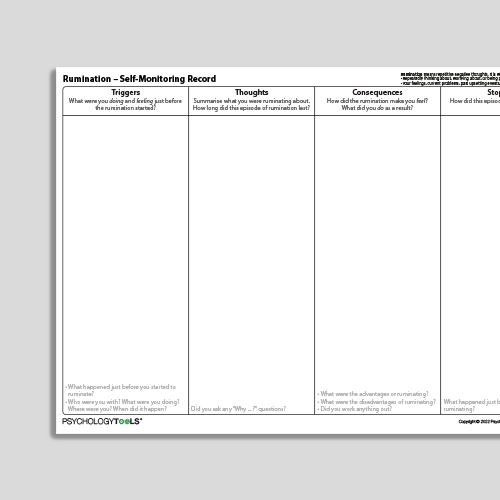 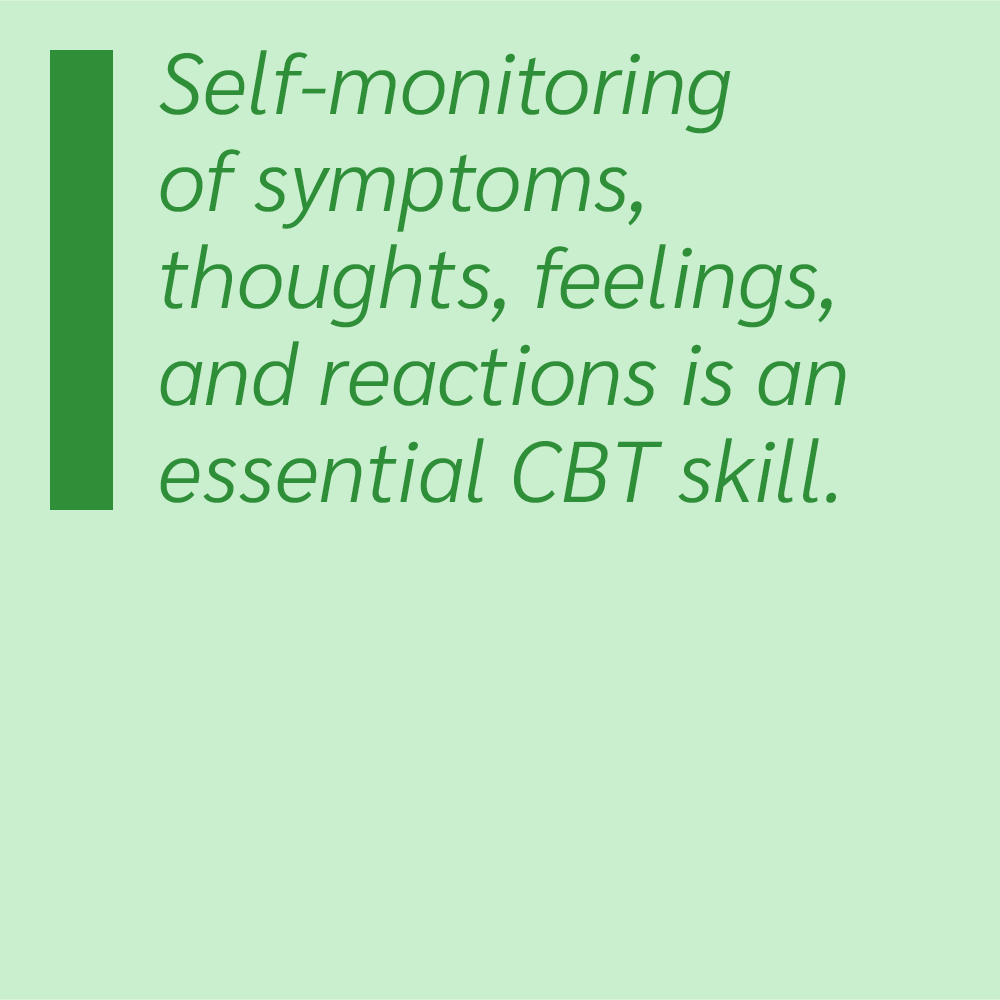 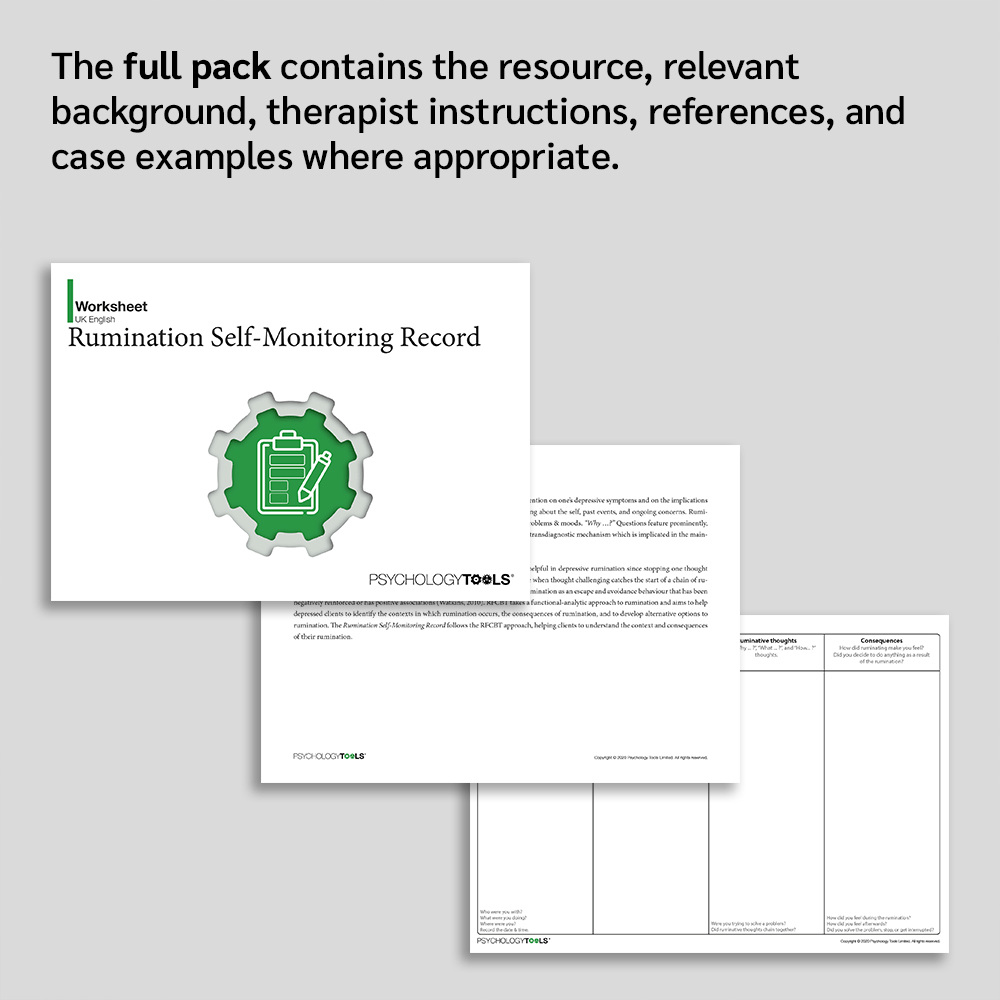 Self-monitoring is a technique in which clients learn to systematically observe and record specific targets such as their own thoughts, body feelings, emotions, and behaviors. The aim is to improve clients’ awareness of their experiences and the contexts in which they occur, in order to help them gain insight into their symptoms and difficulties. Self-monitoring supports collaboration between the therapist and client, and creates opportunities to formulate and test hypotheses about these difficulties. Self-monitoring is usually introduced early in therapy, and provides an inexpensive and continuous measure of problem symptoms and behaviors throughout treatment.

Psychology Tools self-monitoring records have been carefully designed to focus on particular targets. In most instances, there are:

Discrimination consists of identifying and noticing the target phenomena. This can be challenging for clients. It may be the first time that they have brought attention and awareness to their symptoms, thoughts and emotions, and some clients express concern about ‘doing it right’. Therapists can simplify the exercise by asking the client to record only whether the targets are present or absent, or by varying the questions they use to probe these thoughts and feelings. For example, instead of focusing on more difficult-to-capture thoughts and mental images, clients might be instructed to monitor more salient body sensations or behaviors (Kennerley, Kirk & Westbrook, 2017).

Recording is the process of documenting occurrences, usually through some kind of written record. Using a record allows clients to self-monitor: to discriminate the target (e.g., a feeling of anxiety), record it (e.g., when it occurred, how long it lasted, where they were and what they were doing), and review it (e.g., how often did it happen in a week, what was common across different episodes).

Self-monitoring can be accomplished using many different tools:

In practice, much of this terminology is interchangeable. For the purposes of this and other Psychology Tools resources, the term ‘Self-Monitoring Record’ will be used.

Why practice self-monitoring?
Clients are encouraged to actively participate in cognitive-behavioral treatment, so that they will develop the skills and knowledge to help them to address their difficulties. Introducing clients to self-monitoring is a straightforward way to begin this process.

Self-monitoring supports client engagement and motivation by fostering a sense of self-control and autonomy (Bornstein, Hamilton & Bornstein, 1986; Proudfoot & Nicholas, 2010). It helps clients to understand how and why these difficulties developed, and how they are maintained. This lays the foundation for intervention. Self-monitoring records can also be invaluable in helping therapists and clients identify controlling or influential contextual factors, which may not be immediately apparent during therapy sessions, or in the therapy room (Korotitsch & Nelson-Gray, 1999).

When should self-monitoring be practiced?
Self-monitoring is often taught early, during the assessment stage of therapy. It can be particularly useful when the target phenomenon is covert and cannot be observed by anyone but the clients themselves (Cohen et al, 2013). Examples of covert targets include rumination, self-criticism, or self-harm.

Early in therapy, clients may be asked to complete simple self-monitoring tasks, such as noting the frequency of particular behaviors or emotions. This can then develop into more sophisticated records that explore the triggers, thoughts, and consequences linked to specific events. As the intervention progresses, self-monitoring can be used to track adherence (e.g. how often a client uses a new strategy or adaptive coping technique) and the effectiveness of an intervention (e.g. how often the client now experiences problem symptoms, or implements new responses).

“Formal monitoring is distinct from casual observation. It requires a commitment on the part of the therapist and the patient to think through what monitoring is needed and to consistently assess a variable or variables, collect the data, and use the data to inform the formulation and treatment plan” (Persons, 2008, p.183)

Effective training uses clear and simple instructions that can be easily revisited. It has been shown that the accuracy of self-monitoring decreases when individuals try to monitor more than one behavior, or complete concurrent tasks (Korotitsch & Nelson-Gray, 1999). Therefore, the therapist and client should identify a single, well-defined target for monitoring, model and practice completion of the record, and emphasize the importance of repeated practice (Korotitsch & Nelson-Gray, 1999).

Accuracy also improves when clients are aware that what they record will be compared with therapist observation or checked in some way (Korotitsch & Nelson-Gray, 1999). To support this, self-monitoring records should be reviewed in each session and the data should contribute to client-therapist collaboration, formulation and intervention planning.

If a client experiences repeated difficulty with completing self-monitoring, the therapist should consider the following (Korotitsch & Nelson-Gray, 1999):

Rumination-Focused Cognitive Behavioral Therapy (RFCBT) conceptualizes rumination as a habitual “escape and avoidance behavior that has been reinforced in the past by the removal of aversive experience, or because it has perceived or actual functions” (Watkins, 2016). It is typically maintained because it avoids short-term pain, although it can result in unintended negative consequences. An RFCBT approach analyzes the function of rumination rather than its content. It differs from a typical CBT cognitive restructuring approach by focusing on understanding the antecendents-rumination-consequences sequence and helping patients to find alternatives, rather than trying to break the chain by examining the accuracy of particular thoughts (Watkins, 2016). Consequently, self-monitoring for rumination follows a format more aligned to functional analysis, to allow for the identification of contingent environmental and behavioral factors that maintain rumination.

“To change a habit of rumination, you first have to be aware of when and why you are doing it, so that you can replace it with something different. A great way of finding out more about your experiences rumination is to use a Self-Monitoring Record. It’s a bit like a diary that lets you record when rumination happens, what triggers it, and any other important details which could help us understand more about how it works. Would you be willing to go through one with me now, and then record examples of when you ruminated during the next week?”

Step 1: Choosing a focus, purpose, and prompt for data collection

Self-monitoring records are best used to capture information about specific categories of event that are of interest to the client, or related to a presenting problem. The accuracy of self-monitoring decreases when individuals try to monitor for more than one target, so therapist and client should identify a single well-defined target (e.g. “Times when you notice you have been ruminating”, “Times when you notice yourself dwelling on your problems”, “Times when you are brooding on something”). Self-monitoring is most helpful when it is completed as soon after the target event as possible, while the clients’ memory of what happened is still clear. Consider asking:

Step 2: Triggers
RFCBT views rumination as a habitual behavior that has been reinforced in the past because it relieved distress or discomfort, or because it has real or perceived benefits. RFCBT takes a functional analytic approach to understand the function of the rumination. It traces the sequence of the context in which the rumination started (the antecedents or the triggers for the rumination) through to its consequences, in order to understand why rumination happened (its function). Accordingly, whenever the client uses the self-monitoring form to record an episode of rumination, they should be encouraged to record information about the situation which has given rise to that experience. Relevant contextual information might be factual (e.g. date, time, location), externally focused (e.g. things that they could see, hear, touch, smell, taste), or internally focused (e.g. thoughts, images, memories). Helpful questions to ask might include:

Step 3: Thoughts
The purpose of self-monitoring for people who struggle with rumination is not to collect thoughts whose accuracy can then be evaluated, but rather to understand the function of the rumination (e.g. an attempt to understand why certain things have happened, to ensure that I do not make mistakes). However, it is necessary and helpful to collect information about the sequence and contents of each episode of rumination in order to inform hypotheses about the function. It may be necessary to alternate between recording the client’s ruminative thoughts, their feelings (consequences), and actions (consequences). Helpful questions might include:

Step 4: Consequences
Rumination and avoidance are both normal when used in the right amounts and in the right circumstances. When used excessively, they can become problematic. Excessive use of rumination and avoidance can be the result of positive reinforcement, past learning, or a perceived benefit. Clients can be helped to explore the intended and unintended, as well as the short- and long-term consequences of their rumination. Therapists may use this information to make hypotheses regarding “how might this rumination have developed?” and “what might be the possible functions of this rumination?”. Consider asking:

Step 5: Stopping
The final step is to explore how that episode of rumination stopped. Prompts could include: