Starvation Syndrome – The Effects of Semi-Starvation

The Starvation Syndrome – Effects of Semi-Starvation handout provides an overview of the Minnesota Starvation Experiment and common symptoms of semi-starvation. It describes how disordered patterns of eating can cause to semi-starvation and the benefits of normalizing food intake through regular eating. 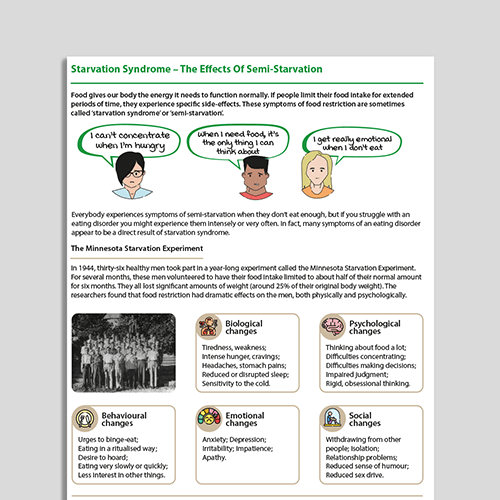 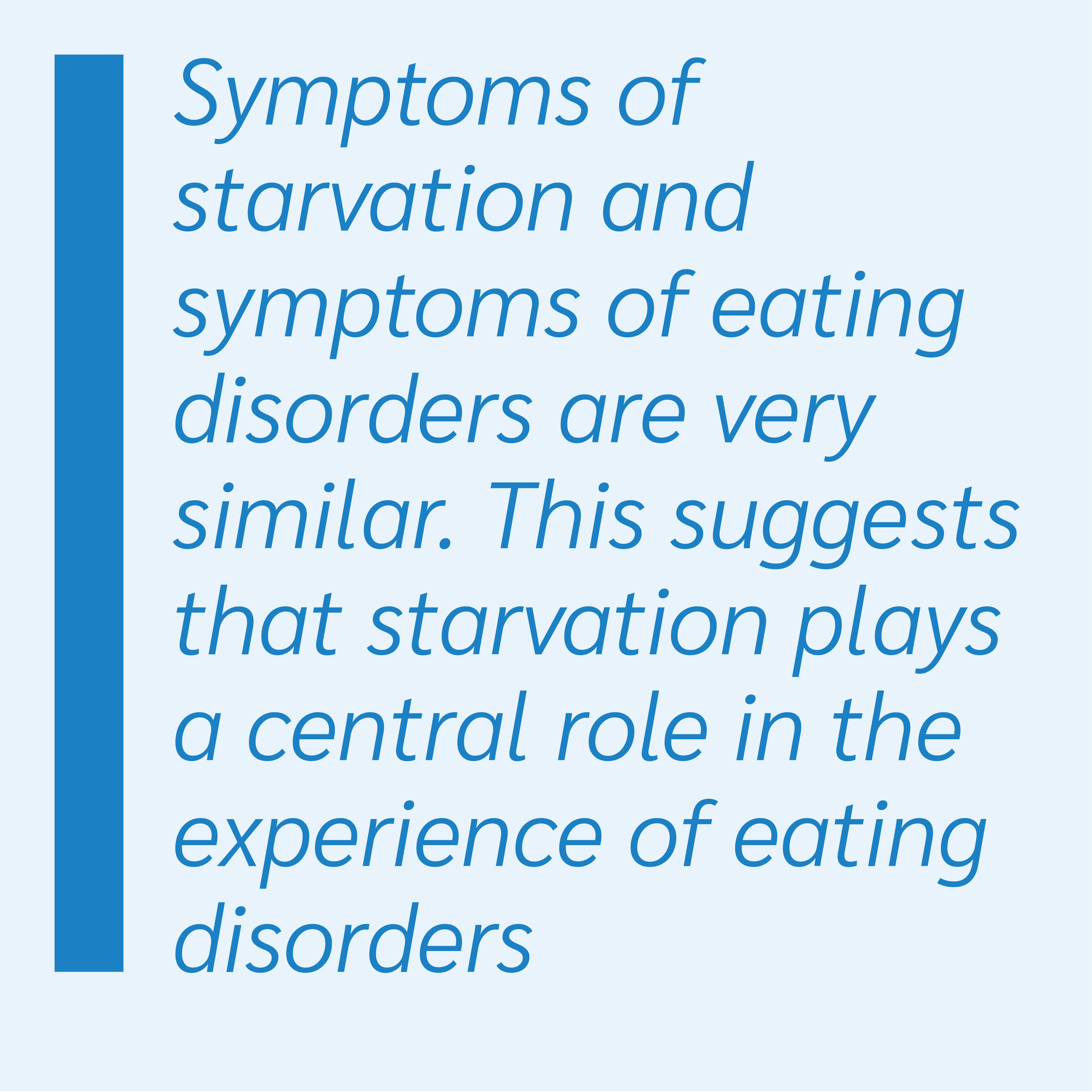 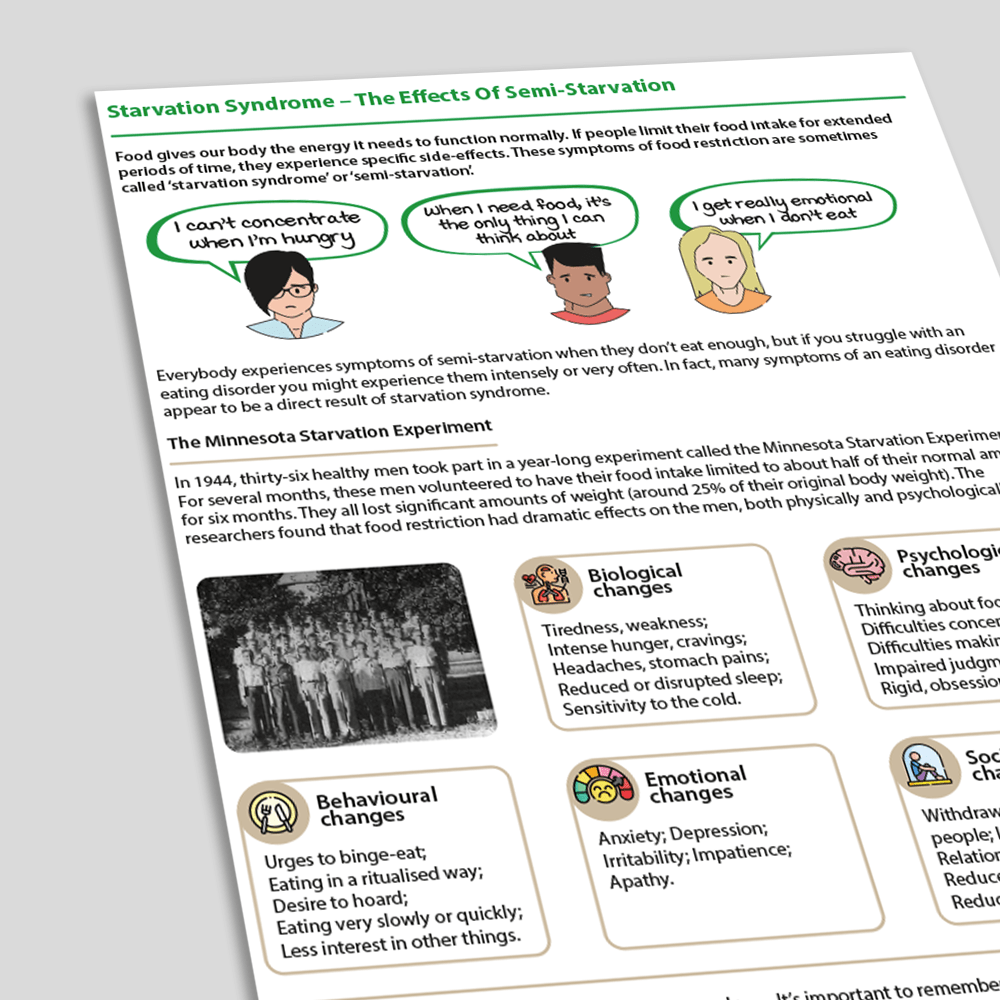 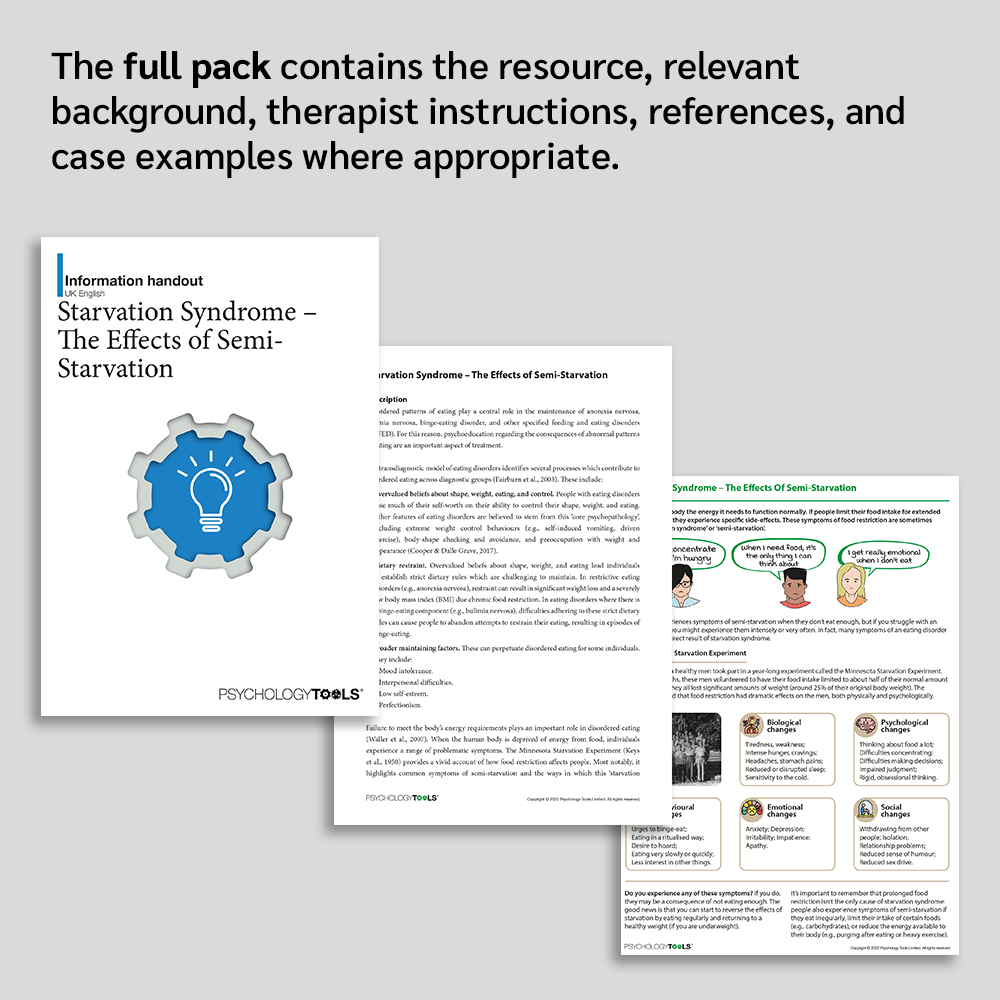 The transdiagnostic model of eating disorders identifies several processes which contribute to disordered eating across diagnostic groups (Fairburn et al., 2003). These include:

Failure to meet the body’s energy requirements plays an important role in disordered eating (Waller et al., 2007). When the human body is deprived of energy from food, individuals experience a range of problematic symptoms. The Minnesota Starvation Experiment (Keys et al., 1950) provides a vivid account of how food restriction affects people. Most notably, it highlights common symptoms of semi-starvation and the ways in which this ‘starvation syndrome’ can establish and reinforce key features of disordered eating.

The Effects of Semi-Starvation

Led by the physiologist Ancel Keyes (physiologist), the Minnesota study began in November 1944 and ended in October 1945. The participants were 36 healthy young men who were conscientious objectors to military service. Recruitment into the project was rigorous: participants needed to be in good physical and mental health and demonstrate an ability to work well with others in difficult circumstances.

The gruelling study was divided into three phases. During the first phase (lasting three months), the participants ate a normal diet while their eating patterns, behavior, and psychology were closely monitored. During the second phase of study (lasting six months), the participants’ food intake was roughly halved, which caused most of them to lose around 25% of their body weight. During the third phase, the men underwent a period of rehabilitation during which they were refed and restored weight. The participants were required to engage in educational activities and exercise throughout the study.

The changes observed in the participants during the semi-starvation phase of the experiment were variable but nonetheless dramatic. Importantly, some of these changes persisted after the participants had restored weight and resumed normal eating. These side-effects of restricted eating (often referred to as ‘symptoms of semi-starvation’) included the following:

For some participants, the effects of semi-starvation were extreme: two were briefly admitted to a local psychiatric facility and one admitted to eating scraps of food out of garbage cans (Kalm & Semba, 2005).

The results of the Minnesota Starvation Experiment reveal a great deal about the consequences of food restriction and weight loss. In the context of eating disorders, the results have several important implications.

Research shows that how we eat and how much we eat can have a big impact on the way we think, feel, and behave. The reason scientists know a lot about this is because of a famous study called the Minnesota Starvation Experiment, which explored the effects of starvation. Can we look at this handout together? I think it could be relevant to the difficulties you are experiencing.