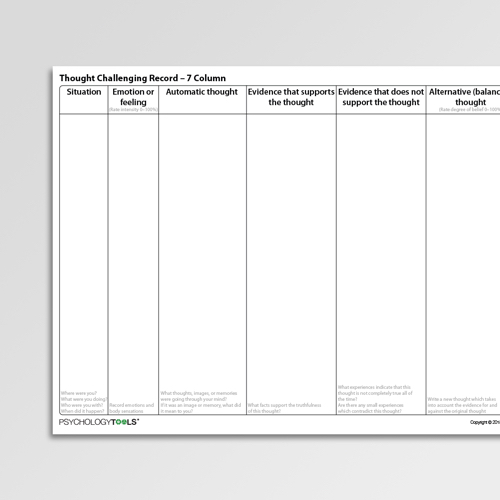 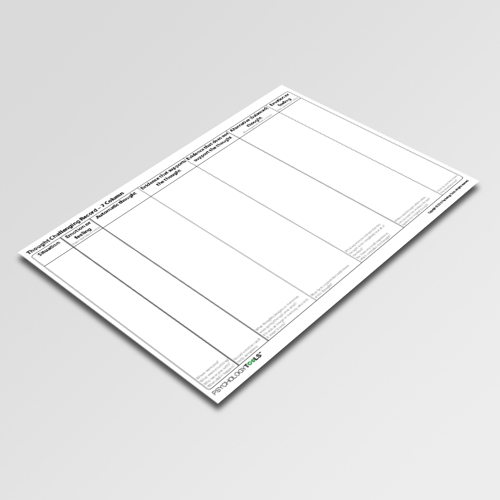 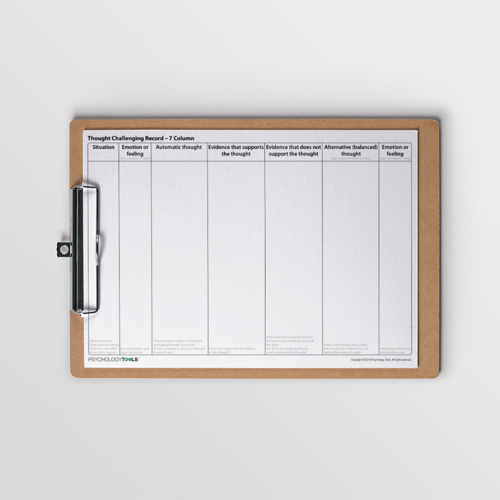 Automatic thoughts that result in negative emotions (e.g. sadness, anxiety, anger) are commonly described as Negative Automatic Thoughts (NATs). Some negative thoughts are accurate representations of the world (e.g. thinking “He could hurt me too” after seeing an acquaintance act violently would be both negative and accurate). However, automatic thoughts are often inaccurate – biased in characteristic ways – and there is considerable evidence that different mental health problems are associated with particular biases in thinking. For example, people who suffer from certain types of anxiety often ‘catastrophize’, and people who are depressed often discount positive information. Beck (1963) and Burns (1980) have described common cognitive biases which are outlined in more detail in our information handout Unhelpful Thinking Styles.

This is a thought record worksheet which guides clients through the process of identifying automatic thoughts, helping them understand the links between thoughts and emotions, challenging the automatic thought by examining evidence for and against, and generating more realistic alternatives that give a ‘balanced’ appraisal of the situation. Clients learning cognitive techniques sometimes need assistance and practice at identifying the link between thoughts and emotions before they move on to challenging thoughts: some clients might find it helpful to practice identifying automatic thoughts using a Simple Thought Monitoring Record before adding additional later steps.

“Everyone has hundreds of ‘automatic thoughts’ every day: these are thoughts that just ‘pop’ into your mind. They often feel so natural to us that we take them as fact even when they’re not: sometimes they are accurate and helpful, and other times they are inaccurate and unhelpful. The way CBT works is that what we think affects the way we feel, and so if we want to change how you feel we need to look at what you’re thinking. A good way of catching and examining your negative automatic thoughts is to use a thought record. Would you be willing to practice one with me now?”