Thought records are commonly used in CBT to help people to evaluate their negative automatic thoughts for accuracy and bias. The Thought Record – Courtroom Trial worksheet uses the metaphor of a courtroom trial. This helps clients to externalize from their negative automatic thought (NAT), and helps to scaffold the process of challenging of the negative thought. The client is encouraged to view the NAT as an accusation, then to adopt the roles of a prosecutor and defense. They then take the position of the jury to pass a judgment before summarizing the evidence with a fair perspective. This format may be helpful when clients are able to identify their negative automatic thoughts (NATs), but they struggle to identify evidence against the NAT and to then generate a balanced, more realistic alternative thought. 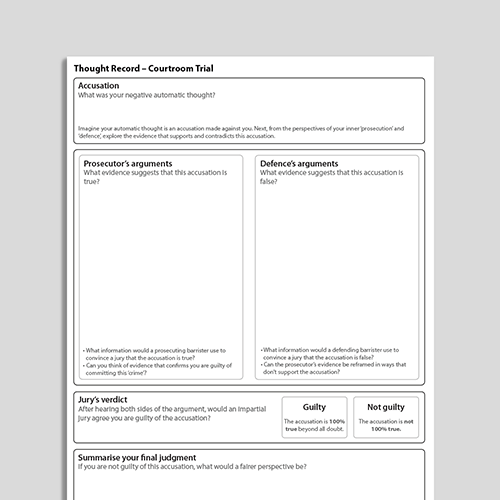 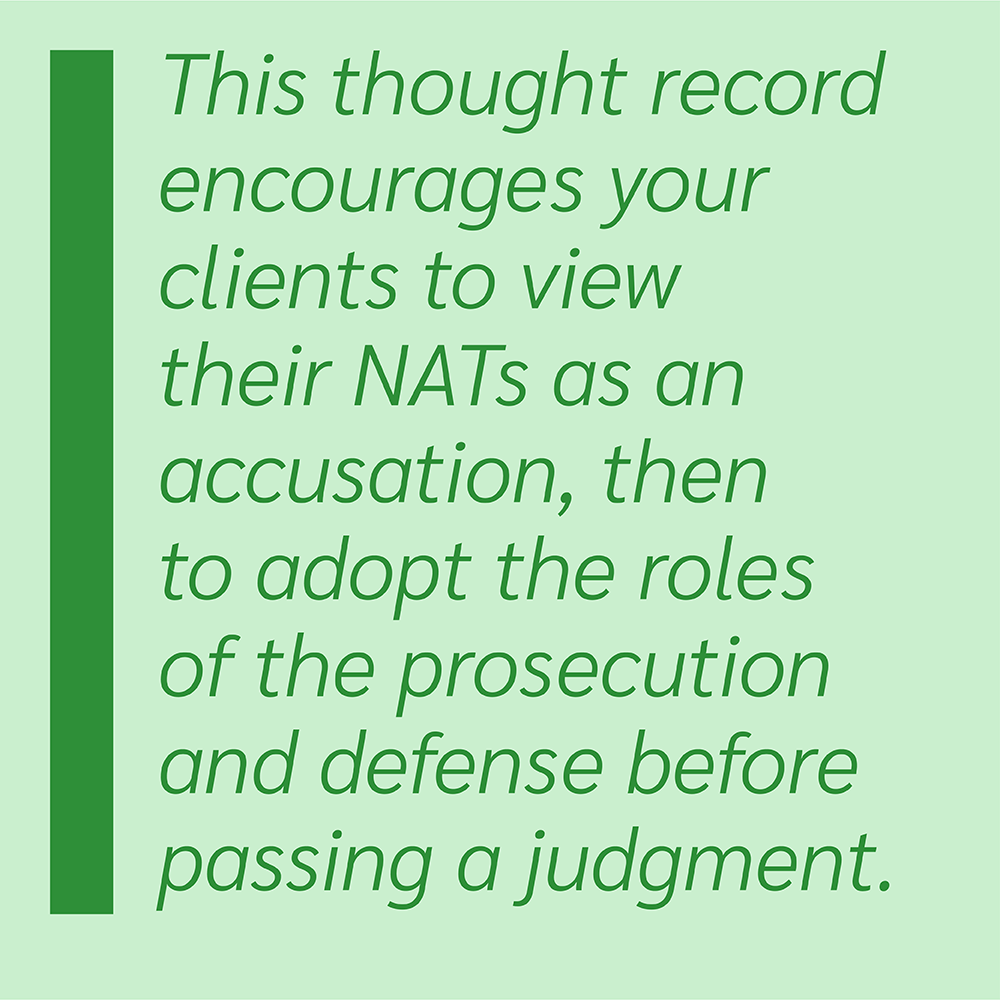 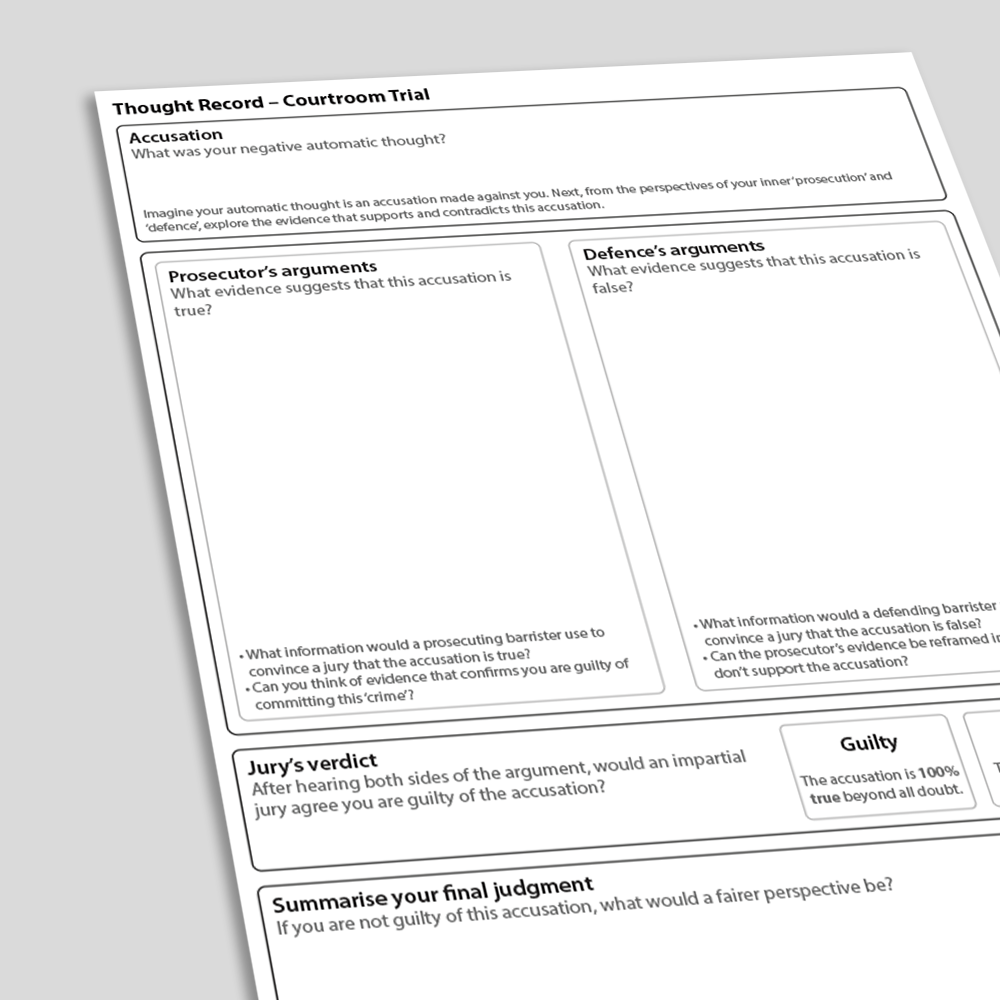 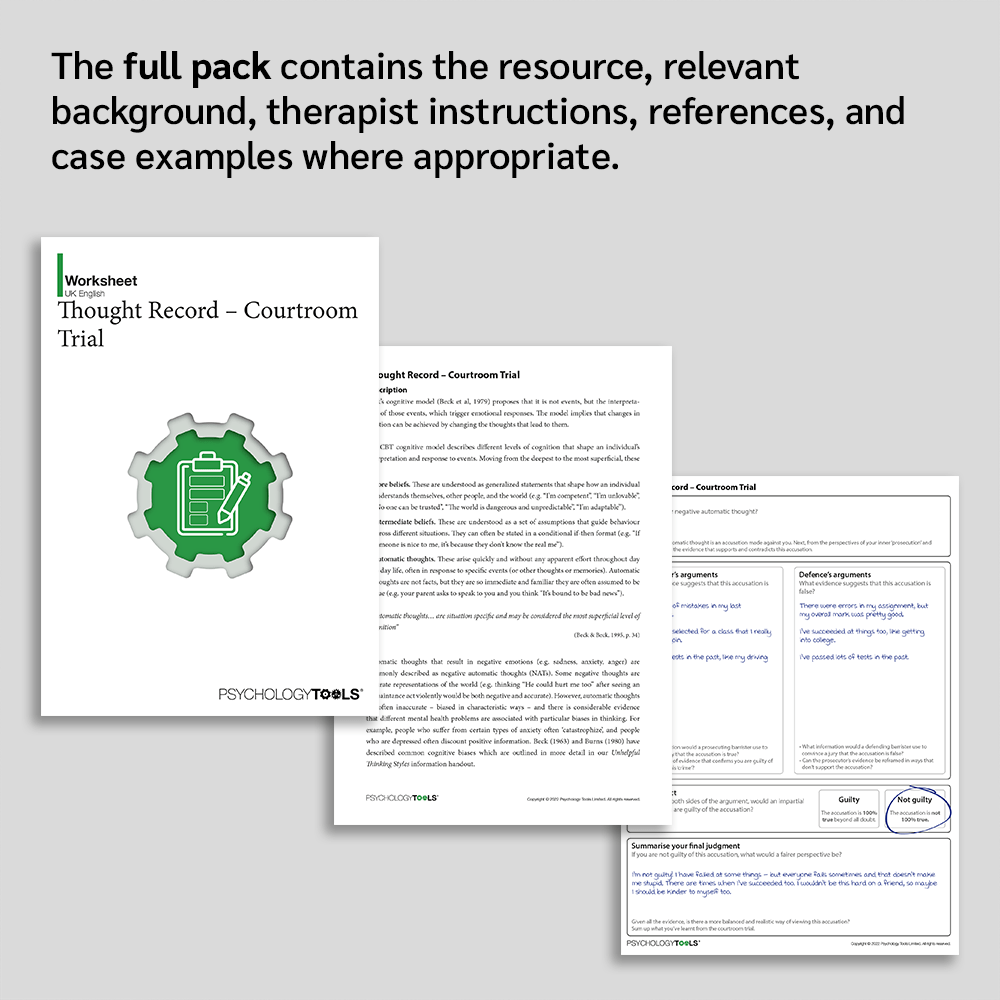 Automatic thoughts that result in negative emotions (e.g., sadness, anxiety, anger) are commonly described as Negative Automatic Thoughts (NATs). Some negative thoughts are accurate representations of the world (e.g., thinking “He could hurt me too” after seeing an acquaintance act violently would be both negative and accurate). However, automatic thoughts are often inaccurate – biased in characteristic ways – and there is considerable evidence that different mental health problems are associated with particular biases in thinking. For example, people who suffer from certain types of anxiety often ‘catastrophize’, and people who are depressed often discount positive information. Beck (1963) and Burns (1980) have described common cognitive biases which are outlined in more detail in our information handout Unhelpful Thinking Styles.

This worksheet is designed to help clients to evaluate the evidence for and against their negative automatic thoughts. It uses the metaphor of a courtroom trial, which can help clients to externalize, ‘de-center’, and take the role of an objective observer. The worksheet guides clients through the process of stating the negative automatic thought as an ‘accusation’. The client is then encouraged to adopt the role of a prosecutor to state the case for the truthfulness of the accusation, and the defense to argue why the accusation is untrue. Once clients have examined the thought from both of these perspectives, they are encouraged to take the role of the jury: to weigh the evidence and to come to a verdict on the truthfulness of the original thought. The final step is to generate a balanced opinion which fairly, dispassionately, and realistically represents all of the evidence presented. This format may be helpful when clients are able to identify their negative automatic thoughts (NATs), but they struggle to identify evidence against the NAT and to then generate a balanced, more realistic alternative thought.

“CBT says that the way we think about a situation affects how we feel. We all have hundreds of ‘automatic thoughts’ every day that just pop into our minds. They often feel so ‘natural’ that we don’t pause to consider whether they are true or not. That’s a problem because our automatic thoughts can often be biased – we can end up feeling bad because our thoughts have been unhelpful or inaccurate. One helpful technique is to ‘put your thoughts on trial’ and treat them like an accusation that is made in a courtroom. Would you be willing to try it with me?”