Skip to main content
> Resources > Thought Record (Evidence For And Against)

Thought Record (Evidence For And Against)

CBT Thought Records exist in multiple variants, depending on the needs and abilities of the client. This Thought Record (Evidence For And Against) is a cognitive restructuring worksheet which guides clients through a process of carefully considering the evidence for their automatic thoughts – a process Beck refers to as ‘examining and reality testing’. 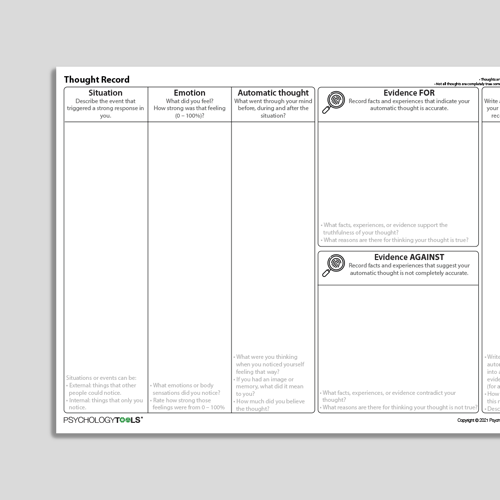 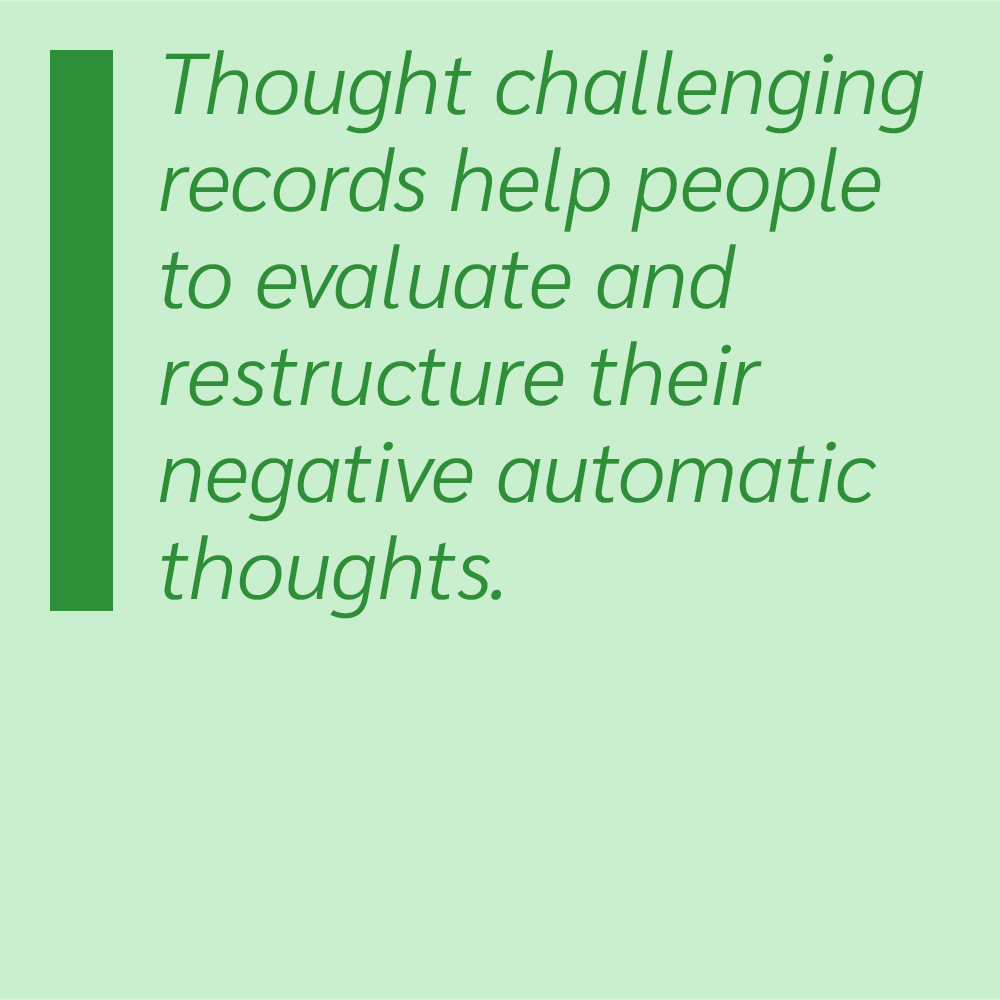 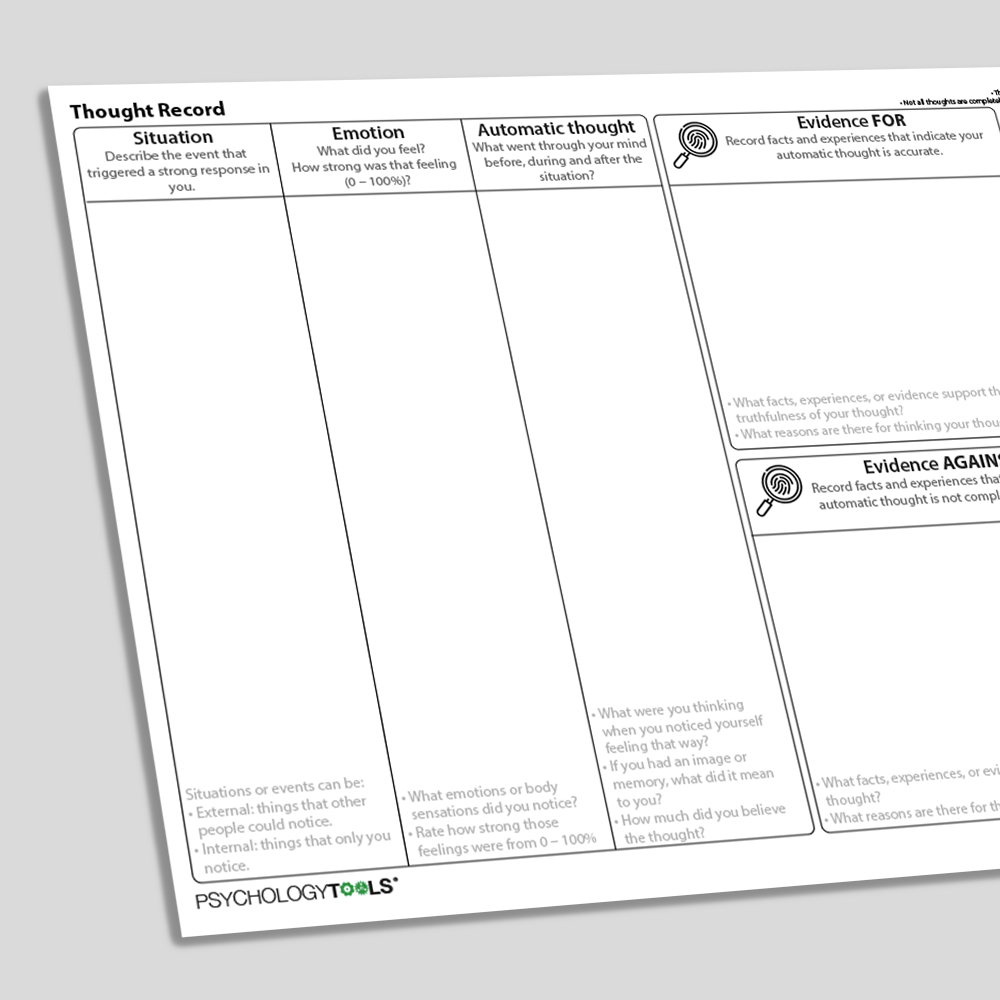 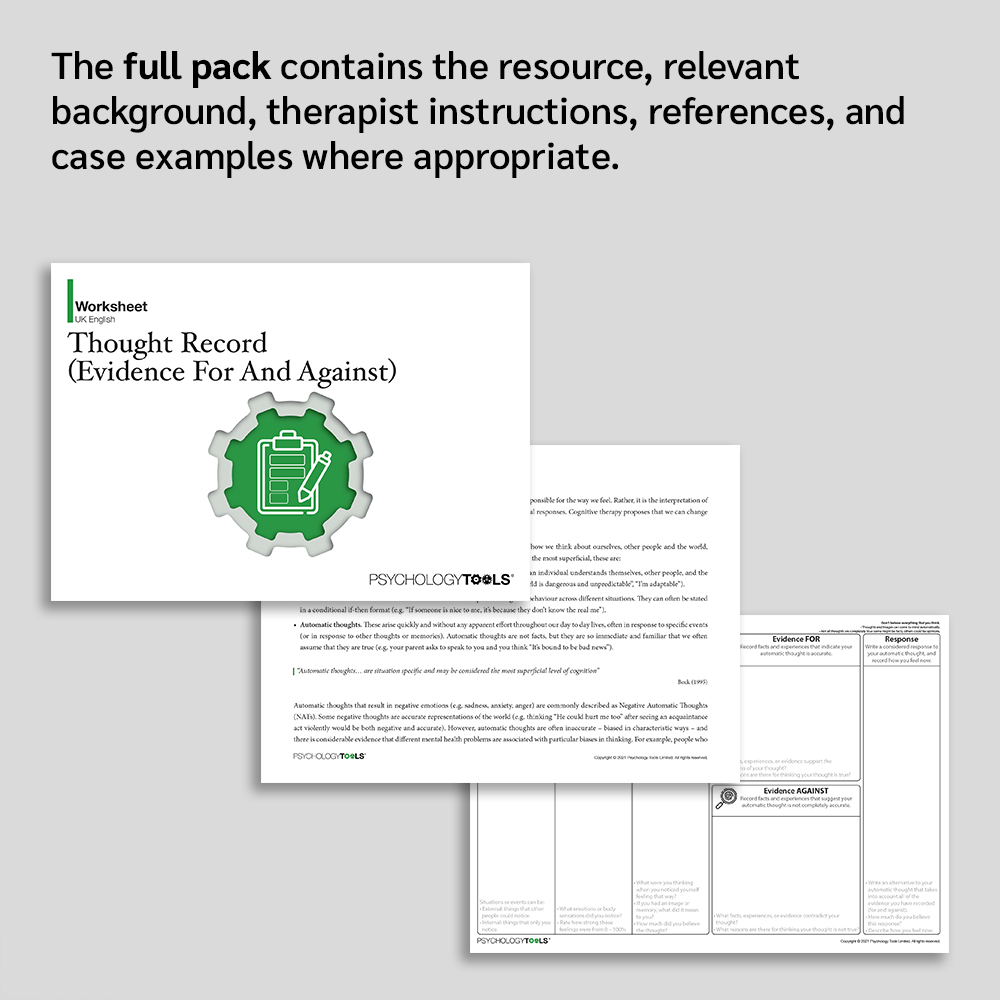 Beck’s cognitive model (Beck et al, 1979) proposes that events are not directly responsible for the way we feel. Rather, it is the interpretation of those events – our appraisals, thoughts, or cognitions – that trigger our emotional responses. Beck’s cognitive therapy proposes that we can change how we feel by changing how we think.

Automatic thoughts that result in negative emotions (e.g. sadness, anxiety, anger) are commonly described as Negative Automatic Thoughts (NATs). Some negative thoughts are accurate representations of the world (e.g. thinking “He could hurt me too” after seeing an acquaintance act violently would be both negative and accurate). However, automatic thoughts are often inaccurate – biased in characteristic ways – and there is considerable evidence that different mental health problems are associated with particular biases in thinking. For example, people who suffer from certain types of anxiety often ‘catastrophize’, and people who are depressed often discount positive information. Beck proposes that people who are depressed are prone to excessive self-blame (personalizing). Beck (1963) and Burns (1980) have described common cognitive biases which are outlined in more detail in our information handout Unhelpful Thinking Styles.

‘Cognitive restructuring’ describes the category of techniques that cognitive therapists use to help their clients to overcome their cognitive biases and think differently. The aim of these techniques is not to ‘think happy thoughts’ or to replace negative thoughts with positive ones, but to overcome biases and think accurately. CBT therapists use a variety of techniques to help their clients to develop cognitive restructuring skills, but a mainstay is the ‘CBT Thought Record’ that helps your clients to identify and challenge their negative automatic thoughts.

CBT Thought Records exist in multiple variants, depending on the needs and abilities of the client. This Thought Record (Evidence For And Against) is a cognitive restructuring worksheet which encourages clients to consider the evidence for their automatic thoughts – what Beck called ‘examining and reality testing automatic thoughts’. The principle underlying this worksheet can be summarized as “what do you believe, and why do you believe it?”.

This six-column CBT thought record can be used to:

“CBT proposes that what we think affects the way we feel. Everyone has hundreds of ‘automatic thoughts’ every day. These are thoughts that ‘pop’ into your mind. Not everything that we think is 100% true. Sometimes the thoughts that we have are facts, but other times they are opinions; sometimes they are accurate and helpful, and sometimes they are inaccurate and unhelpful. People often mistakenly think CBT is about ‘thinking happy thoughts’ but actually it’s about thinking accurately. A good way of catching and examining your negative automatic thoughts is to use a thought record. Would you be willing to practice one with me now?”

1. Situation. Thought records are completed with respect to specific situations, usually involving a sudden change in emotion. Clients can be instructed to complete a thought record when they notice a change in how they are feeling. If a therapist and client are completing a thought record in session, the therapist can start by cueing the client’s memory for an automatic thought by directing them to think about where and when the automatic thought occurred. Record this in the first column. Enough information about the situation should be recorded so that the event can be recalled and discussed when the thought record is reviewed.

2. Emotion or feeling. In the second column record the emotion felt and its subjective intensity. Clinicians can explain that emotions can often be described using one word (whereas more than one word may be needed to describe a thought). Recording how strongly the client feels the emotion is an important step, as their emotional reaction is re-rated at the end of the form.

3. Automatic thought. Automatic thoughts can be described as thoughts which ‘pop’ involuntarily and effortlessly into our minds. They are often concerned with judgements about a situation, other people, or ourselves, or they might be predictions about what will happen in the future. It is important to remember that automatic cognitions can be images or memories as well as thoughts. Prompts to help clients to complete the third column include:

If the client reports multiple automatic thoughts, record them all, but prompt the client to select one to work on at a time. In the case of an image, ask the client to reflect on what the image means to them. For example, if the client has an image of themselves frozen to the spot, it may have an idiosyncratic meaning such as “I’m weak” or “I’m useless”.

4. Evidence FOR. The fourth column is used to record facts, evidence, or experiences supporting the truthfulness of the automatic thought.

5. Evidence AGAINST. Once the client has collected evidence supporting the truthfulness of their thought, they can be encouraged to record evidence that suggests the thought may not be 100% accurate. Clients may initially find this process difficult, and they may need help to overcome their ‘blind spots’. Helpful prompts include:

6. Response. In the sixth column, the client should be encouraged to write a new thought which synthesizes all of the information that they have gathered. The new thought may be considerably longer than the original thought, as it considers the balance of evidence. It may not necessarily be positive, but the aim is to counter the bias in the original negative automatic thought, and to think more realistically.

Once the client has generated a considered response, they can be asked to rate how much they believe in this alternate position, and how they feel emotionally when they consider it.