Concussion is a label given to a group of symptoms after mild traumatic brain injury (mTBI) or mild head injury and is caused by the brain colliding with the skull after the head gets knocked or bumped. People suffering from concussion usually recover quickly, however, around a third of people will experience symptoms that persist longer after the initial injury. The ‘What Is Concussion?‘ information handout is a form of psychoeducation aimed towards people with concussion and their families, friends, or colleagues. 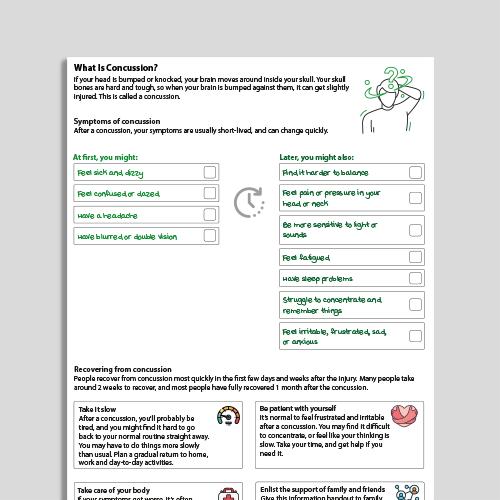 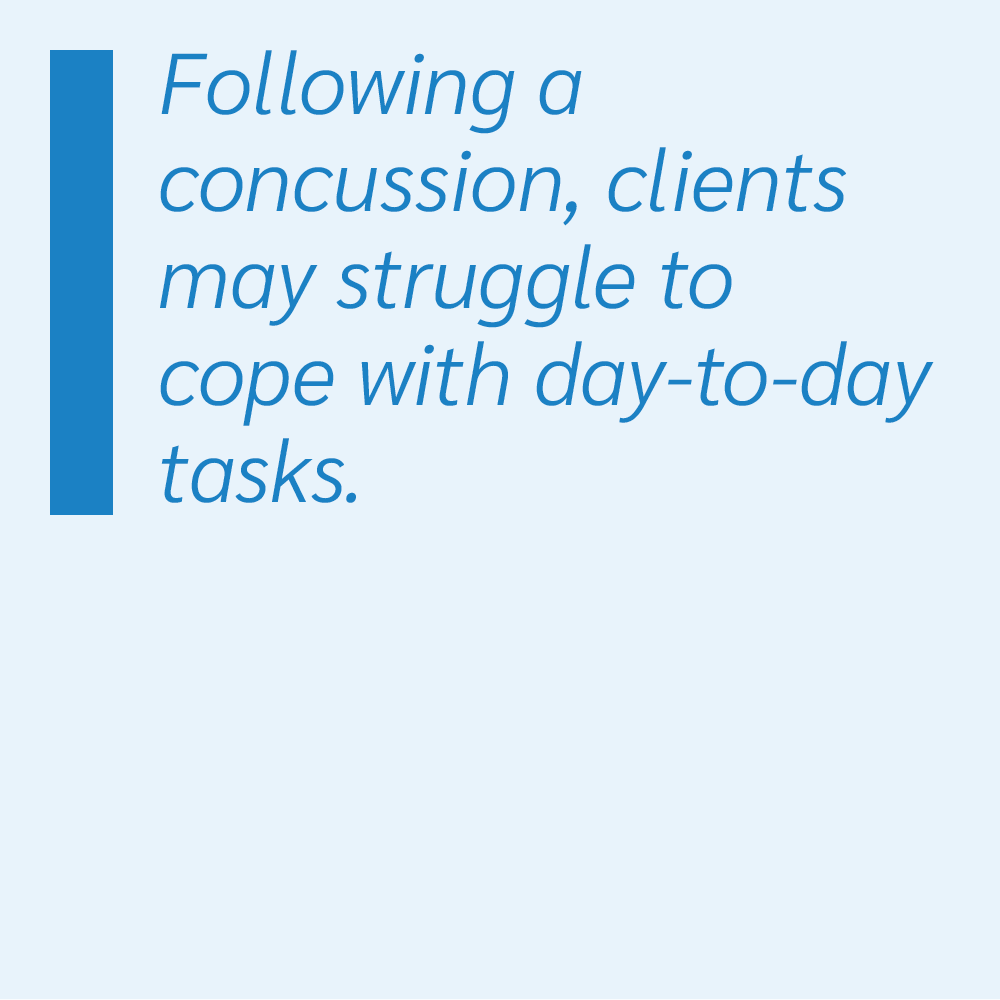 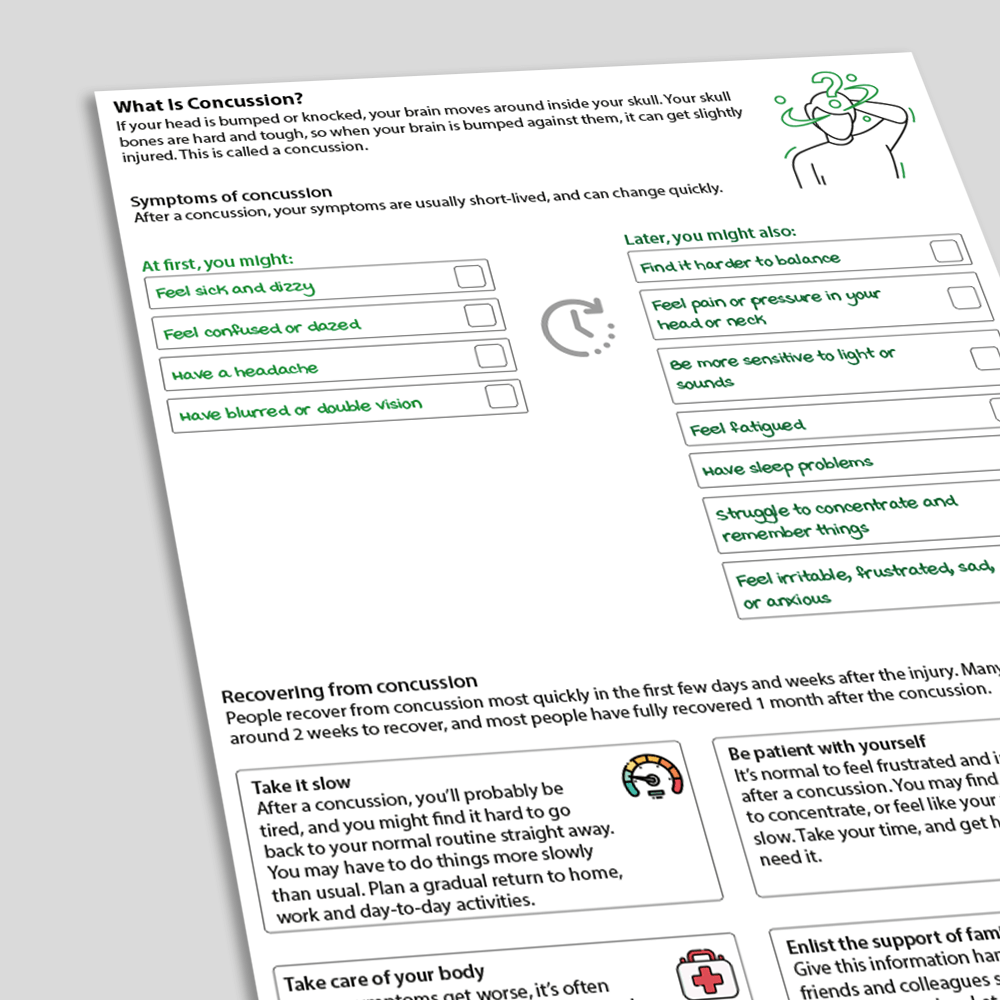 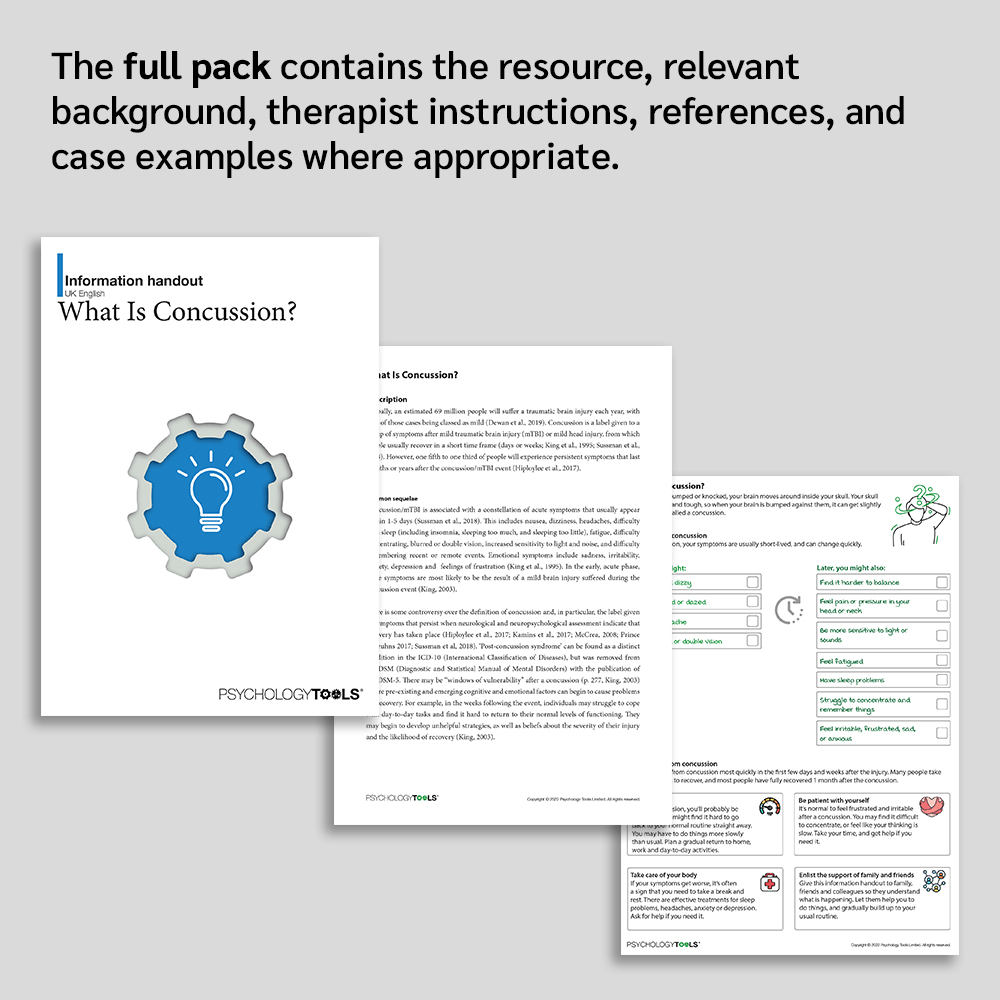 Globally, an estimated 69 million people will suffer a traumatic brain injury each year, with 80% of those cases being classed as mild (Dewan et al., 2019). Concussion is a label given to a group of symptoms after mild traumatic brain injury (mTBI) or mild head injury, from which people usually recover in a short time frame (days or weeks; King et al., 1995; Sussman et al., 2018). However, one fifth to one third of people will experience persistent symptoms that last months or years after the concussion/mTBI event (Hiploylee et al., 2017).

Common sequelae
Concussion/mTBI is associated with a constellation of acute symptoms that usually appear within 1-5 days (Sussman et al., 2018). This includes nausea, dizziness, headaches, difficulty with sleep (including insomnia, sleeping too much, and sleeping too little), fatigue, difficulty concentrating, blurred or double vision, increased sensitivity to light and noise, and difficulty remembering recent or remote events. Emotional symptoms include sadness, irritability, anxiety, depression and feelings of frustration (King et al., 1995). In the early, acute phase, these symptoms are most likely to be the result of a mild brain injury suffered during the concussion event (King, 2003).

There is some controversy over the definition of concussion and, in particular, the label given to symptoms that persist when neurological and neuropsychological assessment indicate that recovery has taken place (Hiploylee et al., 2017; Kamins et al., 2017; McCrea, 2008; Prince & Bruhns 2017; Sussman et al., 2018). ‘Post-concussion syndrome’ can be found as a distinct condition in the ICD-10 (International Classification of Diseases), but was removed from the DSM (Diagnostic and Statistical Manual of Mental Disorders) with the publication of the DSM-5. There may be “windows of vulnerability” after a concussion (King, 2003) where pre-existing and emerging cognitive and emotional factors can begin to cause problems for recovery. For example, in the weeks following the event, individuals may struggle to cope with day-to-day tasks and find it hard to return to their normal levels of functioning. They may begin to develop unhelpful strategies, as well as beliefs about the severity of their injury and the likelihood of recovery (King, 2003).

Recovery & Rehabilitation
The typical recovery time for concussion/mTBI is 2 weeks, and most people have fully recovered 1 month after the event (Iverson et al., 2017). In a prospective study that looked at 30 people who had a concussion whilst playing sport, the group had the same scores 10 days after the concussion as they had before. When researchers examined each person separately, two-thirds of the people had fully recovered after 10 days (Iverson et al., 2006).

Part of the difficulty in tracking recovery from concussion/mTBI is that symptoms are often non-specific and have a high overlap with other conditions or mental health difficulties (e.g. forgetfulness, headache, fatigue, dizziness, irritability; Potter & Brown, 2012). The Rivermead Post Concussion Symptoms Questionnaire (RPQ) is the most widely used tool for tracking symptoms following a concussion/mTBI (King et al., 1995), and a state measure (not a trait measure; Iverson et al., 2006). Some symptoms that were not present in the acute phase may emerge 1-3 months after the event (Barlow, 2016), and are likely to be caused by a combination of cognitive and emotional factors (King, 2003). Psychological factors such as a history of anxiety or depression are among the best early predictors of persistent symptoms, and stress has been shown to exacerbate symptoms (King, 2003). Clinicians should take the time to investigate different conditions and factors that may be contributing towards persistent symptoms, including any pre-existing mental health conditions and stressors (Leddy et al., 2012).

There is evidence that after a concussion, individuals underestimate the number of symptoms they had before the event – such as the frequency of headaches – and may attribute ‘normal’ variations in headaches (for example) to persistent effects from the concussion. This has been called the ‘good old days’ bias (Iverson et al., 2010). Psychoeducation is therefore a critically important part of the early intervention for those recovering from a TBI.

Treatment
Specialist, early intervention that provides education, advice on self-management and reassurance significantly improves outcomes following brain injury (Wade et al., 1998). For concussion/mTBI, such interventions typically occur within the first two weeks after injury, and include family or carers as well as the individual where possible. Psychoeducation should seek to normalise symptoms and stress their transient and treatable nature, as well as give information about the timeline for typical recovery. Self-management should focus on a graduated return to work and normal home life, ways to cope with slowed processing and fatigue, using the worsening of symptoms as a signal to take a break for rest and recovery, and informing individuals about how stress can worsen symptoms (King, 2003).

Persistent symptoms such as sleep disturbance, anxiety, depression and continued headaches can be targeted with specific treatments (Silverberg et al., 2020). For example, cognitive behavioral therapy can be an effective treatment for individuals with persistent symptoms of anxiety, depression and difficulties with social integration (Chen et al., 2020).

Therapists may find it helpful to begin psychoeducation with clients by discussing the nature of their injury and the symptoms they experience. This can lead to normalizing distressing symptoms (see the What Does the Brain Do information handout) and engaging the client and family in optimal self-management strategies. This information handout is designed to introduce your client to concussion. It includes a list of the most common symptoms that clients may experience after a TBI, and helps to set client expectations for the duration and potential frustrations of the recovery process. The design and language have been kept simple so that the handout can be used with a wide range of clients, including those with neurological conditions.