It is surprisingly common to see or hear things that other people don’t, or to hold beliefs that other people might find unusual. Up to 1 in 10 people say that they have heard voices, or seen things that aren’t there at least once in their lifetime [1, 2]. If you keep having experiences like this in a way which causes you distress and prevents you from living your life as you want, you may be experiencing psychosis.

The good news is that there are several helpful treatments available. The most effective psychological therapy for psychosis is called Cognitive Behavioral Therapy (CBT). CBT is a talking treatment for psychosis, which can reduce distress and can help people to recover [3].

Psychosis can make you experience reality in a different way to those around you. Most people who have psychosis describe holding unusual beliefs that others do not share, and seeing or hearing things that others may not. Psychosis can cause a wide spectrum of experiences which include: 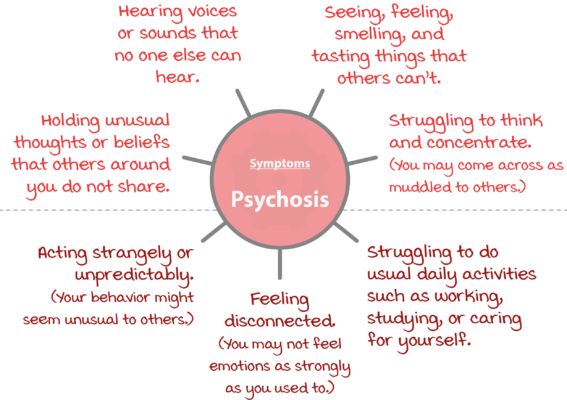 Do any of these symptoms feel familiar to you? Everyone experiences psychosis differently: some people only have a couple of symptoms, whereas others have all of them. To be diagnosed with psychosis, you have to be experiencing at least one of the symptoms in the top section of the diagram (also known as ‘core’ or ‘positive’ symptoms), and these symptoms must be making your daily life more difficult.

Lucy struggled with psychosis, and her story shows what it can feel like:

I’ve been hearing voices for almost twenty years. They first started when I was 13, at high school, which was a really traumatic time for me. I had changed schools the year before the voices started because my parents divorced, and I had to move to a different city with my Mom. Starting a new school was really difficult because I didn’t know anyone, and a group of girls bullied me. They kept calling me names and sometimes beat me up. I first noticed the voices when I was in class. At first, they commented on what I was doing, but soon they got worse and were criticizing me every day, saying the same things that the bullies were saying to me.  I have heard these voices ever since.

The voices tell me that I am worthless and will never make anything of my life, which I suppose I believe too. They keep criticizing me when I am at work and say that no one likes me, which makes it really hard to focus and do my job. They make me feel low, and rubbish about myself. Some days I just want to stay in bed and not have to face the world, so I call in sick at work. I try not to listen to the voices by ignoring them or playing loud music, but it’s really hard, especially at work.

Do I experience psychosis?

Psychosis should only be diagnosed by a mental health professional or doctor. However, answering the screening questions below can give you an idea of whether you might find it helpful to have a professional assessment.

If you answered ‘sometimes’ or ‘often’ to several of the questions, you could be experiencing the symptoms of psychosis. You might find it helpful to speak to a mental health professional about how you are feeling.

What makes you vulnerable to psychosis?

There is no single cause for psychosis. Some things that make you more likely to experience psychosis include:

What triggers an experience of psychosis?

When symptoms of psychosis develop, there is usually an event that started the experience, called a trigger. Trigger events can be split into two groups:

You might think these experiences all sound quite normal. You would be right – lots of us have experiences like these without being bothered by them.

Psychologists think that what makes psychosis different is the meaning you make of your experiences. You can learn more about this idea below.

Research studies have shown that Cognitive Behavioral Therapy (CBT) is a helpful psychological therapy for psychosis. CBT therapists work a bit like firefighters: while the fire is burning they’re not so interested in what caused it, but are more focused on what is keeping it going, and what they can do to put it out. This is because if they can work out what keeps a problem going, they can treat the problem by ‘removing the fuel’ and interrupting this maintaining cycle. In 2001, clinical psychologist Anthony Morrison published a model of psychosis which describes some of the ‘parts’ that keep psychosis going [8,9].  These are:

CBT is a popular form of talking therapy. CBT therapists understand that what we think and do affects the way we feel. Unlike some other therapies, it is often quite structured, and sixteen to twenty-four sessions are usually recommended. After talking things through so that they can understand your problem, you can expect your therapist to set goals with you so that you both know what you are working towards. You should seek out a therapist who has specialist training and experience in treating psychosis. At the start of most sessions you will set an agenda together so that you have agreed what that session will concentrate on.

Family interventions are a form of talking therapy in which families play an important role.  Their involvement and support have been shown to improve recovery outcomes for people experiencing psychosis, and people with psychosis usually receive up to sixteen sessions. Family intervention encourages everyone to work to improve their understanding of psychosis and how to cope with it. It can also include solving key problems, and processing what has happened.

Medical treatments for psychosis are recommended as a first-line treatment alongside psychological therapy. The American Psychiatric Association (APA) and the UK National Institute for Health and Care Excellence (NICE) guidelines recommend that antipsychotic medication should be offered to people who experience psychosis. The type of medication should be carefully decided upon with the professionals who help you and the people who care for you. The mental health professional prescribing the medication should give you plenty of opportunities to discuss its benefits and side effects with you before deciding.

This article was written by Dr Lisa Wood and reviewed by Dr Matthew Whalley, both clinical psychologists. It was last reviewed on 2021/12/07.