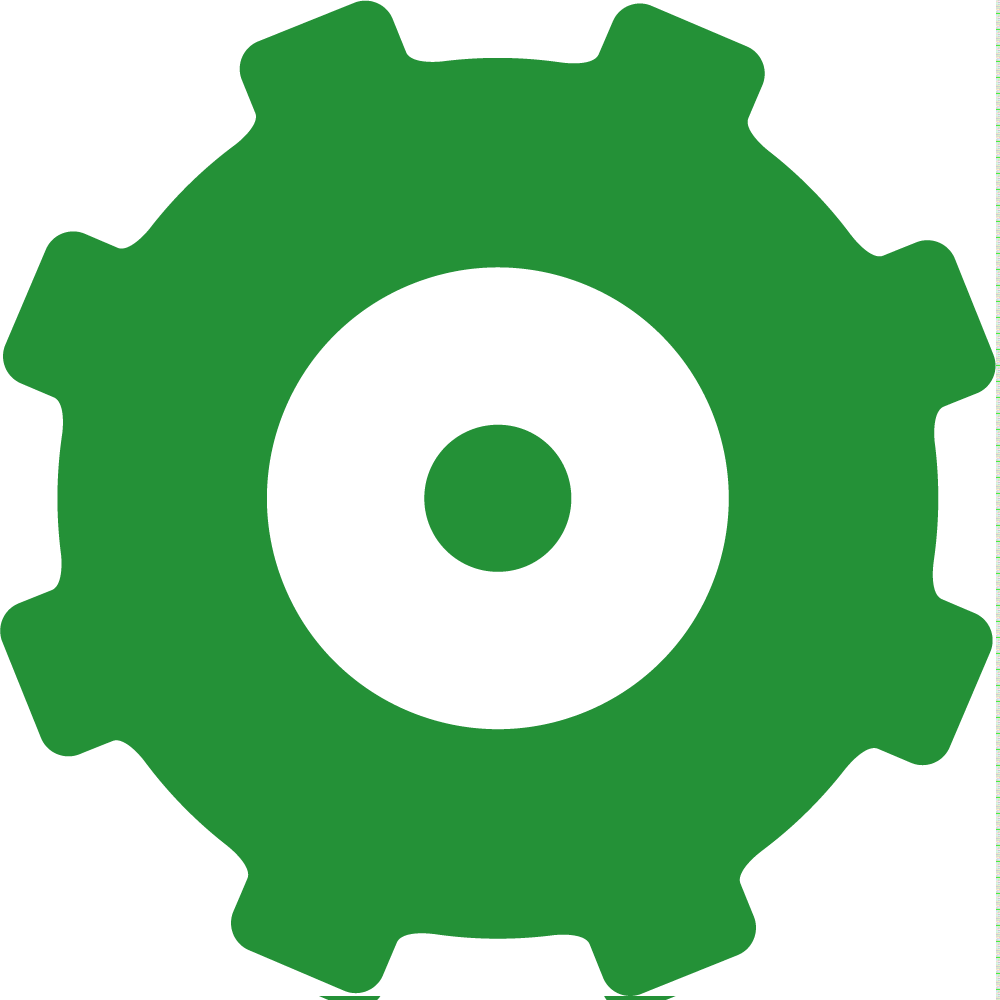 Welcome to the December 2022 newsletter. This month we’re pleased to announce the release of two new resources related to perfectionism, and an update to our hugely popular Understanding… series. We also have our regular research roundup, this month focusing on parent-led CBT for child anxiety, the Talking with Voices approach, and the additive effects of emotional regulation training in the treatment of PTSD following childhood abuse. 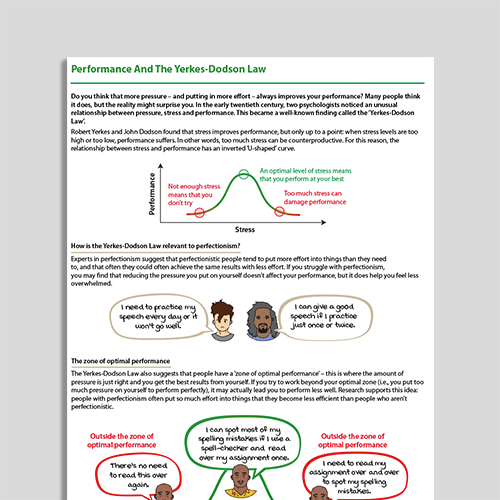 The Performance And The Yerkes-Dodson Law handout provides an overview of the Yerkes-Dodson Law. It describes the ways in which excessive effort can be unnecessary and unhelpful when working towards goals. The handout also introduces the idea of experimenting with one’s ‘zone of optimal performance’ and approaching tasks more flexibly.

Performance And The Yerkes-Dodson Law 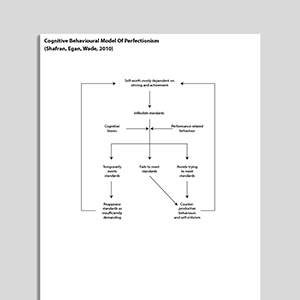 The high levels of perfectionism observed amongst individuals with eating disorders led Shafran and colleagues (2002) to develop the first cognitive behavioral model of perfectionism. The model was later revised to explain the role of performance-checking behaviors in perfectionism more explicitly (Shafran, Egan & Wade, 2010). This handout describes their model, and is designed to help clinicians formulate effectively when working with perfectionism. 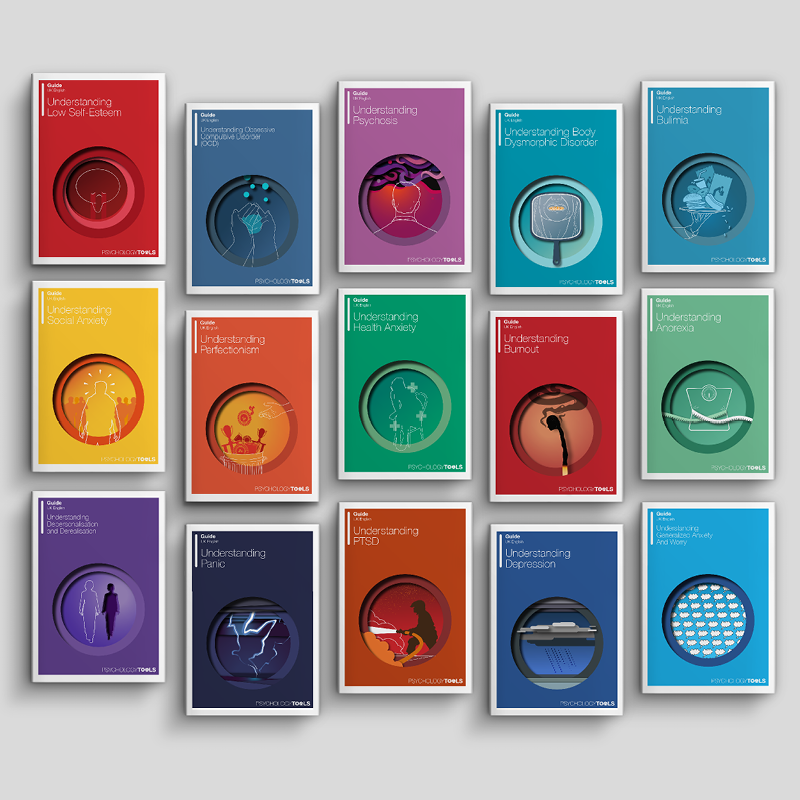 All fifteen of our Understanding… guides have been reformatted into our new, more accessible, layout. These guides are designed to give your clients a solid introduction to their condition. Helping them to recognise symptoms, understand the experiences of other people suffering with similar problems, and to understand maintenance mechanisms which can perpetuate a condition.

CBT is an effective treatment for child anxiety disorders, but access to treatment remains a major challenge. Interestingly, a recent Cochrane review found no evidence of differences in child outcomes on the basis of therapist contact time. Cathy Cresswell, Chloe Chessell and Gemma Halliday argue that a parent-led approach, with a therapist supporting them, to implement CBT strategies with their child, is an effective approach. This important paper reviews some of the evidence of parent-led CBT, but goes on to explore some of the common concerns and challenges raised by clinicians about delivering parent-led CBT. These include concerns about lack of experience working with parents & carers, and concerns about working with highly anxious parents, and the challenges of engaging parents.

"Parents commonly feel disempowered at the start of treatment and may have some reluctance to engage in a parent-led approach. This is understandable given the difficulties parents often face accessing evidence-based treatment for their child and their common concerns about being negatively judged by professionals. Furthermore, parents often arrive with the expectation that a clinician will work directly with their child to help them to overcome their difficulties. Using [a] case illustration we will highlight the key ways through which we were able to empower this parent to engage whilst adhering to the treatment model."

Parent-Led CBT For Child Anxiety
Are There Additive Effects Of Emotional Regulation In The Treatment Of PTSD?

There is some division in the world of trauma therapy regarding the necessity for a ‘stabilization’ phase prior to the processing of trauma memories. Sequential treatments such as DBT-PTSD and STAIR-MPE have been effective in the treatment of PTSD to experiences of childhood abuse (Bohus et al, 2013; Cloitre et al, 2010). The additive benefit of such interventions remains an empirical question. This study by Sandra Raabe and colleagues compared the use of Imagery Rescripting (ImRs) with STAIR + ImRs in the treatment of PTSD to childhood trauma. They found no difference in effect size between ImRs and STAIR+ImRs, with comparable dropout between conditions. (Supporting two recent studies which found no added effect of STAIR on PE or EMDR).

"This indicates that a phased treatment may not always be necessary to lower drop-out rates, and that ImRs may be well suited as a stand-alone treatment for CA-related PTSD ... Interestingly, ImRs also achieved large effects on improvement of emotion regulation, which is specifically targeted by STAIR. One explanation might be that emotion regulation cannot only be improved by instructing patients to use skills but that the process of change of meanings inherent in ImRs and the reduction of re-experiencing may be an alternative pathway. In addition, ImRs may improve emotion regulation by (a) creating a corrective experience and facilitating the expression of both positive and negative emotions, (b) improving the acceptance of these emotions and (c) facilitating a shift from negative to positive emotions by the specific actions performed during ImRs."

ImRs vs. STAIR+ImRs
Talking With Voices

A fascinating qualitative study from Kerry Middleton, Anne Cooke and Rufus May exploring experiences of the TwV approach from the perspective of voice-hearers, and also of their voices.

"Dialogical approaches can be broadly clustered into two overlapping strands ... Avatar Therapies and Relating Therapy focus on helping the voice-hearer develop assertive communication with a persecutory voice ... Conversely CFTp [Compassion Focused Therapy for Psychosis] and HVM-led [Hearing Voices Movement] approached focus on helping the voice-hearer to develop a more peaceful relationship with a persecutory voice ... [In the TwV approach] voices are construed as "disowned" (or dissociated) selves or parts of the self, which relate to adversity in the voice-hearer's life and can play an adaptive role by signposting unresolved emotional vulnerabilities ... Further, the approach positions these "dissociated" selves as dialogical (i.e. parts of self that can be conversed with and relate to each other), suggesting that verbal engagement with voices might be a possible way to decrease conflict and promote better relationships between a person's selves."

"Voices themselves had mixed opinions about using the approach. Sometimes fear had led them to discourage hearers from engaging with it:
Erin's voice, Sylvester: "It was a very fragile time, and I remember how involved and excited Erin was and I was glad that she became more cautious ... Erin was lucky that [the facilitators] were trustworthy people and that it was kept safe, and she had some skills already to keep herself safe. [If that wasn't so], she could have been taken advantage of."