The use of imagery has a long history in psychotherapy. In the eighteenth century, Mesmer and the early practitioners of hypnosis practiced the therapeutic use of imagination and suggestion, although they wrongly attributed the effects to animal magnetism. In the nineteenth century Pierre Janet pioneered the use of imagery interventions to work with individuals who had experienced trauma, using techniques to substitute positive images for traumatic ones. Throughout the twentieth century imagery techniques were widely practiced by therapists using hypnosis, including the development of the widely used ‘affect bridge’ technique by John Watkins (1971). Carl Jung’s use of imagery was inspired by his own vivid dreams, and imagery and dramatization were present in Perls’ Gestalt therapy. David Edwards has given an number of excellent accounts of the use of imagery in psychotherapy (Edwards, 2007, 2011). Read more
71 languages 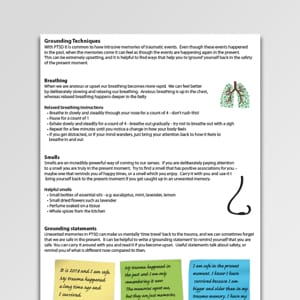 Individuals who have experienced trama often find it difficult to stay within the ‘window of tolerance’. Grounding techniques (which can b ... https://www.psychologytools.com/resource/grounding-techniques/ 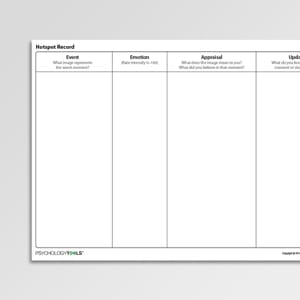 Enhanced ‘reliving’ in trauma-focused CBT for PTSD involves addressing the meaning associated with ‘hot spots’ of traumatic me ... https://www.psychologytools.com/resource/hotspot-record/ 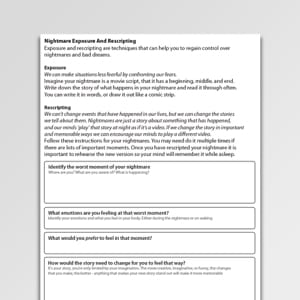 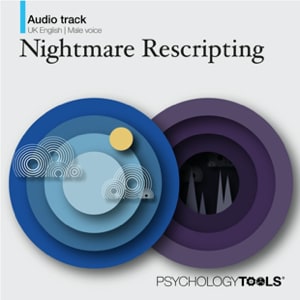 Nightmare rescripting is an evidence based treatment for nightmares, with medium to large effect sizes on nightmare frequency, distress, intensity, an ... https://www.psychologytools.com/resource/nightmare-rescripting-audio/ 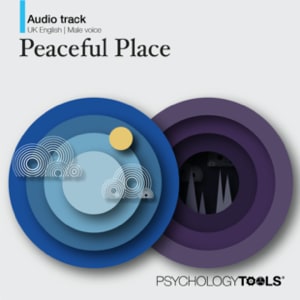 The Peaceful Place exercise guides the listener through a short imagery exercise designed to facilitate the visualization of soothing imagery and noti ... https://www.psychologytools.com/resource/peaceful-place-audio/ 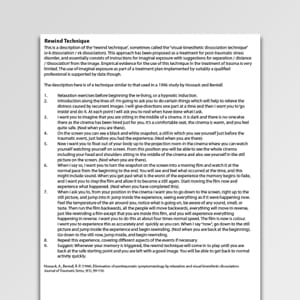 The Rewind Technique is a simple technique for processing traumatic memories and involves an element of exposure. It is best practiced within a formul ... https://www.psychologytools.com/resource/rewind-technique/ 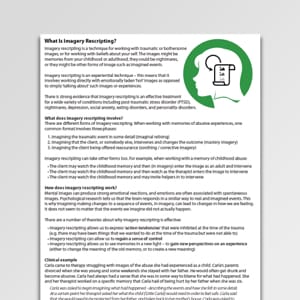 What Is Imagery Rescripting?

Unwanted images are a feature common to a variety of problems including PTSD and depression. Imagery rescripting is an evidence-based treatment techni ... https://www.psychologytools.com/resource/what-is-imagery-rescripting/

Imagery rescripting is a particular type of imagery frequently used in the treatment of symptoms of PTSD such as flashbacks and nightmares. There is also evidence that it could be useful in the treatment of intrusive images in other conditions including depression.

The rewind technique is frequently used by practitioners of NLP. Although there’s not much scientific evidence for the effectiveness of NLP in general the rewind technique shares commonalities with other forms of exposure therapy and so is inlcuded here.

Although cognitive behavioral therapy (CBT) is portrayed as being concerned with thoughts, it has a long history of attending to client images and the meaning contained within them. There is evidence that imagery can produce more powerful emotional responses than verbal representations (Holmes et al., 2006). It is often claimed that imagery work can lead to changes in felt emotion, and that it can be especially useful when clients are stuck using cognitive techniques alone: ‘I hear what you’re saying, but I don’t feel it.’

Hackmann, Bennett-Levy, and Holmes (2011) identify a taxonomy of approaches for working with imagery:

· Learning to discriminate between imagery and reality

· Transformation of images, memories, and dreams

Techniques for Using Imagery in Therapy