Narrative exposure therapy (NET) is a short-term treatment for survivors of multiple and complex trauma, developed by Maggie Schauer, Frank Neuner, and Thomas Elbert. The evidence base supports the use of NET for survivors of multiple trauma and NET is recognized by the UK National Institute for Health and Care Excellence as an evidence-based treatment for PTSD. Read more
70 languages 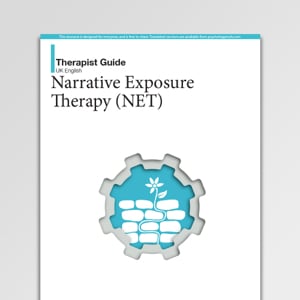 Narrative Exposure Therapy (NET) is an empirically validated treatment for survivors of multiple traumatic events who are suffering from post-traumati ... https://www.psychologytools.com/resource/narrative-exposure-therapy-net/ 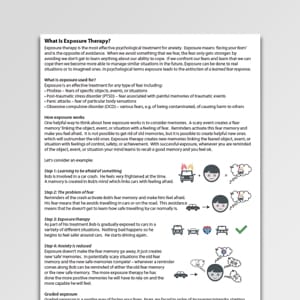 What Is Exposure Therapy?

Exposure is an effective evidence-based treatment for fear. This information handout describes the key principles of Exposure Therapy. Clients who are ... https://www.psychologytools.com/resource/what-is-exposure-therapy/

What Is Narrative Exposure Therapy?

NET is grounded in emotional processing theory (Foa & Kozak, 1986), which proposes that hypothetical ‘fear structures’ in memory are represented in a network containing “(a) information about the feared stimulus situation, (b) information about verbal, physiological, and overt behavioral responses; and (c) interpretive information about the meaning of the stimulus and response elements of the structure”. Foa and Kozak proposed that treating fear and anxiety is achieved through modifying elements of this fear network by activating the memory and introducing new, incompatible, information. For example a trauma survivor might be asked to remember the moment of their trauma when they believed ‘I’m going to die’ and would be asked ‘What do you know now?,’ thus introducing the incompatible information ‘I survived.’ NET recognizes that PTSD is best understood as a disorder of memory with more recent findings relevant to autobiographical memory (Elbert, Schauer, & Neuner, 2015) indicating that traumatic experiences can sometimes lead to a dissociation between contextual representations of an event (C-REPS) and sensory representations (S-REPS: Brewin, Gregory, Lipton, & Burgess, 2010).

In technical terms the psychotherapeutic approach taken by NET includes elements of:

The process of NET is described in the treatment manual (Schauer, Neuner, & Elbert, 2011) and in a review chapter (Elbert, Schauer, & Neuner, 2015). NET begins with an assessment of the patient’s mental health needs and psychoeducational information is given concerning trauma, memory, symptoms, universal human rights, and treatment rationale.

NET starts with a biographical overview of the life span which is symbolized in a ritual called the lifeline. In this exercise positive and negative life events are symbolized by stones and flowers, which are placed along a line. The patient places important events along a line while briefly classifying them in a factual way. Concluded in one session, the lifeline provides an overview (‘map’) of the subsequent work.

In subsequent NET sessions the patient is helped to construct a chronological narrative of his/her life story with a particular focus on traumatic experiences. The patient is asked to recount their life story in chronological order and whenever a ‘stone’ (traumatic event) is encountered it is relived and narrated in a moment by moment manner—with exploration of sensory information, cognitions, affective and bodily reactions—without losing connect to the ‘here and now.’ The therapist can record the results as a testimony that can be used for documentary purposes. In each subsequent session the autobiography is briefly repeated, details corrected, and further events are processed. This process is repeated until the patient’s life span has been covered. In the final session the lifeline may be re-reviewed, the testimony read aloud and signed by the patient/therapist/translator. In some cases patients may agree for copies to be passed to lawyers or human rights organizations to document the events that occurred.