Human thinking is subject to a number of characteristic biases. In the 1960s, Aaron Beck identified several of these biases which were common in his depressed patients and labelled them ‘cognitive distortions’. An early student of Beck, David Burns, later expanded Beck’s original list of cognitive distortions but instead used the term unhelpful thinking styles to describe them. This information handout is intended as a useful prompt to facilitate cognitive restructuring—the process of helping individuals overcome their biases and think in a ‘balanced’ way—which is a key component of cognitive behavioral therapy (CBT). The term ‘Unhelpful Thinking Styles’ sounds less pejorative than ‘Cognitive Distortions’ or ‘Thinking Errors’ and may help your clients approach cognitive restructuring in a more friendly and accessible way. 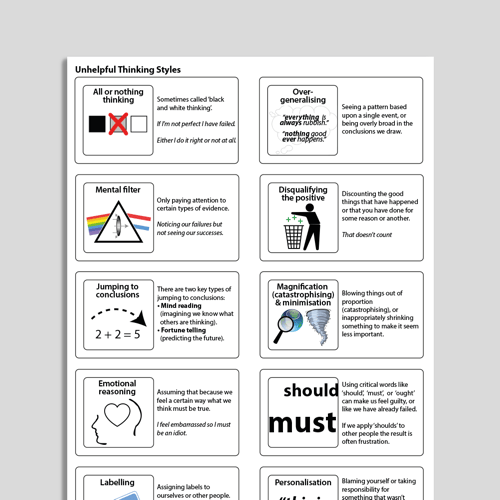 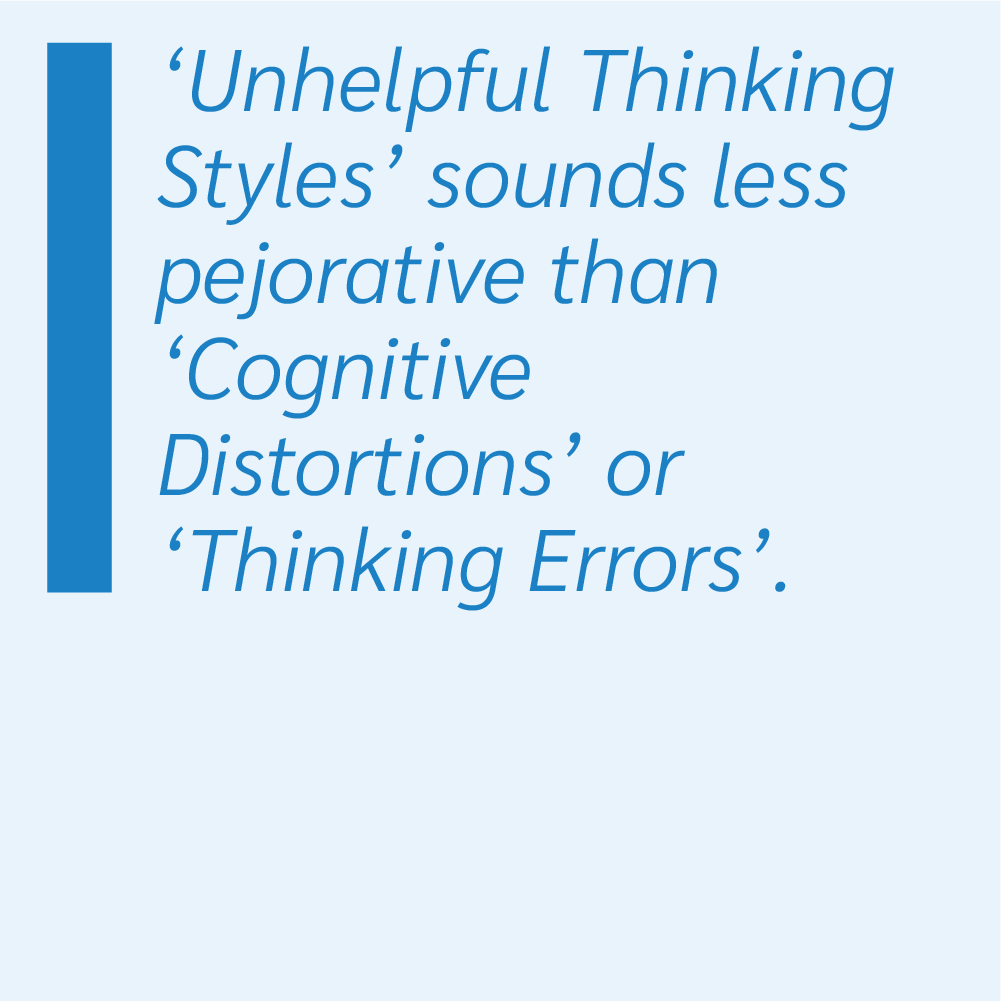 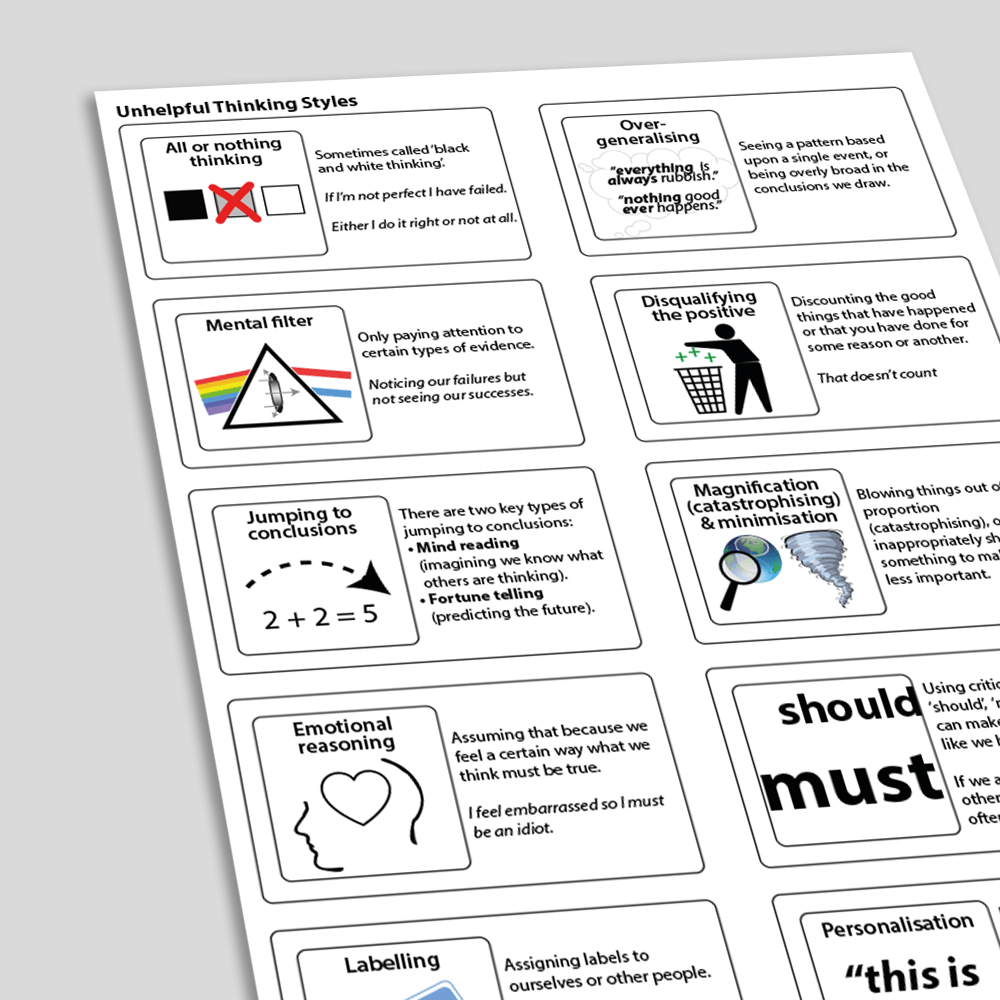 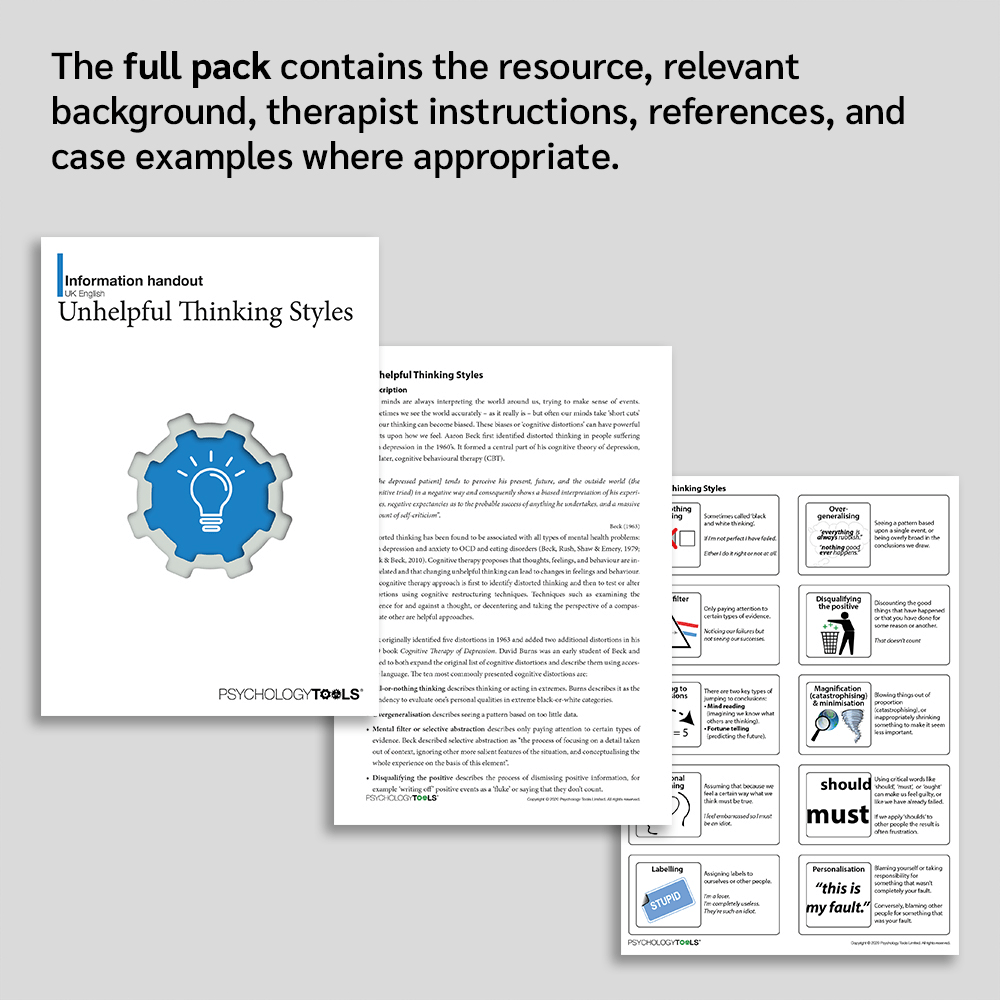 Our minds are always interpreting the world around us, trying to make sense of events. Sometimes we see the world accurately – as it really is – but often our minds take ‘short cuts’ and our thinking can become biased. These biases or ‘cognitive distortions’ can have powerful effects upon how we feel. Aaron Beck first identified distorted thinking in people suffering from depression in the 1960’s. It formed a central part of his cognitive theory of depression, and later, cognitive behavioral therapy (CBT).

“[The depressed patient] tends to perceive his present, future, and the outside world (the cognitive triad) in a negative way and consequently shows a biased interpretation of his experiences, negative expectancies as to the probable success of anything he undertakes, and a massive amount of self-criticism”. Beck (1963)

Distorted thinking has been found to be associated with all types of mental health problems: from depression and anxiety to OCD and eating disorders (Beck, Rush, Shaw & Emery, 1979; Clark & Beck, 2010). Cognitive therapy proposes that thoughts, feelings, and behavior are inter-related and that changing unhelpful thinking can lead to changes in feelings and behavior. The cognitive therapy approach is first to identify distorted thinking and then to test or alter distortions using cognitive restructuring techniques. Techniques such as examining the evidence for and against a thought, or decentering and taking the perspective of a compassionate other are helpful approaches.

Sometimes the thoughts we have don’t paint a fair picture of what has happened to us. For example, you might make a mistake one time and overgeneralize by thinking to yourself “I never get things right!”. This isn’t fair because it’s an exaggeration – it is likely that there are lots of times when you do things successfully. Or your partner might be late home from work and you jump to the conclusion – without any evidence – “they’ve been hurt in a car crash”. We call these thinking habits ‘unhelpful thinking styles’ because they can cause us suffering. This page describes the most common unhelpful thinking styles that are experienced by everyone at some point. I wonder, do you recognize yourself in any of these biases?