Obsessions are thoughts, images, and impulses that pop – unwanted – into your mind and which cause you distress. Compulsions are the actions (observable or not) that you take in response to your obsessions. You might perform a compulsion with the goal of reducing your anxiety, or with the intention of preventing a dreaded outcome. People who experience both obsessions and compulsions are said to have obsessive compulsive disorder (OCD) and it is thought that between 1 and 2 people out of every 100 experience OCD every year [1]. OCD responds well to psychological treatments including cognitive behavioral therapy (CBT) and exposure and response prevention (ERP).

Monica’s fear that she would harm her baby

Shortly after the birth of her first baby, Monica started to become afraid that she would cause harm to her. She would have unwanted thoughts and images of herself smothering or suffocating her baby. If she found herself in high places, she would have unwanted images of throwing her baby. To Monica these thoughts and images were repugnant and completely unacceptable – she was a caring and conscientious parent and these images were the exact opposite of how she wanted to behave. Monica came to the conclusion that having these thoughts and images meant that she was a terrible mother and couldn’t be trusted to be alone with her baby. As much as she was able to, she tried to push these thoughts away. To keep her baby safe Monica insisted that her husband be responsible for most of the child’s care. If she could not avoid looking after her baby, then she prayed in her mind that nothing bad would happen. She didn’t tell anyone about her thoughts in case she was locked away.

Monica was initially reluctant to see a psychologist as she thought she would have her baby taken away from her. She and her therapist discussed intrusive thoughts and together they developed alternative hypotheses about what was happening to her. One theory was that “I’m a terrible mother and I can’t be trusted to be alone with my child”. The alternative theory was “I would never harm my baby, but my anxiety problem makes me doubt this”. They looked at the evidence for these two theories, but although Monica hoped the second was true, she didn’t really believe it. Monica and her therapist drew up a list of situations that she had been avoiding and Monica practiced exposing herself to these, initially in her therapy sessions and later as homework. Tasks like feeding or bathing her baby initially caused her tremendous anxiety but with encouragement she persisted. She experimented with what happened when she allowed her intrusive thoughts to be present rather than pushing them away. One of the most helpful things that she did was to test her belief that she was a terrible mother by asking other mothers to complete an anonymous survey about the thoughts and images that they experienced. She was relieved to find that she was far from alone. By the end of therapy Monica was able to spend time alone with her baby without fear of harming her. She wrote herself a letter “Your OCD is like an over-cautious friend – it’s looking out for you but it’s trying too hard. You’re a good mother, and the OCD only developed because you care so much.”

Obsessions are recurrent and persistent thoughts, urges, or impulses. People with OCD experience them as intrusive and unwanted – they are unacceptable or repulsive – and they tend to provoke feelings of anxiety. When someone with OCD has an obsessive thought they tend to try to suppress or neutralize it with some other thought or action. Obsessions in OCD tend to follow common themes. Some of the most common obsessive themes are:

Compulsions are actions, rituals or behaviors that are done to relieve the anxiety or distress caused by the obsessions. Compulsions can be overt / external (visible things you do in the outside world) or covert / internal (things you do in your own mind). People with OCD usually perform their compulsions to prevent the thing they are thinking about from happening, to make sure that they have at least done everything within their power to prevent it from happening, or to feel less anxious. People with OCD might realize that their actions are not rational but will feel compelled to carry them out anyway. Examples of common compulsions include:

There is no single cause for OCD. Some of the factors that make it more likely that a person will experience OCD include:

Cognitive behavioral therapy (CBT) is always very interested in what keeps a problem going. This is because if we can work out what is keeping a problem going, we can treat it by intervening to interrupt this maintenance cycle.

The important message from CBT is that it is not the intrusions that lead to distress but rather it is the meaning that we bring to them (the way that we interpret them) that leads to such negative consequences [7].

Once you have interpreted particular thoughts as personally significant, you are likely to take certain forms of action to keep yourself or others safe. These include: 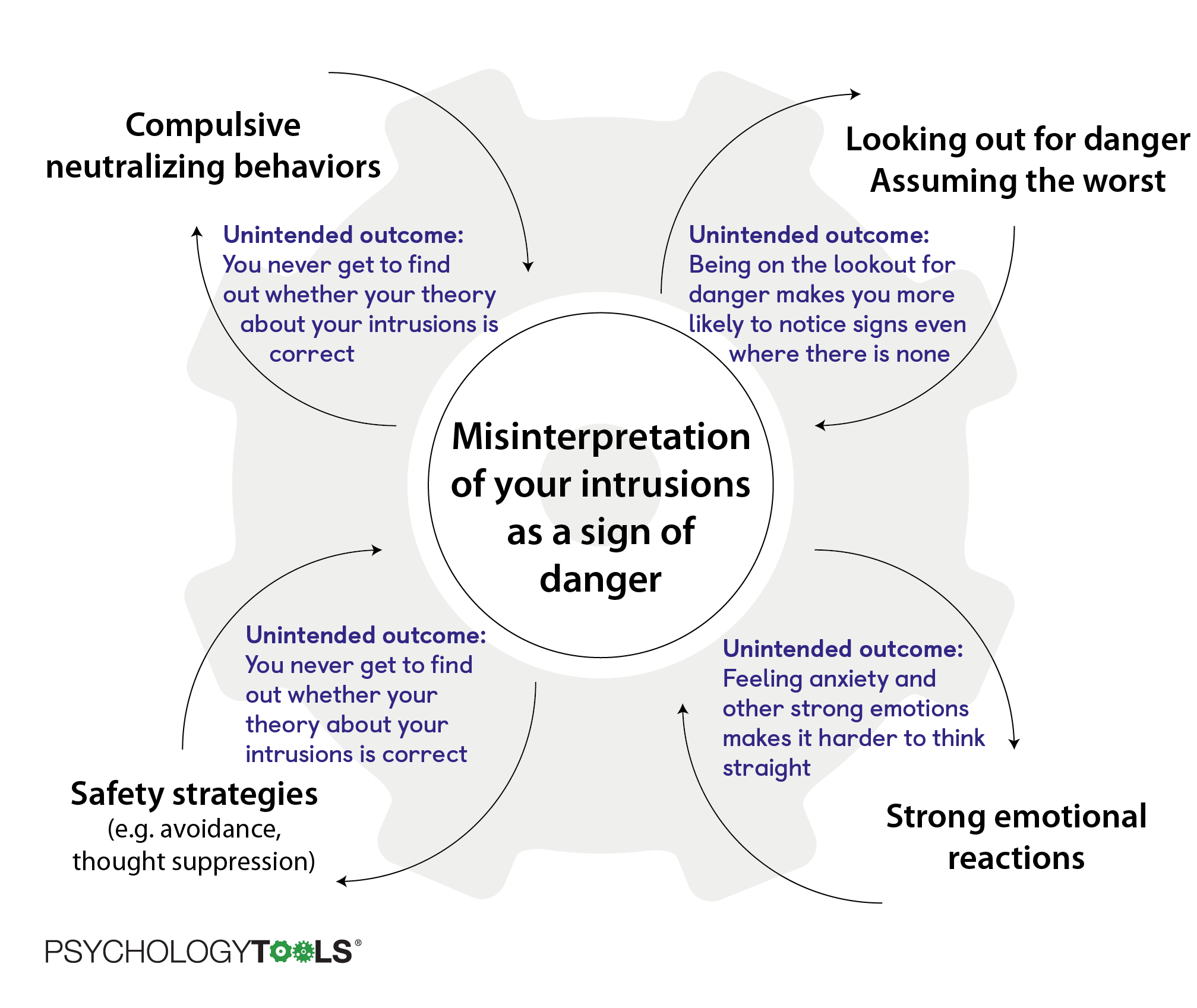 Effective psychological treatments for OCD include cognitive behavioral therapy (CBT) and exposure and response prevention (ERP). The UK National Institute of Health and Care Excellence guideline for OCD recommends that if a client presents with OCD where the degree of impairment is mild they should be offered a minimum of 10 therapist hours, with treatment length increasing in line with OCD severity [8].

How can I overcome my OCD?

There are lots of steps that you can take for yourself that will help you to overcome obsessive compulsive disorder. Treatment approaches for OCD can broadly be divided in behavioral (typically exposure and response prevention) and cognitive-behavioral types, although they overlap to a considerable degree.

Helpful techniques no matter what approach you choose

[10] Salkovskis, Paul. (2019). Yes, that’s right. Often that means doing rather different stuff such as not using TRs due to potential for confusion between intrusions and appraisals. Just saying in the C bit of CBT typically don’t use TRs. Book has details! [Tweet] Retrieved from https://twitter.com/psalkovskis/status/1162084431454179330