A panic attack is a sudden surge of intense fear which is accompanied by strong body feelings (such as your heart beating rapidly, or finding it hard to breathe) and catastrophic thoughts (such as thinking that you will lose control or die). Panic attacks feel terrifying, but they are not dangerous. People who worry about their panic, and who take steps to try to prevent the possibility of having more, are said to suffer from panic disorder. It is thought that between 1 and 3 people out of every 100 will experience panic disorder every year [1, 2] and many more than that will have a panic attack at least once. Cognitive Behavioral Therapy (CBT) is an extremely effective treatment for panic disorder: about 80% of people with panic disorder who complete a course of CBT are panic-free at the end of treatment [3].

What are panic attacks and panic disorder?

A panic attack is an episode of intense fear that sometimes comes out of the blue (for no apparent reason). It typically reaches a peak within minutes and involves feeling strong feelings in your body and your mind. Symptoms of panic include: 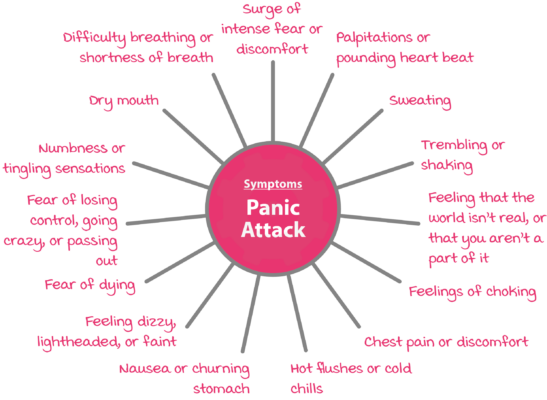 Ted’s fear that he would pass out

I had my first panic attack during a stressful time in my life. I had been rushing to get a job completed at work so that I could leave on time to visit my mother in hospital. I got stuck in traffic on the way to the hospital and worried that I would miss the visiting hours. At the hospital, I suddenly began to feel lightheaded and felt like I couldn’t breathe properly. A huge wave of fear came over me. I noticed myself getting hot and sweaty, and thought I might pass out. I had to leave the hospital and take deep breaths of fresh air until I calmed down. It all only lasted a few minutes but it had felt like forever. My Mom got better and was allowed to go home, but I experienced more panic attacks over the next few months. Each time they would come completely out of the blue, and I felt an overwhelming sensation of dread and fear. I could feel my heart race and my throat getting tight. I worried that I wouldn’t be able to get enough air and would pass out, and only felt better when I got out in the open. I tried to manage by avoiding crowds and anywhere busy, and I took to doing my shopping at night when there were fewer people.

Have I had a panic attack?

If you ticked ‘Yes’ to at least four of the symptoms, it is likely that you have had a panic attack. Remember that panic attacks are very common, and are not dangerous. Having a panic attack does not mean that there is anything wrong with you, and you do not necessarily need to seek treatment unless you find yourself worrying about having more panic attacks to such a degree that it is interfering with your life.

Do I have panic disorder?

A diagnosis of panic disorder should only be made by a mental health professional. However, answering the screening questions below can give you an idea of whether a professional assessment might be helpful.

If you answered ‘Yes’ to a lot of these questions then you may be suffering from panic disorder. You might find it helpful to speak to your general practitioner, or a mental health professional about how you are feeling.

What happens when I have a panic attack?

Your brain is incredibly well evolved for detecting threats. Almost too well evolved: it operates on the better safe than sorry principle and would rather set off ten ‘false alarms’ than miss one real danger. Worse, it isn’t very good at telling the difference between real threats in the world versus imagined threats that you are just thinking about. It is easy for the alarm to be set off mistakenly. A panic attack is when your threat system has a ‘false alarm’ and detects a threat when there is none. It can do this automatically – without your conscious help – and it will set off your fight or flight response. If you experience any of the body symptoms of fight and flight for seemingly no reason, it can feel very frightening. Panic symptoms can be made worse by the thoughts you have about them. You try to make sense of the panic symptoms (“why are they happening?”, “what do they mean?”) but the catastrophic answers you come up with can make things seem even more frightening (“I’m having a heart attack”, “I’m losing control”). Your brain reacts to these catastrophic thoughts as additional threats, and your fight or flight response is triggered even more forcefully. 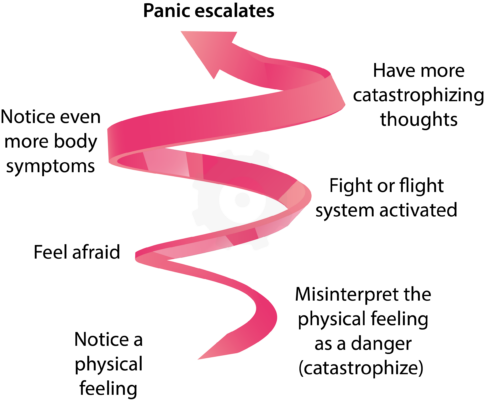 Why am I suffering from panic now?

Panic attacks are just the result of your fight or flight response being activated at the wrong time, but why are some people more prone than others to suffering from panic? There is no single cause, but some of the factors that make it more likely that you will experience panic attacks and panic disorder include:

There may be genes which predispose people to developing emotional problems in general, but no specific genes predispose people to developing panic. As we will see in the next section, no matter what causes panic, it is what keeps people having panic attacks that tends to be more important. Psychologists call these ‘maintenance factors’ are they are the focus of treatment.

Research studies have shown that Cognitive Behavior Therapy (CBT) is probably the most effective treatment for panic disorder [4]. CBT therapists work a bit like firefighters: while the fire is burning they’re not so interested in what caused it, but are more focused on what is keeping it going, and what they can do to put it out. This is because if they can work out what keeps a problem going, they can treat the problem by ‘removing the fuel’ and interrupting this maintaining cycle. A psychologist called David Clark identified the key parts that mean some people keep suffering from panic attacks [5]. Some of the things that psychologists now think are important in keeping panic going are:

Research has indicated that psychological therapy, or a combination of psychological therapy plus antidepressant medication, is the treatment of choice for panic disorder [6].  One of the most effective psychological treatments for panic is cognitive behavioral therapy (CBT) [4]. If CBT is delivered face-to-face then the optimal range is between 7 and 14 hours of therapy, typically in the form of weekly sessions of 1-2 hours. Guided and non-guided self-help are also appropriate treatments for panic disorder [7]. CBT is a popular form of talking therapy. CBT therapists understand that what we think and do affects the way we feel. Unlike some other therapies, it is often quite structured. After talking things through so that they can understand your problem, you can expect your therapist to set goals with you so that you both know what you are working towards. At the start of most sessions you will set an agenda together so that you have agreed what that session will concentrate on. Treatment for panic might include some of the following ‘ingredients’ which research trials have shown to be helpful:

The UK National Institute of Health and Care Excellence (NICE) guidelines for panic disorder [13] recommend that the only medicines that should be used in the longer-term management of panic disorder are selective serotonin reuptake inhibitors (SSRIs) and tricyclic antidepressants (TCAs). Benzodiazepines are associated with a poorer long-term outcome and should not be prescribed for the treatment of panic disorder.

This article was written by Dr Matthew Whalley and Dr Hardeep Kaur, both clinical psychologists. It was last reviewed on 2021/12/08.