Many of us will experience trauma at some point in our lives. With time, most people recover from their experiences without needing professional help. However, for a significant proportion of people the effects of trauma last for much longer, and they develop a condition called post-traumatic stress disorder (PTSD). It is thought that between 3 and 5 people out of every 100 will experience PTSD every year [1]. Fortunately, there are a range of excellent psychological therapies for PTSD.

A traumatic experience is one which is overwhelming, threatening, frightening, or out of our control. Common traumas include: 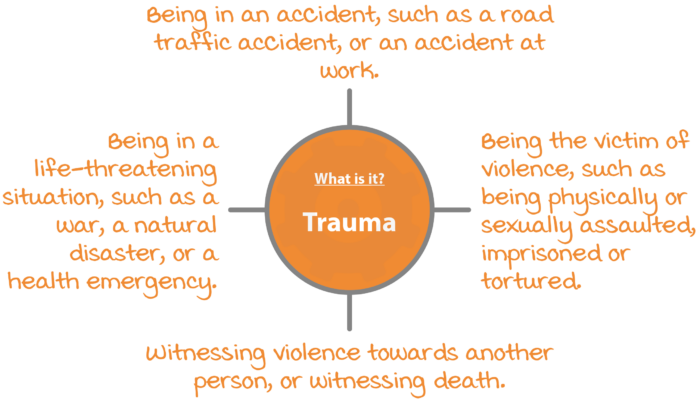 Some traumas are isolated one-off events that are unexpected and happen ‘out of the blue’. Other traumas are frightening in different ways: they are expected, anticipated, and dreaded. Some people’s jobs expose them to trauma, for example military or emergency service personnel often experience or witness distressing events. Children experience trauma too – and the effects can be even more profound and long-lasting if the people who were supposed to care for them were responsible for causing harm.

What is post-traumatic stress disorder (PTSD)?

It is normal to be affected by traumatic experiences. If you have been through a trauma you might feel shocked, scared, guilty, ashamed, angry, vulnerable, or numb. With time most people recover from their experiences, or find a way to live with them, without needing professional help. However, for many people the effects of trauma last for much longer and may develop into post-traumatic stress disorder (PTSD). Symptoms of PTSD can be split into groups [2]. 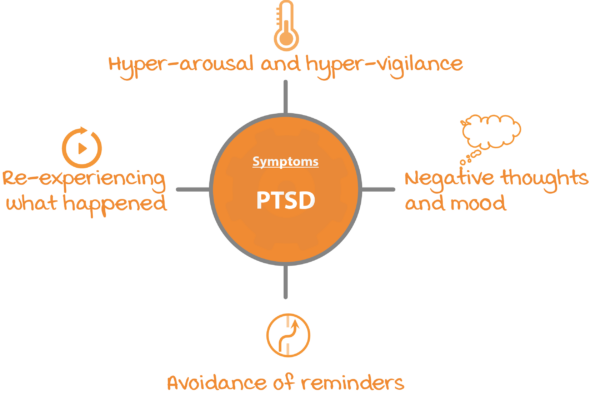 Re-experiencing the trauma means that memories of the event play over and over in your mind. These memories can come back as ‘flashbacks’ during the day, or as nightmares at night. The memories can be re-experienced in any of your five senses – you might see images of what happened, or experience sounds, smells, tastes, or body sensations associated with the trauma. Emotions from the trauma can also be re-experienced and many trauma survivors say that it can feel as though the events are happening over and again. Re-experiencing symptoms include:

It is common to be ‘on edge’ or ‘on guard’ following a trauma. For people who have PTSD these feelings tend to persist for even longer than normal. You might find it very difficult to relax, or find that your sleep is affected. Arousal symptoms include:

A normal human way of dealing with physical or emotional pain is to avoid it, or to distract ourselves. When you have PTSD you might try to avoid any people, places, or any other reminders of your trauma. You might try very hard to distract yourself in order to avoid thinking about what happened. Avoidance symptoms include:

What is Complex PTSD (CPTSD)?

Since PTSD was first identified in the 1970’s, research has shown that the kinds of symptoms that survivors of trauma have can look a bit different depending on:

When people experience these symptoms as well as PTSD, mental health professionals might label it Complex PTSD [3, 4]. You can think of it as ‘PTSD Plus’. Research indicates that many of the treatments that are effective for PTSD are also effective for people with Complex PTSD.

People with PTSD experience strong unwanted memories of their trauma, to the point where it can feel as though the trauma is happening again right now in the present moment. As a result, people with PTSD often feel on-edge and on the lookout for danger. Sushma describes what suffering from PTSD can be like. Some people find that reading about other people’s trauma can be upsetting, so feel free to skip this section until a time comes when you feel more able. Remember, though, that learning about trauma cannot harm you – it is the first step in overcoming PTSD.

I grew up in a chaotic household. My father and brothers were violent and in and out of prison, and my mother was a mixture of critical and neglectful. When I was fourteen, a boy in my local park gave me alcohol and then raped me. I felt terrified during the attack and seemed to be frozen to the spot. I didn’t tell my parents what had happened because I knew they would blame me and I was worried about how they would react. I didn’t go to therapy until I was in my late twenties. When I did I was having daily flashbacks of the attack, and of the many of the other horrible things that had happened to me before and since. I would wake at night, terrified but unable to move, and I would sometimes wet the bed, which I was terribly ashamed of. When I got reminded of traumatic things I would sometimes dissociate so strongly that I would almost ‘forget’ where I was, and would feel like a terrified child again. I was convinced that I was a bad person – I thought “I’m rotten to the core” – and that I had deserved everything that had happened to me. I punished myself by not getting enough rest and was so self-critical. At the start of therapy, I was not very hopeful of recovering, and didn’t even think that I deserved to get help.

Do I have PTSD?

PTSD should only be diagnosed by a mental health professional or a doctor. However, answering the screening questions below can give you an idea of whether you might find it helpful to have a professional assessment.

If you answered “yes” to the first question, and to three or more of the other questions, you may be suffering from post-traumatic stress disorder. You might find it helpful to speak to your general practitioner, or a mental health professional about how you are feeling.

The main cause of PTSD and Complex PTSD is being exposed to traumatic, life-threatening, or frightening events. Not everybody who experiences a trauma goes on to develop PTSD and it is not your fault if you suffer from it. Some of the things that make people more likely to develop PTSD after a traumatic experience include:

Cognitive Behavioral Therapy (CBT) is a popular evidence-based psychological therapy. It is always very interested in what keeps a problem going. This is because by working out what keeps a problem going, they can treat the problem by breaking the cycle. Psychologists Anke Ehlers and David Clark saw PTSD as a puzzle: why should people with PTSD feel a current sense of threat even though the terrible thing has already happened? They identified three big reasons [5]: 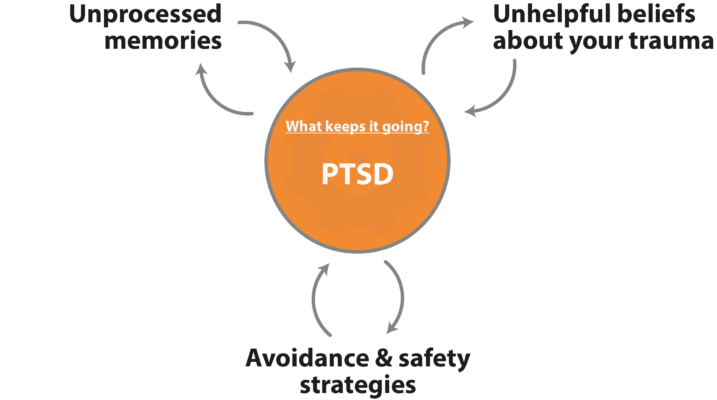 Psychological treatments for PTSD which have strong research support include:

Although the mechanics of these therapies all differ slightly, they all contain some common ‘ingredients’:

The UK National Institute of Health and Care Excellence (NICE) guidelines for post-traumatic stress disorder [10] found that there is evidence that a class of medications called selective serotonin reuptake inhibitors (SSRIs: commonly known as ‘antidepressants’) and venlafaxine are effective in treating PTSD. However, these medications are less effective than psychological treatments and the NICE guidelines recommend that they should not be offered as a first-line treatment for PTSD. The NICE guidelines also found some evidence that antipsychotic medication may be helpful as an adjunct to psychological therapy in some cases.

This article was written by Dr Matthew Whalley and Dr Hardeep Kaur, both clinical psychologists. It was last reviewed on 2021/12/08.