Many people have concerns about how they look, but if worrying about your appearance becomes very distressing or you can’t stop thinking about it, you may be suffering from body dysmorphic disorder (BDD). It’s quite a common problem: research suggests that between 1 and 3 people out of every 100 suffer from it [1]. Fortunately, effective treatments have been developed for BDD, including cognitive behavioral therapy (CBT).

What is body dysmorphic disorder?

Body dysmorphic disorder (BDD) centres on the belief or felt sense that there is something wrong with how you look. This can be very upsetting and might take up a lot of your time and attention.

Other people might say that they can’t see the flaws you worry about or think they are very minor. However, because you see it as a problem, you spend more and more time trying to figure out ways to solve it.You might try to be sure about how you appear, hide the way you look, or want to change your appearance.You might think that unless you can change how you look, you won’t be able to have the relationships you want, be happy, or do the things that you want to do.

Common difficulties in BDD include: 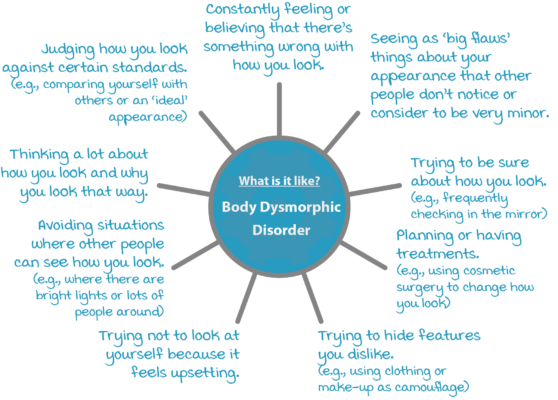 What is it like to have body dysmorphic disorder?

Alice struggled with BDD. Her story illustrates what it can feel like to have BDD.

Alice’s feelings about her teeth

I was diagnosed with BDD at the age of 19. During my first term at university, my anxieties about how I looked started to spiral out of control: I was certain that my ears were far too big and my hair was thinning. My biggest worry was my teeth – all I could think about was how bumpy and yellow they looked, and I was terrified that people would think they were disgusting. I was sure that I would end up alone because of my appearance. My family has been so important to me, so the idea of not having a family of my own felt devastating. I thought my only hope was getting my teeth whitened but I was too ashamed to go and see a dentist.

I tried my best to keep my teeth hidden. I kept my mouth almost closed when I spoke, didn’t show my teeth when I smiled, and avoided laughing. I thought that being nearer to yellow things would make my teeth more noticeable, so I stopped wearing yellow clothes or eating yellow food. Once, my friends discussed teeth whitening in front of me – I was sure that they were telling me indirectly how bad my teeth looked. It was mortifying. It became so exhausting to be around people that I started withdrawing and spending more time alone. In the past, I would check my teeth by running my tongue over them or looking at them in the mirror, but as my body image got worse, I tried to avoid them as much as I could. Even brushing my teeth became really upsetting. I couldn’t cope and I ended up leaving university.

Do I have body dysmorphic disorder?

BDD should only be diagnosed by a mental health professional or a doctor. However, answering the screening questions below can give you an idea of whether you might find it helpful to have a professional assessment.

If your main concern is that you aren’t thin enough or that you might gain weight, it may also be worth having a further assessment to see if you are suffering from an eating disorder.

Research evidence suggests that there may be genes which make you more likely to develop emotional problems in general. However, none have been identified for BDD specifically.

Cognitive behavioral therapy (CBT) is one of the most effective treatments for BDD. Research indicates that medication can also be helpful, either alone or alongside CBT [5].

CBT therapists approach problems a bit like firefighters: while the fire is burning they’re not so interested in what caused it, but are more focused on what is keeping it going, and what they can do to put it out. This is because if they can work out what keeps a problem going, they can treat the problem by interrupting this maintaining cycle.
Cognitive behavioral models of BDD describe the ‘parts’ that stop BDD from getting better [2, 6, 7]. These include:

CBT is a popular form of talking therapy. CBT therapists understand that what we think and do affects the way we feel. Unlike some other therapies, it is often quite structured. After talking things through so that they can understand your problem, you can expect your therapist to set goals with you so that you both know what you are working towards. At the start of most sessions, you will set an agenda together so that you have agreed what that session will concentrate on.
‘Ingredients’ of effective CBT treatment for body dysmorphic disorder include:

Medical treatments are usually recommended as a second-line treatment for BDD, either for those who don’t want CBT, haven’t responded to CBT, or in combination with CBT (for more severe cases of BDD). The UK National Institute for Health and Care Excellence (NICE) guidelines recommend a class of medications called Selective Serotonin Reuptake Inhibitors (SSRIs) such as escitalopram or sertraline as medicinal treatments for BDD [8].

This article was written by Dr Emma Baldock and reviewed by Dr Matthew Whalley, both clinical psychologists. It was last reviewed on 2022/11/24.