The aim of a formulation is to help the client and therapist to come to a shared understanding of what a client is experiencing. The Panic Formulation worksheet, based on David Clark’s influential cognitive model of panic, enables therapists to explore the cognitive, affective, somatic, and behavioural components responsible for the onset and maintenance of a client’s panic attacks. 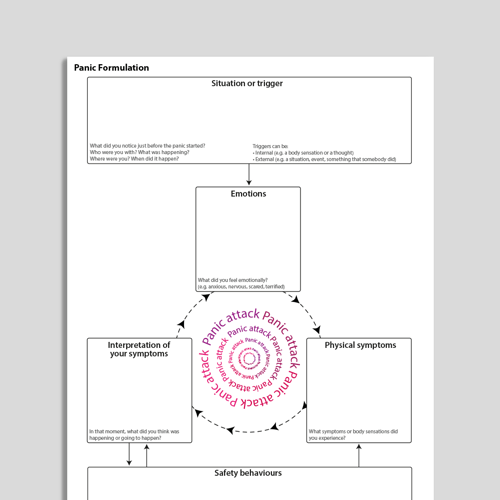 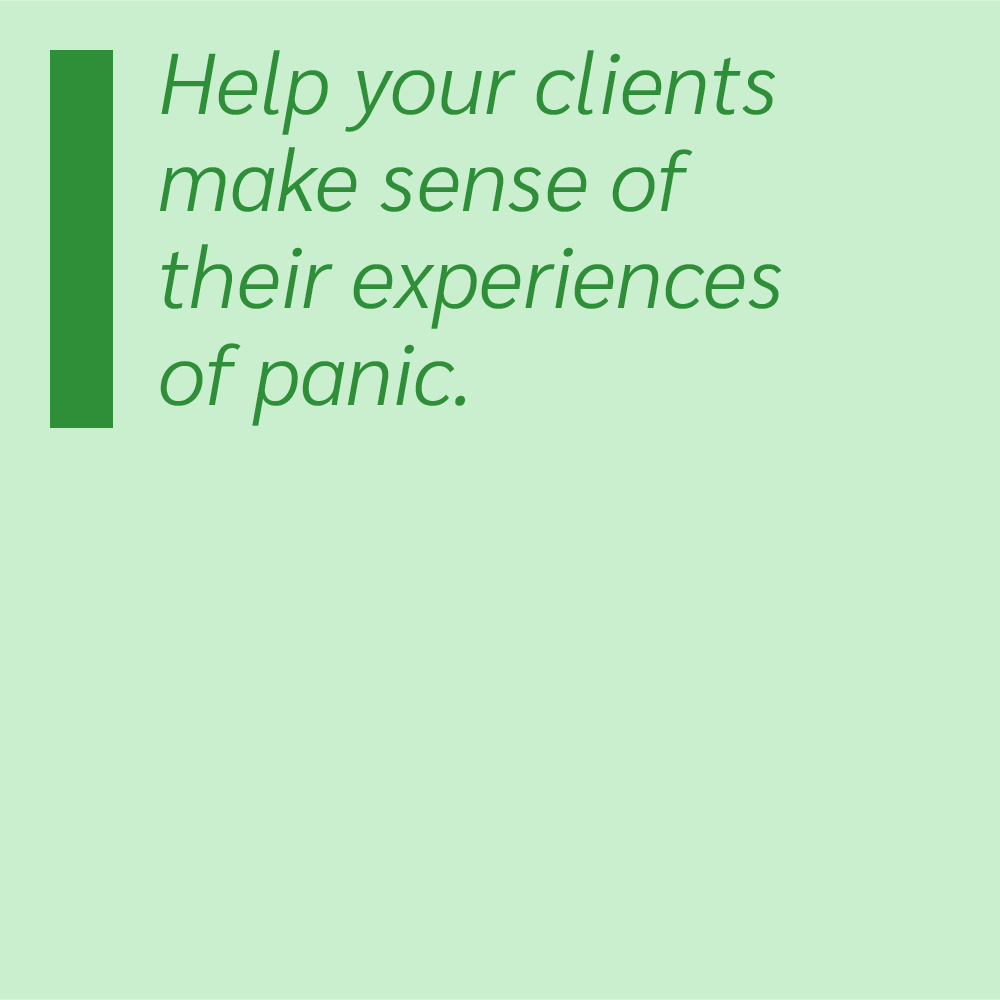 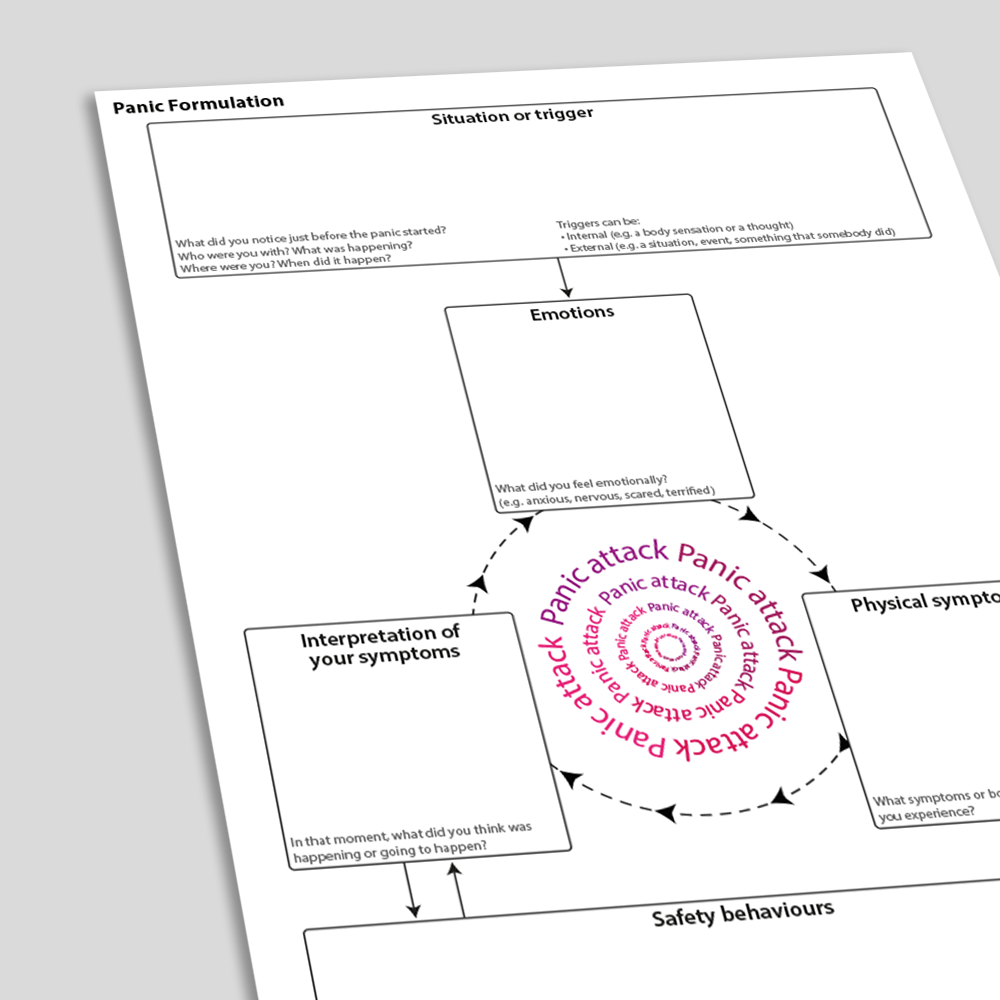 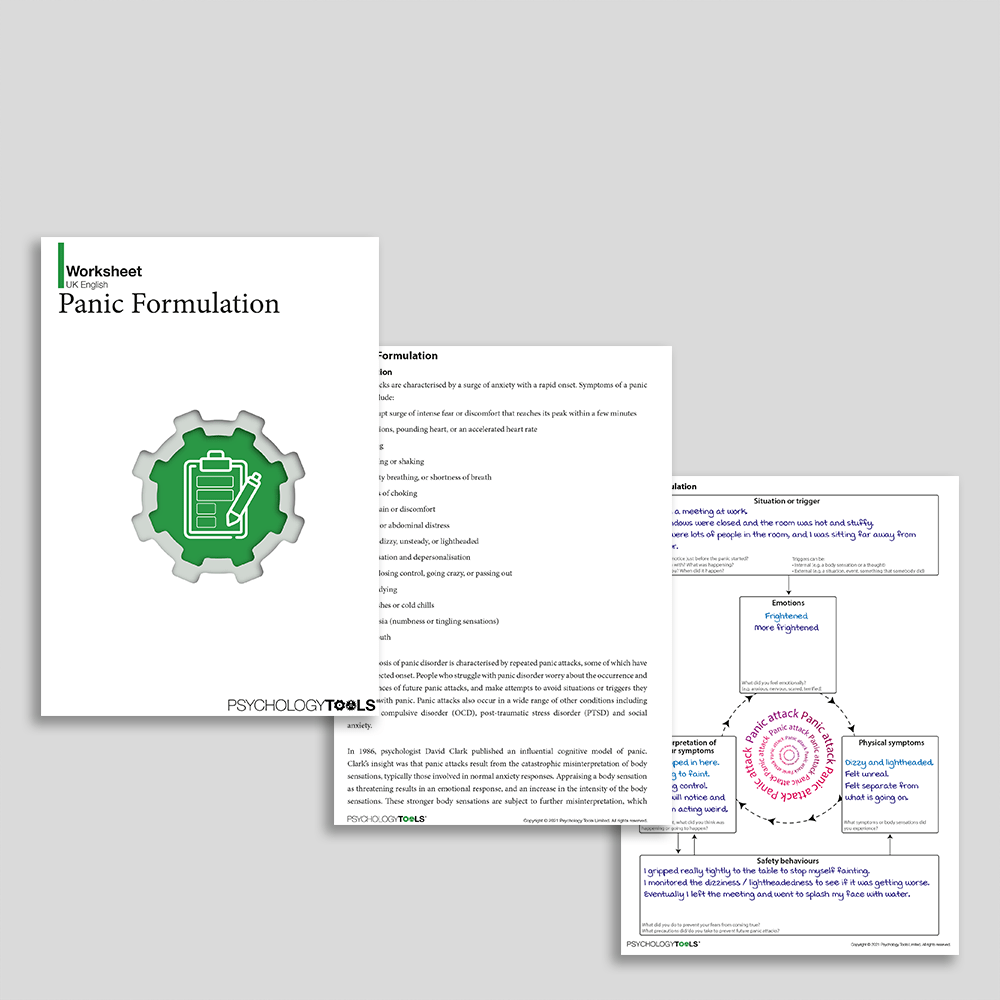 Panic attacks are characterized by a surge of anxiety with a rapid onset. Symptoms of a panic attack include:

The diagnosis of panic disorder is characterized by repeated panic attacks, some of which have an unexpected onset. People who struggle with panic disorder worry about the occurrence and consequences of future panic attacks, and make attempts to avoid situations or triggers they associate with panic. Panic attacks also occur in a wide range of other conditions including obsessive compulsive disorder (OCD), post-traumatic stress disorder (PTSD) and social anxiety.

In 1986, psychologist David Clark published an influential cognitive model of panic. Clark’s insight was that panic attacks result from the catastrophic misinterpretation of body sensations, typically those involved in normal anxiety responses. Appraising a body sensation as threatening results in an emotional response, and an increase in the intensity of the body sensations. These stronger body sensations are subject to further misinterpretation, which results in stronger emotional and physiological responses. Clark’s model explains how mild feelings of anxiety can quickly escalate into intense feelings of panic.

Citing Seligman (1988), Clark & Salkovskis (2009) describe a ‘puzzle’: “many panic disorder patients persist in maintaining distorted beliefs about their body sensations despite numerous experiences that would appear to contradict their fearful beliefs”. For example, a client who is worried about going crazy and losing control may persist in this belief despite multiple panic attacks in which they remained in control of their behavior. Two psychological processes which they propose to account for the persistence of misinterpretations in panic are:

Psychological therapy, most notably cognitive behavioral therapy (CBT), is the recommended treatment for panic disorder (NICE, 2011; Pompoli et al, 2016). Two of the most popular manualized interventions for panic are Clark & Salkovskis (1986, 2009) and Barlow & Craske (2000). Components of effective treatment for panic include:

The Panic Formulation worksheet enables therapists to explore the cognitive, affective, somatic, and behavioral components responsible for the onset and maintenance of a client’s panic attacks.

“One of the first steps in cognitive therapy for panic is to come to an understanding of how your panic works. Could we look at one of your recent panic attacks and see if we can work out what might have been happening for you?”

The aim of a formulation is to help the client and therapist to come to a shared understanding of what a client is experiencing. It is most helpful to encourage clients to identify a specific example of a recent time that they experienced panic. If clients struggle to do so, it may be helpful to encourage to them to use a panic self-monitoring record.

1. Situation or trigger. Help the client to become aware of internal or external triggers that precipitated their panic attack. Internal triggers can include thoughts, emotions, or body sensations. External triggers might include things that the client saw, heard, or experienced. Clients can also be helped to make links between the trigger and their initial appraisal of it (in which case information can be recorded in the ‘interpretation’ box below). Some clients may feel that their panic attacks come ‘out of the blue’ and this section can be used to help clients explore potential contextual triggers. Although this section focuses mainly on precipitating factors, therapists should be aware of contextual factors that may be predisposing their client to be near their ‘panic threshold’ and more likely to have panic events triggered.

The central section of the formulation is designed to help clients to identify the separate affective, physical, and cognitive components of their panic attack. Clark’s cognitive model of panic proposes that an attack often begins when a trigger reaches awareness and is interpreted as a threat. This appraisal leads to feelings of apprehension and an increase in the physical symptoms of anxiety, which are then subject to further misinterpretation. Clinicians may find it helpful to guide clients around the ‘emotions’, ‘physical sensations, and ‘interpretation of your symptoms’ sections a number of times to elaborate the escalation of the panic attack. It is not necessary to stick rigidly to a specific starting point or sequence in this central section, but more helpful to respond to the client’s narrative of what happened and to use the diagram to structure their experience.

5. Escalation cycle. Panic attacks escalate when body sensations are misinterpreted as a threat, leading to feelings of apprehension and anxiety, and increases in the intensity of the body sensations, which are then subject to further misinterpretation and continuation of the cycle. By focusing on the cognition–emotion–body–cognition cycle, clinicians can help clients notice how the panic attack intensifies in understandable ways as they actively try to make sense of their experience.

6. Safety behaviors. These are actions that people take to prevent feared catastrophes from occurring. They are often effective in reducing fear in the short-term, but may ultimately prolong panic by preventing disconfirmation of the client’s catastrophic appraisals. When constructing an idiosyncratic formulation for panic, the therapist should aim to: gather information about things that the client does ‘in the moment’ to prevent their fears from coming true, gather information about precautions the client takes to prevent future panic attacks, and help clients to understand how safety behaviors can operate to maintain catastrophic appraisals. It is often helpful to start by gathering information about safety behaviors related to the specific panic attack in question, and then to broaden out the questions to explore a client’s complete repertoire of safety behaviors.

7. Explore the consequences of safety behaviors and implications for treatment. At this stage of an individual formulation, it is helpful for clients to understand the potential consequences of their coping strategies, as these will have a bearing upon later treatment approaches.